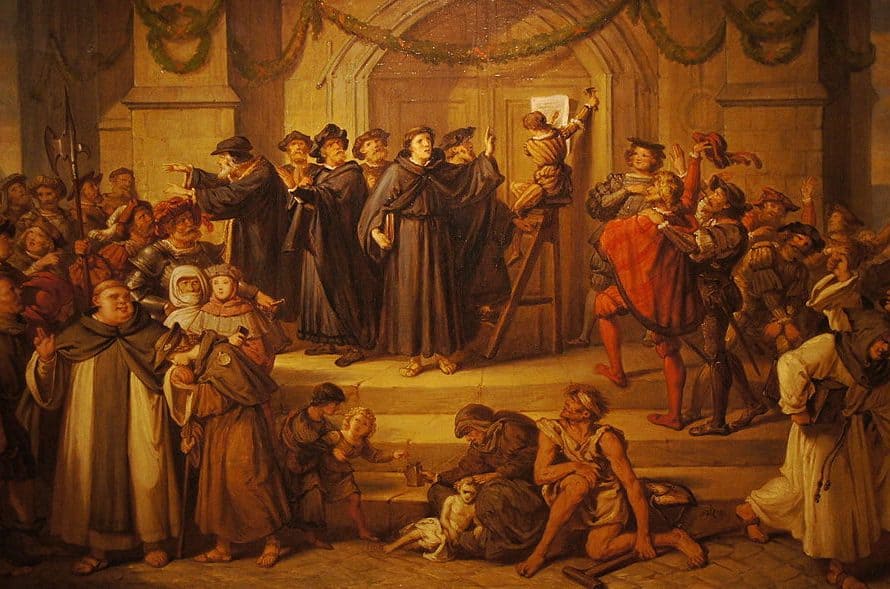 1878 Julius Hübner painting of Luther nailing 95 theses to the door of All Saints' Church, Wittenberg.

Less famous than the Sistine Chapel, St. Peter’s Basilica in Rome owes at least some of its brilliance to the same man: Renaissance artist Michelangelo Buonarroti.

Through windows at its base, light pours into the dome of St. Peter’s from every direction, bringing to life its manifold frescoes and its gold and blue rays, which lead the eye upward to heaven. Below the windows, written in Latin with blue letters painted on gold, are words from Matthew 16:18-19: “You are Peter and upon this rock I will build my church, … and I will give you the keys to the kingdom of heaven.”

Of course, these words sit at the base not only of the dome at St. Peter’s Basilica, but also at the foundation of the medieval papacy’s claim to authority over the church. During the 16th-century Reformation, Martin Luther and other Reformers ousted the Pope’s claim to power, pointing instead to faith in Christ as the church’s one foundation.

In 1505, the “Warrior Pope” Julius II—one of Michelangelo’s sponsors, for whose tomb the artist crafted his famous sculpture of Moses—decided to demolish the original basilica and replace it with architecture of the grand Renaissance style. Attempts to raise funds for the construction of this new basilica would, in 1517, ignite the Reformation by provoking Luther to pen his 95 Theses. Regardless, the Renaissance Popes trudged forward with construction of the new building. And although Michelangelo didn’t get to see the project completed before his death in 1564, his genius as an architectural designer can be viewed today by visitors to the site.

The fact that Michelangelo played a large part in the design of St. Peter’s Basilica—a building project, as noted above, criticized by Luther himself—fits well into one common theory about the relation between Renaissance and Reformation. This theory was popularized among evangelical Christians by Francis Schaeffer in his book, How Should We Then Live? Not without reason, Schaeffer claimed that the Renaissance stood in opposition to the Reformation, the former centered on man and the latter centered upon God as revealed through His Word.

However, as correctly argued by James R. Payton, Jr., in his book, Getting the Reformation Wrong, this view misinterprets the relation between Renaissance and Reformation. Seeing these two movements in simple opposition is, well, too simple. In fact, the Renaissance—a roughly 13th-to 17th-century rebirth of art and learning, which drew especially from the well of ancient Greece and Rome—often fed into the Reformation. For example, during the same period that Michelangelo supported the papal church with his artistic talents, the German Renaissance artist Lucas Cranach the Elder became a mentor and friend to Luther—a relationship described in historian Steven Ozment’s book, The Serpent and the Lamb.

But the Renaissance wasn’t restricted to the visual arts. Renaissance humanists—not to be mistaken for the secular, atheistic humanists we meet today—made advances in the study of language, literature and history. Of course, staunch Catholics were among humanist ranks. But these advances in the humanities also impacted many Reformers, and humanism sometimes provided them with tools for challenging the papal church. For example, defenders of the Pope’s authority over Western Europe had often pointed to a supposedly ancient document, “The Donation of Constantine,” in support of their cause, but the humanist Lorenzo Valla correctly exposed the document as a forgery.

One Renaissance humanist, in particular, had a significant—though ambiguous—relationship with the Reformation. That humanist was Desiderius Erasmus of Rotterdam. A Dutchman born in 1466, Erasmus attacked meaningless ceremonies and the abuses of the late medieval church—sometimes satirically, as in his work, The Praise of Folly. But he also called people to sincere and personal faith, and enjoined a widespread knowledge of Scripture. In an age when most Bibles were in Latin, a language that few people understood, Erasmus encouraged biblical translation from the original languages. He applied the humanist cry, “ad fontes,” to the faith—that is, people should return to the Bible, “to the wellspring” of Christianity.

“Would that, as a result, the farmer sing some portions of [the Scriptures] at the plow, the weaver hum some parts of them to the movement of his shuttle, the traveler lighten the weariness of the journey with stories of this kind! Let all the conversations of every Christian be drawn from this source,” Erasmus wrote in the preface to his own new Latin translation of the Greek New Testament, published in 1516.

Erasmus’ translation, which was printed side-by-side with the Greek original, would be used by many Reformers to translate Scripture. In fact, inspired by Erasmus’ work, the English Reformer William Tyndale later proclaimed that, God-willing, he would see an English ploughboy learn more of Scripture than the average priest. And, using Erasmus’ New Testament, Tyndale soon afterward published a translation that has shaped English renderings of the New Testament up to the present day.

It is ironic, therefore, that Erasmus never became a Protestant Reformer himself, but remained a faithful supporter of the Roman church until his death in 1536. Yet, especially through his biblical scholarship, his efforts as a Renaissance humanist left an indelible impact on the Reformation—and, as a result, on our lives today.