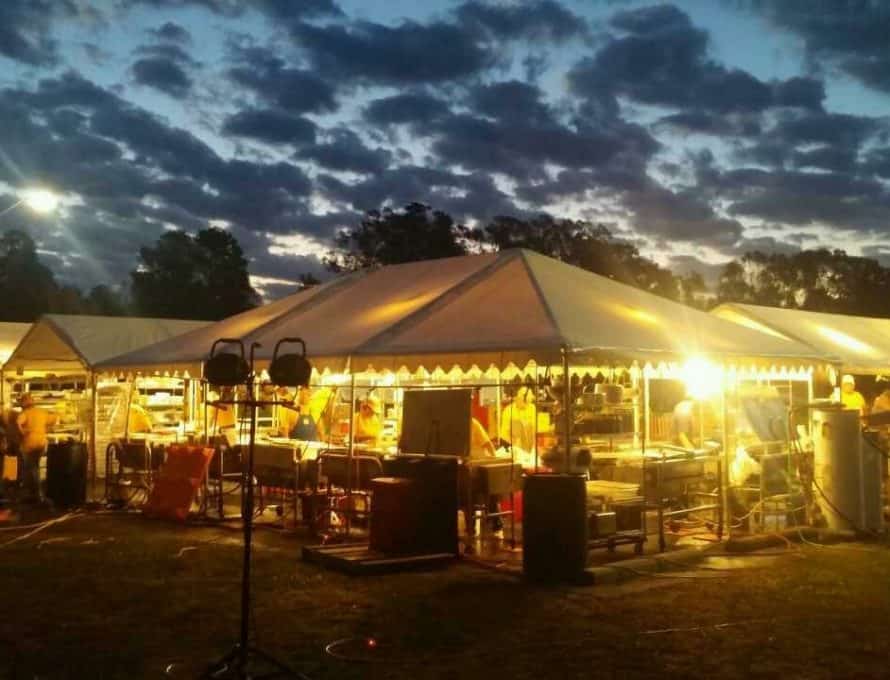 WHITEVILLE, N.C. - The sun rises over the mobile kitchen set up by Missouri Baptist Disaster Relief volutneers, who cooked thousands of meals each day while responding to Hurricane Matthew. DR photo

WHITEVILLE, N.C. – When he arrived in Jefferson City for disaster relief training Oct. 7, Jeremey Wallace had no idea just how soon his new found skills would be put into practice.

“I thought, ‘I’ll go to the training and see what this is all about,’” the pastor of Second Baptist Church, Bowling Green said. “Once I saw just how much Disaster Relief did, I knew this is something I wanted to participate in.”

Just days later, Wallace joined up with a convoy of dozens of Missouri Baptist Disaster Relief volunteers headed to Whiteville, N.C. to bring help, hope and healing after Hurricane Matthew made landfall. Wallace worked alongside other volunteers in “mass care,” or a feeding unit. The mobile kitchens Missouri uses are capable of producing tens of thousands of hot meals a day. Nine times out of ten, when the Red Cross delivers a meal in a disaster area, it’s been cooked by a Southern Baptist mass care volunteer. Workers are awake before the sunrises not only prepping meals, but sanitizing and cleaning every cooking and work surface before each meal.

“It’s just a massive operation,” he said. “I never realized just how big it was. We had a big parking lot and we filled the whole thing up.”

One of the quirks of volunteering for kitchen duty is that workers like Wallace never get to see the people they’re helping, unlike chainsaw crews or chaplains who are out in the field. On the way home, Wallace got his first actual look at the storm damage, despite being on site for 10 days and just a few miles from the disaster area.

“Two weeks after the hurricane, there were still homes with three feet of water,” he said. “The loss was eye-opening.”

Was all the work worth it?

“Within a few days of us being there, we’d already seen five salvations,” Wallace said.

The experience energized Wallace, and he was determined to involve his church in Disaster Relief in the future. That began on Sunday while he was still in North Carolina, as he preached to his congregation via video chat from 989 miles away.

“I got to show them my yellow shirt and show them what it’s all about,” he said.

The church raised almost $1,000 that morning and several have expressed interest in being trained in Disaster Relief.

The next training event will be at Pleasant Valley Baptist Church in Liberty, March 10-11, 2017. For more information and to donate to Disaster Relief, go to www.mobaptist.org/dr.