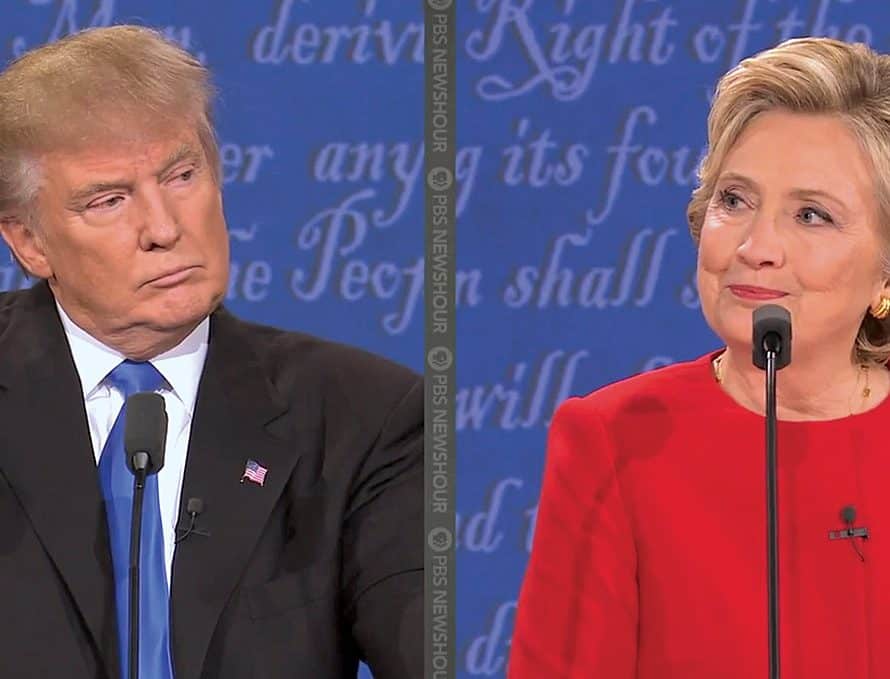 Race relations, personal ethics and terrorism were among the topics discussed by Donald Trump and Hillary Clinton Sept. 26 in their first head-to-head presidential debate. PBS screen capture from YouTube.

KANSAS CITY – It has become clear this week that there are no good candidates for President in this election cycle. In fact, some might say, “‘so-and-so’ is especially ‘no good’.”

A voter has basically five choices. The first choice is to not vote at all. This form of protest “voting” is often practiced in non-democratic societies where elections are rigged or where certain segments of a population are not permitted to run for office. Reports indicate that many did not vote in the recent Russian elections for this reason (The Economist, 92416, p. 50). Although I can understand why many would rather stay home, elections in the USA are not significantly corrupt. Staying home allows others to make our choices for us.

The second and third choices are about the same. There are two minor party candidates running for president: Gary Johnson of the Libertarian Party and Jill Stein of the Green Party: Although evangelicals agree with some issues held by them, the fact is that third party candidates remain a vehicle for voicing protest rather than bringing about change. Although 3rd party (and 4th and 5th party) candidacies are as old as the Republic, I would like to focus on the three instances where if the 3rd party candidate had not been in the race the loser might have won.

In 1848 Democrat Lewis Cass of Michigan was outgoing President James K. Polk’s choice to succeed him, as Polk decided to retire to Tennessee. Unfortunately, former President Martin Van Buren, a New Yorker, wanted to be President again. Snubbed by his party, Van Buren ran against Cass as a third party candidate in the general election. Van Buren polled 290,000 votes in the three-way race. Cass lost to Zachary Taylor, the Whig Party hero of the Mexican-American War, by less than 170,000 votes. Van Buren proved to be the spoiler.

In 1912 President William Howard Taft was running for reelection. Taft had succeeded his mentor Theodore Roosevelt when the latter decided to serve only one full term. Roosevelt did not think much of Taft’s presidency and so challenged him at the Republican Party Convention. Despite Teddy Roosevelt’s tremendous popularity with voters, the Republican Party declined to boot a sitting president from their ticket. Roosevelt formed the Bull Moose Party and ran as a third party candidate. The two former Republican colleagues together polled more than 1.4 million votes more than the Democrat challenger. However, the entry into the race by the 3rd party candidate Roosevelt, handed the victory to Democrat, Woodrow Wilson.

In 1992 George H.W. Bush, fresh off a decisive victory in the 1st Gulf War, seemed headed for an easy reelection. Enter businessman H. Ross Perot. This political neophyte, who had never held elective office, polled 19,103,882 votes, almost 1/3 of all the votes cast. Perot’s split of the Republican vote handed the election to Democrat Bill Clinton – and the rest is history.

Bill Clinton’s wife, Hillary Rodham, is the Democrat candidate for the White House and the fourth choice for voters this year. Mrs. Clinton has been an attorney, the First Lady of both Arkansas and America, the Junior Senator from New York, and the U.S. Secretary of State. Although very experienced in public affairs and more conservative than many in her party, she supports abortion, gay rights, homosexual marriage, open borders, increased immigration, free college education, limiting 2nd Amendment rights and deficit spending. She also suffers from the baggage of the past moral failings of her husband and her attempts to cover up his misconduct.

The fifth choice, of course, is none other than Donald J. Trump, billionaire businessman, TV reality show star and political novice. Like many evangelicals, I am concerned about Trump’s three marriages, ownership of casinos, coarse language and conduct with women, including the revelations last week. Parsing the religious core values of politicians, however, is dicey at best. Bill Clinton and Al Gore were Southern Baptists when they held office, but both supported abortion and gay rights. John F. Kennedy, Lyndon Johnson, Franklin Roosevelt and Bill Clinton all were rumored to have had extramarital affairs. Richard Nixon and Lyndon Johnson were known to have used profanity frequently while in office. George H.W. Bush and Ronald Reagan consumed beverage alcohol, while Richard Nixon and Barack Obama smoked tobacco. Donald Trump uses neither. Go figure. In addition, the three most personally pious presidents of the 20th Century (Woodrow Wilson, Herbert Hoover and Jimmy Carter) are not considered by most historians to have been particularly effective presidents.

The future of the Supreme Court always depends principally on the outcome of Presidential elections; this year’s race will have a nearly immediate impact on the fate of the Court. But the changes may only begin with a replacement for Scalia. Stephen Breyer is seventyeight, Anthony Kennedy is eighty, and Ruth Bader Ginsburg is eightythree. If all of them have to be replaced in the coming four years, the next President will have a Supreme Court legacy comparable to that of Richard Nixon, who filled four vacancies in little more than two years, or Ronald Reagan, who filled four vacancies in seven years, or Dwight Eisenhower, who filled five vacancies in five years…In an unusual move, in May, Donald Trump provided a list of eleven judges whom he would consider nominating to the Court. (He added ten more last week). The group includes state and federal judges, as well as a senator, Mike Lee, of Utah, all strongly conservative…The confirmation of any of the judges on Trump’s list would essentially return the Court to where it was before Scalia’s death (The New Yorker, 10316, “In the Balance,” pgs. 28 & 32).

My favorite candidate was Mike Huckabee but I liked some others as well. Unfortunately, the political party that most closely aligns with my values has chosen another candidate.

Yes, we can sit out the election, file a protest vote with a third party candidate, vote for a candidate whose views we do not share because we find the other candidate repulsive, or we can vote for the extremely flawed person who will best protect the values and interests of Evangelical Christians. Each voter must decide what are the most important issues for him or her. In other words, which candidate supports my pro-life, pro-marriage and fiscally conservative values? Therefore, in this year’s election I will reluctantly choose, not the “lesser of two evils,” but the best of the five available choices.

EDITOR’S NOTE: Robin Hadaway is professor of missions and dean of students at Midwestern Baptist Theological Seminary in Kansas City.