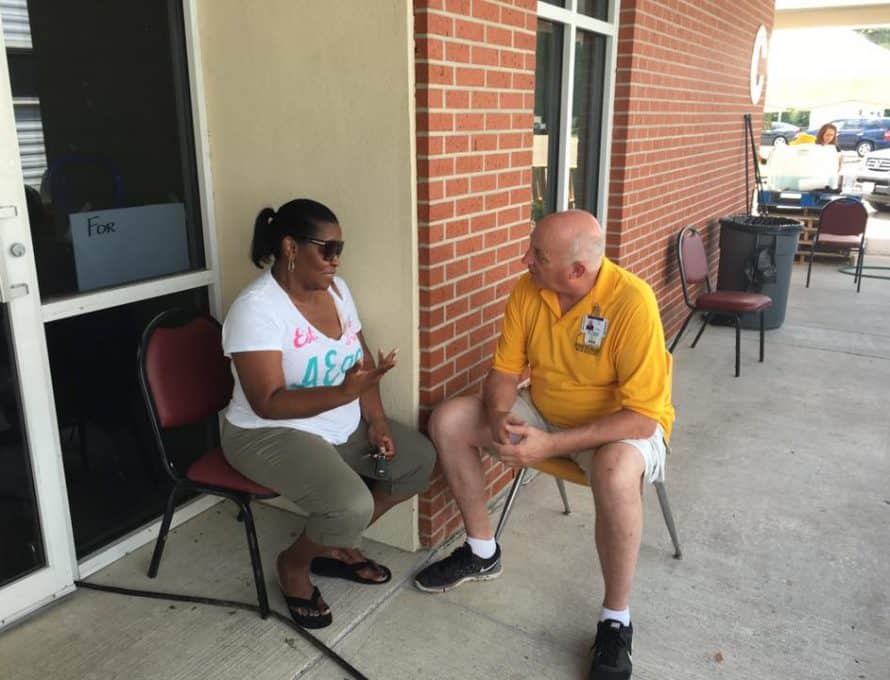 BATON ROUGE, La. – It’s not as glamorous as wielding a chainsaw or cranking through a few thousand meals a day, but chaplains are playing a role in Missouri Baptist Disaster Relief (DR) as volunteers bring help, hope and healing to Louisiana flood victims.

Tony Lee, a volunteer chaplain from First Baptist Church, Salisbury, worked alongside a crew doing mud out and debris removal. Like all DR chaplains, Lee was responsible not only for listening to the homeowner, but also for observing and building up the emotional state of the disaster relief teams. Working in high -stress disaster areas, the need arises more often than one might think.

“It’s not just the physical work in 104-degree heat,” Lee said. “There’s an emotion exhaustion too. Midway through the week we talked about things we had seen that had bothered us,” Lee said. “Some of it is hard to deal with, and it’s good to talk about it and get it off your chest. Seeing that much devastation can weigh on you. We try to have an upbeat attitude on our crew and sing and laugh, but you have recognized the effect it has on you to see people’s lives there on the curb.”

But that job is easy compared to finding the words to comfort someone whose entire home has been covered in muddy, smelly water.

“The first thing they want to know is who we are, and what we’re doing there,” Lee said. “Why did we come there from Missouri to help them in Louisiana? I just tell them that when I think about what God did with His son Jesus Christ, and how He laid down His life and took my sins upon Himself, that standard of love makes me want to do something. We choose to show that love by coming and serving them.

During this flood in Louisiana alone, Southern Baptist chaplains from 23 states including Missouri made 7,305 contacts, presented the Gospel 888 times, gave away 1,087 Bibles and helped lead 112 to faith in Jesus.

“Sometimes people will ask why God allows these bad things to happen,” Lee said. “God allows us to go through things so that He can show Himself in a mighty way. That’s what I pray: that He will show Himself even through disaster.”