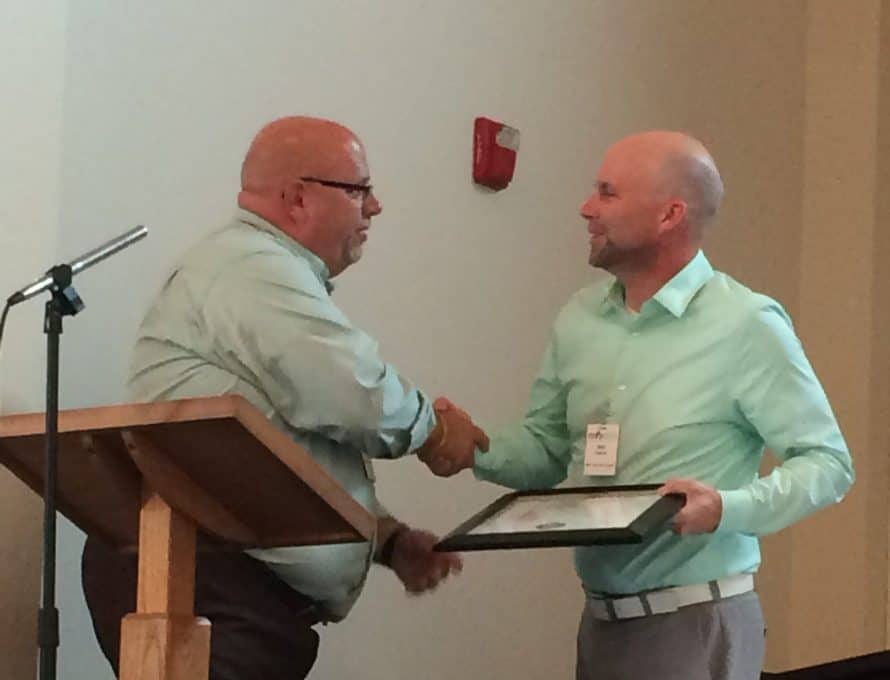 BRIDGETON – Missouri Disaster Relief Director Dwain Carter hands off an honorary plaque to MBC President Neil Franks. The plaque was given to the MBC by Jefferson County, in gratitude for the aid that Missouri Baptists provided through Disaster Relief after floods devastated the region in January. Pathway photo.

According to the proposed 2017 CP goal, 5 percent of the funds collected through CP is set aside in a “shared expenses” category, which is allocated for annuity protections and The Pathway. This has been part of the allocation since 2012.

From the remaining funds, 55.5 percent is allocated for MBC missions and ministries, as well as for MBC institutions, including the Missouri Baptist Children’s Home, Hannibal-LaGrange University and Southwest Baptist University. Additionally, 44.5 percent goes to Southern Baptist Convention (SBC) ministries. This reflects an increase in giving to SBC ministries, reflecting the MBC’s attempt to allocate 50 percent of CP funds between state and national ministries by 2020.

The proposed 2017 Executive Board budget projects a state income of $7,074,164, which will be allocated for “shared expenses” and for MBC ministries and missions. This does not include funds to be used by MBC entities.

Alongside approving this budget, the executive board authorized the formation of a “10-member Cooperative Program Allocation Task Force” to be appointed by the MBC president. The task force will “study future allocations for Cooperative Program support of the cooperative ministries, including the SBC, MBC, and its entities.” The board recommended that the task force include two MBC officers, three executive board members, and one MBC entity head and requested that the task force report on their progress in December.

• The board approved a plan to establish a Hannibal-LaGrange University extension center at the MBC’s Baptist building in Jefferson City.

• The board recommended to the MBC that the convention authorize a special offering during its annual meeting, Oct. 25, which will help to fund the St. Louis Metro Baptist Association’s “Good Neighbor Initiative.” During the executive board meeting, Darren Casper – associate executive director for the association – shared about this initiative, which will work to reach refugees for Christ in the St. Louis metro area. This ministry coincides with the association’s 200th anniversary.

• The executive board approved “the use of general reserve funds, up to $100,000, to complete the renovation of the parking lot project” outside the Baptist building, as well as renovations in the building.

• The board approved organizations that will set up exhibits at the MBC annual meeting in October.

• Board members recommended that the 2018 MBC annual meeting be held Oct. 22-24 at Crossway Baptist Church in Springfield.

• The executive board extended the MBC’s missions partnership with Mexico’s Regional Baptist Convention of Puebla and Tlaxcala to Dec. 31, 2020. This corresponds with the Mexican convention’s goal to end a church-multiplication initiative by that date.

• The executive board adopted an updated form for requesting speakers, publications or ministry organizations for MBC events and conferences. They also requested that the “MBC Pastor’s Conference officers, WMU and other auxiliary organizations” use this form while planning events.