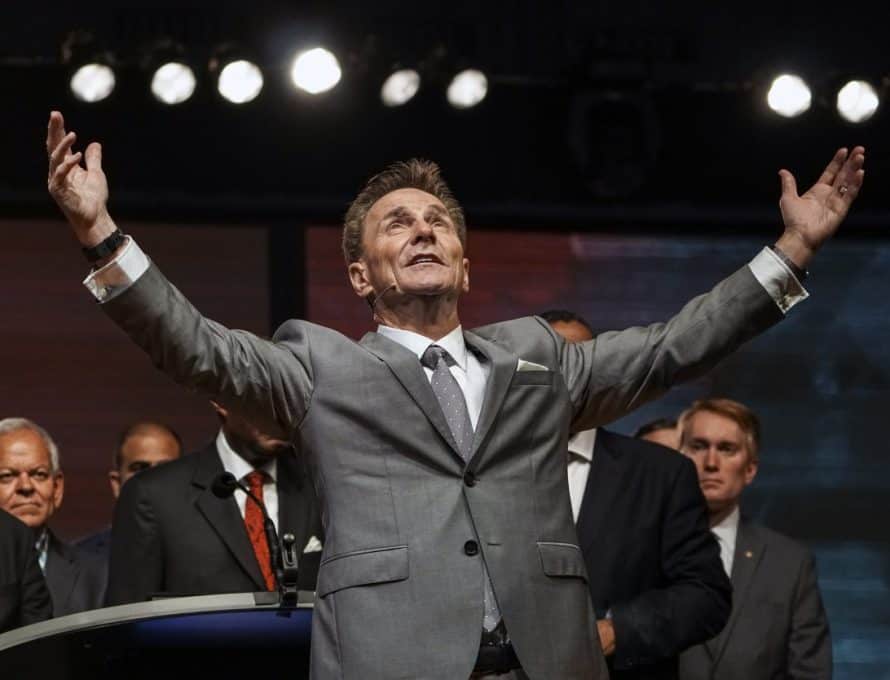 ST. LOUIS (BP) – At times they raised their hands. At times they gathered together in groups of two to three. And at times thousands of messengers to the Southern Baptist Convention knelt at their chairs on Tuesday night (June 14) as they pleaded with God to bring national revival and spiritual awakening to America.

In one of his final acts as SBC president, Ronnie Floyd led the convention in an evening of prayer during its annual meeting in St. Louis.

“From this moment on, it will not be about personalities on the stage. It will be about Jesus, all the way,” said Floyd, who has focused much of his two-year presidency on urging Southern Baptists to pray for spiritual awakening. “We’re about to give Him praise. And from this moment on, I’m going to ask you to give Him your all. What if this were your last night on this earth? Wouldn’t you want to give it all to Jesus and be ready?”

Floyd noted that Southern Baptists had thousands at First Baptist Church of Orlando who were, at that time, praying desperately for their city.

“Orlando is a lot more desperate tonight than they were before this tragedy,” Floyd said. “But why should it take a tragedy to make us desperate for God?”

At the end of the service, Floyd encouraged every Southern Baptist church to dedicate at least 11 minutes — but preferably the entire service — to pray for America on Sunday, Sept. 11, the 15th anniversary of the 9/11 attacks. He asked that churches pray for the upcoming election and ask God to bring revival to the country.