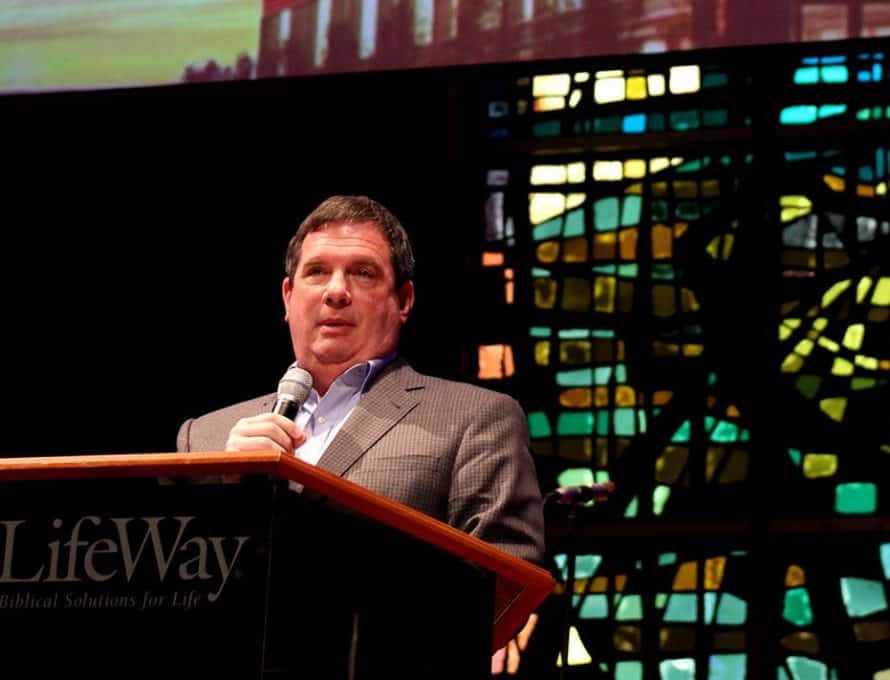 NASHVILLE – LifeWay president and CEO, Thom S. Rainer, leads employees in a chapel service celebrating the ministry’s 125-year history prior to a groundbreaking and prayer service for the ministry’s new building. BP Photo.

NASHVILLE (BP) – LifeWay Christian Resources appeared to leave little doubt of its aggressive timetable Wednesday (April 6) for construction of its new building, breaking ground for new headquarters just hours after closing the purchase of the property.

On Wednesday, the future site of the nine-story, 250,000-square-foot building was primarily dirt and gravel, with front-end loaders waiting idly beside a huge white tent. Hundreds of employees gathered for a brief ceremony to pray and dedicate the new location.

“There’s really a singular purpose to this – to celebrate through prayer,” LifeWay President and CEO Thom S. Rainer told the assembled employees.

Describing the future of the new property, Rainer said, “It’s going to be amazing to see what will happen. Lives will be changed and people will come to a saving knowledge of Jesus Christ. The only thing we can do in response is say, ‘God, to You be the glory,’ and pray that every day we will be used by Him.”

Frank S. Page, president of the Southern Baptist Convention’s Executive Committee, expressed thanksgiving for LifeWay’s legacy of commitment and quality. “We are proud to be partners with this organization,” he said.

Several LifeWay employees then led in prayer for the project’s builders and architects, for employees and the surrounding community, and for churches across the nation and around the globe.

The groundbreaking ceremony coincided with a celebration of the 125th anniversary of LifeWay, established in 1891 as the Baptist Sunday School Board. Its downtown Nashville campus eventually expanded to 14.5 acres, more than the ministry needs today.

In November 2015, LifeWay sold the property to San Diego-based Southwest Value Partners, a private real estate investment firm. The new owner plans to redevelop the site, but LifeWay will continue to occupy part of the property until its new building is complete.

In a chapel service for employees before the groundbreaking, Rainer outlined LifeWay’s 125-year history through the accomplishments of its eight previous presidents, from entrepreneurial founder J.M. Frost, “one of my heroes of the faith,” to Rainer’s immediate predecessor, James Draper.

Rainer noted a worldwide shift toward digital technology since his own tenure began in 2006. Preparing to move to a new location during these years “has been a God-infused effort,” he said.

“Remember this place fondly – remember how God has worked in this place – but remember that the God of the Old and the New Testament is not limited to a place,” Rainer told employees. “As we move to Capitol View, the God who has been with us for 125 years will be with us in the future.”

Employees then boarded shuttles to the new location, where Rainer and his executive leadership team tossed dirt into the air with ceremonial shovels.

Construction of the new building is expected to begin almost immediately.