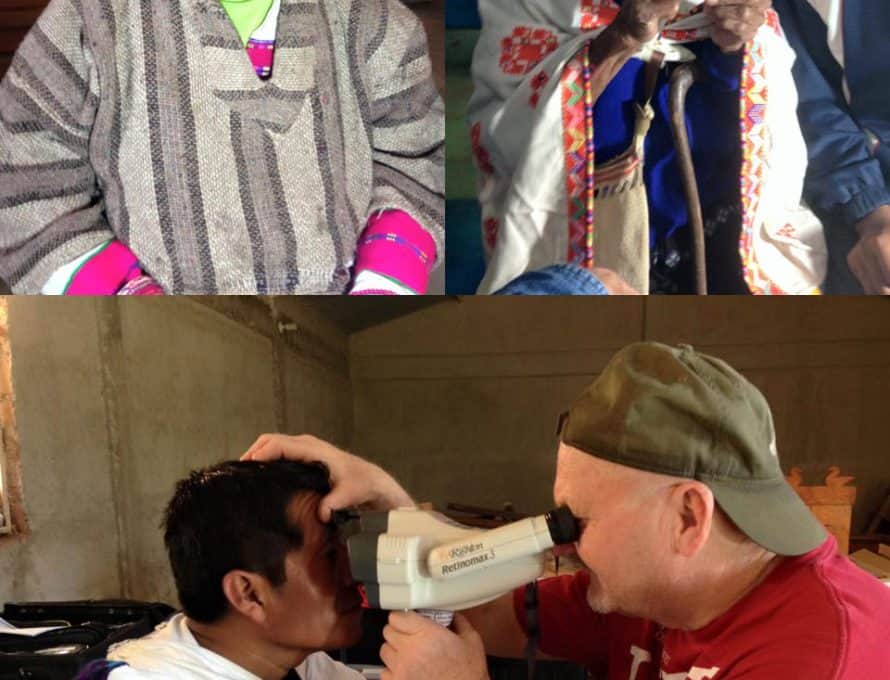 CHIAPAS, Mexico – (top left) Domingo Lopez, a 98-year-old man, received a pair of glasses and heard the gospel at a clinic manned by Concord Baptist Church, Jefferson City. (Top right) At 105 years old, Catarina Gomez was thrilled to be able to see clearly so she could thread a needle. (Bottom) Dan Jordan of Concord Baptist Church, Jefferson City, tests a man’s eyes using a portable autorefractor.

CHIAPAS, Mexico – At 98 years old, Domingo Lopez had never laid eyes on a foreigner. But, thanks to Concord Baptist Church in Jefferson City, when he finally did meet them at one of four eyeglasses clinics in the southern state of Chiapas, he could see them clearly.

Lopez was one of hundreds ministered to through an eyeglasses clinic put on by Concord, the latest of 19 such mission trips over the past six years that began when Larry Merry was part of a medical missions trip and realized he didn’t see anyone wearing glasses.

“I figured their eyesight couldn’t be that much better than ours,” he said.

Once home, Merry felt God leading him to pursue the task, so he connected with First Baptist, Arnold, which had a thriving eyeglasses ministry. A retired engineer, Merry has since become a sort of amateur expert in optometry and manages an inventory of more than 10,000 usable pairs of glasses at home, including two inventories of 18,000 pairs that remain in Mexico.

The glasses Concord’s clinics give away usually start from donations to Lions Club chapters across Missouri, which end up at an organization called Saving Sight in Columbia. From there, they are available to mission organizations, and many make their way to Merry’s basement.

It’s usually a raw, tangled box of glasses. First, Merry cleans them (the best method, he has discovered, is to run them through the dishwasher). Some are broken, many are scratched, and many are too heavy to transport in bulk, so volunteers at Concord sort through and discard any glasses that don’t pass muster.

From there, volunteers measure the lens prescription using a lens meter set up in Merry’s basement. Roughly once a week they measure, label, then catalog the spectacles.

The information for each set of glasses goes into a computer inventory so that when teams get to the field and test a person’s eyes using a portable autorefractor, they can match a pair of glasses to a person’s needs. There’s no choice of size or style, but Merry said people – from toddlers to centenarians –  do not seem to care. Their smiles when they put the glasses on confirm that.

One such woman was Catarina Gomez. At 105 years old, she walked to the clinic by herself to get her first pair of glasses. She is a farmer and still works in the fields tending her corn and coffee and picking the product in season. She wanted glasses so she could see better for sewing.

“We got her a needle and thread and made sure she could thread the needle,”Merry said. “She was a delight and had quite a personality.”

Another was Lopez, who walked 20 minutes to be at one of the four clinics.

“He wanted to see better so he could do some of the things he used to do again, Merry said. “He had one other pair of glasses which he had bought at a store. Unfortunately they broke a long time ago – he said ‘the leg fell off’ – and he has had to do without. He left very happy with his second pair of glasses.”

The ministry focuses on poorer, rural areas of Mexico. The government says that more than 70 percent of the people in these areas live in poverty, and the four remote villages Concord visited on their last trip spoke two different indigenous languages – not Spanish.

“The Spanish never conquered this part of Mexico, and when you see the terrain you understand why,” Merry said.

But regardless of the language spoken or the prescription of the lenses, the true purpose of the trip is the gospel.

“The glasses are just a hook and a draw to get people to come,” Merry said. “The real reason we’re there is to share the gospel. Once we minister to their physical need we get to minister to their spiritual need.”

The Concord teams partner with local churches that host the clinics and can follow up on any decisions made for Christ.

“When we went on the first trip in 2010, I had no idea what it would grow into,” Merry said. “I just felt God call us to do it. I had a little talk with Him – or He had a little talk with me and I said ‘I’m an engineer. I know nothing about glasses; the only thing I know is how to put them on my face. I’m just going to have to leave the results up to You.’ He has blessed the ministry tremendously.”

In those 20 trips, 27,900 have come through the eyeglasses clinics, receiving more than 21,000 pairs of glasses. The local churches report that nearly 5,000 of those people have accepted Christ.

Just like Concord’s ministry was jump started by a ministry of First Baptist, Arnold, Merry is willing and eager to help other churches reproduce the eyeglasses clinic model of ministry.

“We’d love to get more churches involved or even one or two people to join us on one of our teams.”