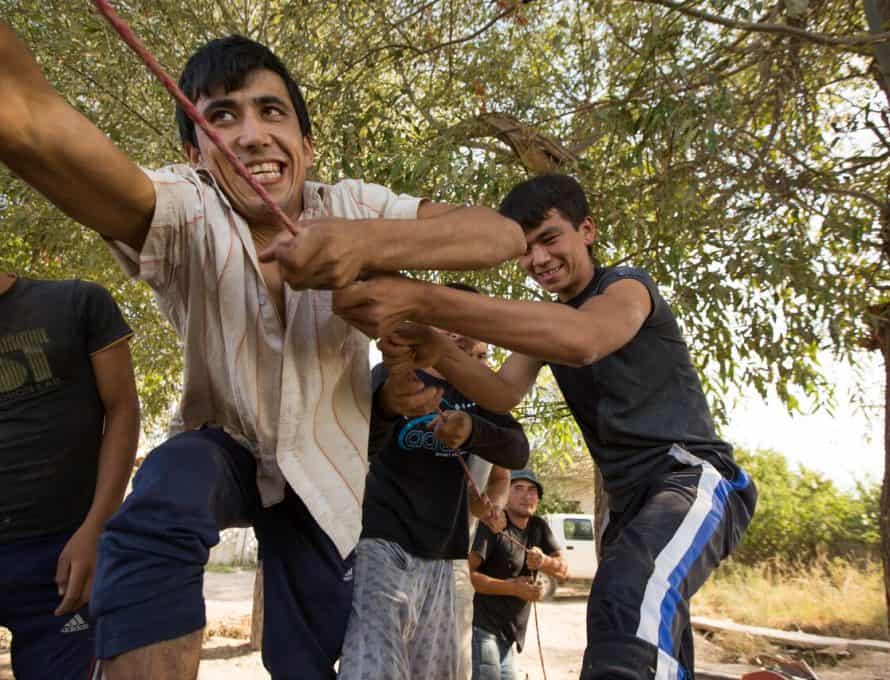 CENTRAL ASIA – Youth in Central Asia tug one of their peers from a well where he has been digging to provide a village with fresh water, harkening to the Living Water that is communicated in each project. BP Photo.

CENTRAL ASIA (BP) – Christian aid worker Gary Warrior* was sitting on the floor in a Central Asian village with a congregation of about 20 people several years ago, getting ready to share about “the cost of discipleship.”

Someone made the suggestion to go around the room and share their testimonies. One woman simply said, “Oh, I’m just very blessed and I’m so thankful to be here.”

Her friend elbowed her: “Explain to him your testimony, tell him what’s happening in your life with God.” But the woman again said she was “blessed” and just thankful to sing songs and read the Bible together.

“You tell him the truth,” her friend retorted. “You tell him that every night after you go to these meetings, your husband beats you, and last week he beat you with a hammer!”

Tears jumped to Warrior’s eyes as he thought, How can I tell these people to go out there and suffer for Christ’s sake?

“God just grabbed me by the collar and He said, ‘You’re not asking them, I am.’”

This former Soviet republic was suffering, broken and poor after a five-year civil war when Gary arrived in 1997 with his wife Ann* and four children, two of whom are now adults.

Though the Soviets tried to stamp out religion, the country did not lose its strong Muslim identity. But many of these Central Asians feel hopeless and overlooked by the world.

“[To] show up here now, in this point in history, and begin to tell them that God loves them — this is water on dry ground,” Warrior says.

Despite the people’s thirst for truth and love, Christians are persecuted. Not necessarily from the communist government — Warrior estimates about 30 government-registered churches and 1,000 believers in the country – but from society. Leaving Islam brings great shame on a person’s family.

“Persecution comes every time the Gospel is proclaimed here,” Warrior says, “but if we’re able to do it in the context of families and in communities, we can minimize the effects of that persecution so that people can stand together for the cause of Christ and not be chased out.”

Warrior wasn’t planning to focus on human needs work, having earned a music degree and an M.Div. from Southwestern Baptist Theological Seminary. But after seeing that even numerous aid agencies couldn’t respond to the great number of disasters and people suffering in Central Asia, Warrior started a disaster response team of Christian workers and national believers in 1998.

He discovered that disaster response “gave us real access to share the Gospel” by being with people in crisis. The next year in that village, Warrior’s team planted their first church and baptized 13 people.

To extend the Gospel’s reach, Warrior’s team dubs Christian movies into local languages and gives them to people they encounter. They have dubbed 12 films – including “The Gospel of John,” “Esther” and “Courageous” – and created worship songs for their Central Asian context.

“This is the Gospel presented in the local language in a way that I can’t speak it,” Warrior says. “It’s visually powerful.”

After Warrior’s team responded to disasters for 10 years, the country’s government became better able to respond, which left him wondering, “What next?”

The team visited a Christian friend, Murod*, during one of their last disaster responses. He craved Christian fellowship since he had not seen another believer for two and a half years.

The team wanted to support Murod’s witness, and they learned that the village desperately needed clean water. People were constantly sick with diseases like typhoid, hepatitis A and giardia from drinking dirty water in polluted irrigation canals and streams – the only water sources to which many have access.

One villager told Warrior that his wife was discouraged, having given birth to three babies in the past three years who had died. “If we can get them clean drinking water,” Warrior says, “we can change everything for them.”

With the help and training of a relief organization, Warrior’s team of Christian workers and national believers transitioned to digging wells in 2009. It has been satisfying to “have the opportunity to make the connection between clean drinking water and the Water of Life,” he says.

Putting a well in Murod’s village was difficult – they had to dig 30 holes to find water – but today, there are nine wells. All that time spent digging provided many witnessing opportunities in the village.

Now, a small church meets at Murod’s house. Warrior’s team is encouraged by the continual strength and joy of Murod and his wife Muhabbat,* despite the persecution and ridicule they receive from their village.