As someone who has worked in the newsrooms of three significant daily newspapers, I can testify to the lostness that exists. The lostness often surfaces as hostility and ridicule – especially toward Christianity. In recent days Christians have witnessed a pair of incidents that were contemptuous, even cruel.

The first involved former football star and television sports analyst Tim Tebow, the son of Southern Baptist missionaries who attends First Baptist Church, Jacksonville, Fla. Tebow is well known for his commitment to Christ. Earlier this month it was widely reported that Tebow was dating Olivia Culpo, the former Miss USA 2012. A story surfaced that Culpo dumped Tebow because she did not want to abstain from sex with Tebow, a virgin.

The liberal New York Daily News hyped the story, causing it to spread throughout the nation’s news media. “He was really into her. He was sending her love letters and cute notes and professing his love for her,” a source told the newspaper. “She had to break up with him because she just couldn’t handle it. He still hits her up, but she just can’t deal with the sex thing,” the source said. 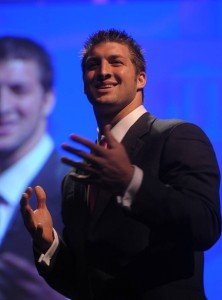 One problem: It was not true, as the digital pop culture publication, TMZ, uncovered. They didn’t even date. But the damage had been done as the fraudulent story spread far and wide for several days. Tebow was ridiculed because he is abstaining from sex until he marries. Of course the media got away with the smear even though some offered obscure apologies and corrections.

The second incident also involved the New York Daily News following the massacre in San Bernardino, Calif., in which two terrorists entered a state office building and opened fire at a Christmas party, killing 14 and wounding 17. The Daily News reacted by running a large front page headline blaring: “God isn’t fixing this,” with a subhead saying, “As latest batch of innocent Americans are left lying in pools of blood, cowards who could truly end gun scourge continue to hide behind meaningless platitudes.” It was accompanied by pictures of four Republican leaders calling for the nation to pray for the families of the shooting victims.

Southern Baptist leaders rightly criticized the headline as disparaging and exploitative. After all, the headline suggested that prayers are unanswered and that perhaps, if there is a God, He does not care. It was a pathetic attempt to scoff at those who encouraged Americans to pray for the victims. That would have been bad enough, but the newspaper was dishonestly biased in attempting to portray Democrats as wanting to do something (take away our right to bear firearms), while Republicans wasted time offering meaningless prayers. God was clearly mocked by the Daily News and its message clear: Those who believe in prayer are to be held up for shame, if not hatred.

Not only does truth exist, but we can know it absolutely…. Let us pray media – like the @nydailynews – come to their senses and realize the same. – Don Hinkle

No wonder the percentage of Americans who have a “great deal” or a “fair amount” of trust in the news media has plummeted from approximately 70 percent in the 1970s to about 40 percent today. Researchers tell us there are a variety of reasons for the decline. One is the public’s distrust of the media when it comes to telling the truth. A 2012 Gallup poll revealed 60 percent of Americans have little or no trust in the news media, the highest percentage since Gallup started asking the question in the 1990s. A 2011 Pew Research Center poll found that only 25 percent of Americans think news organizations get the facts right, the lowest percentage in 30 years.

This is what happens when Christ is rejected and moral relativism is allowed to creep into journalism. Truth is in the eye of the beholder and lying is not a problem if it advances your agenda, or so it goes for media like the Daily News. Of course our rejection of such faulty belief is what sets Christian journalism apart. We know truth exists. Our Lord told us in John 8:32, “You will know the truth.” Not only does truth exist, but we can know it absolutely. Let us pray media – like the Daily News – come to their senses and realize the same.