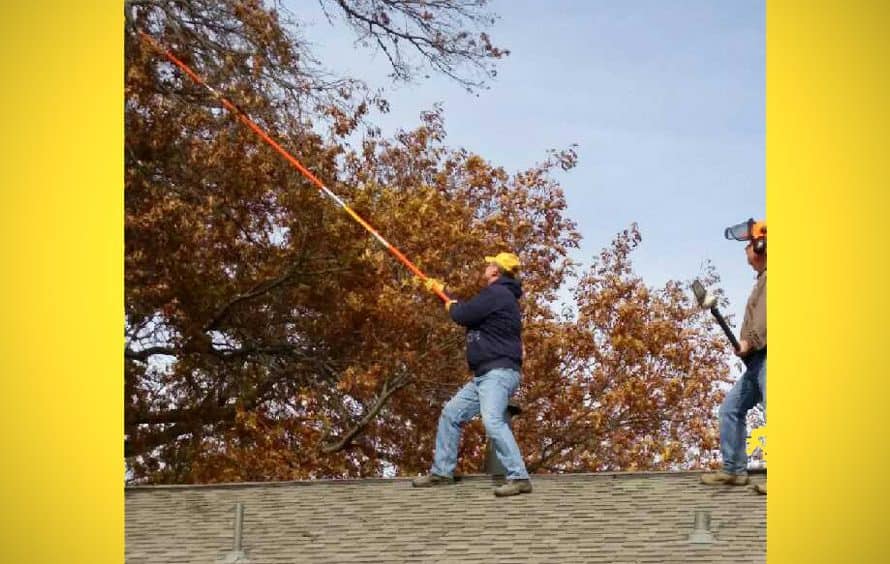 YUKON, Okla. – Three inches of ice and downed trees and powerlines are a pain for everyone, but for David and Natasha, it was insult to injury.

“We were finishing up a job and a guy pulled up and wanted to know if we were a tree service,” said Danny Middleton, one of eight Disaster Relief volunteers from Missouri to respond to Thanksgiving ice storms in central Oklahoma. “I said, ‘No, but we’re from Southern Baptists in Missouri and we do clean up after tornadoes, hurricanes and ice storms.’”

The team followed the gentleman – David – to his home a half-mile down the road where he asked them for a bid to remove trees that had fallen.

“He took us around to the backyard and showed us this huge tree on the ground and asked what we would charge,” Middleton, a member of Bevier Baptist Church, said. “I told him ‘It’s not going to cost you anything. Well, I take that back. It will cost you letting us give you a Bible we all sign and letting us pray with you.’ I don’t think he believed us, but he let us get to work.”

While they worked, the team listened to David’s story. His wife, Natasha, had a miscarriage a few months before. The day before the DR crew showed up, they were pacing the yard in the middle of the night wondering how they were going to afford to remove the downed trees when they couldn’t even afford their own car. Then at 3 a.m. that morning, Natasha needed emergency surgery while David wrangled a two-year-old and four-year-old girl.

Just under 90 minutes afer the DR crew started, the job was done. Middleton said a commercial tree service would have charged between $1,200 and $1,500 for the job. Other homeowners the Missouri team has worked with in Yukon said bids have ranged from $2,000 to $5,000.

They gave David a Bible – and previous conversations had shown them he was a Christian – and prayed with him for his family.

“He said, ‘I pray every day, but I never expected my prayers to be answered like this. This is a miracle,’” Middleton said.

The Missouri crew is staying at First Baptist Church, Yukon, camping out with 80-90 other DR volunteers, mostly from Oklahoma. Middleton said his crew has averaged clearing debris from nine homes each day.

Two more recovery teams from Missouri left for Oklahoma Dec. 6, and another two are scheduled to leave Dec. 13.