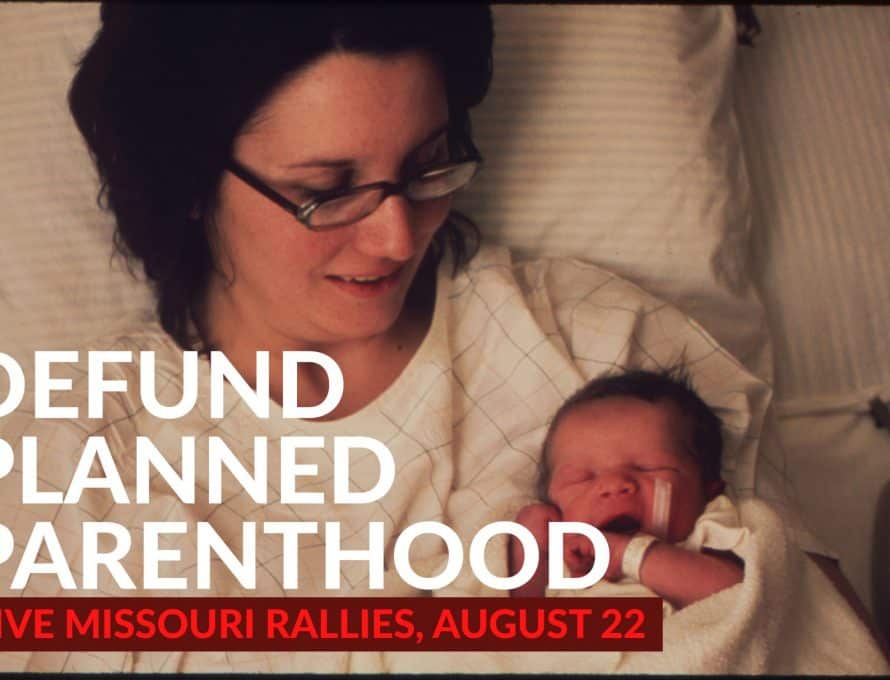 In five locations across Missouri – and more than 300 locations nationally – rallies were held simultaneously on Aug. 22 to protest and raise awareness of abortion and the sale of aborted baby body parts.

We have all been shocked and angered over Planned Parenthood selling body parts of aborted babies, thanks to the videos by the Center for Medical Progress. We ought to be outraged that our tax dollars – more than $500 million worth – are funding Planned Parenthood’s barbaric activity.

The First Amendment to the U.S. Constitution guarantees that every American can assemble peacefully to protest government actions. If there were ever a reason to protest, surely it is the taxpayer funding of Planned Parenthood. So it was a privilege for me to exercise that right Aug. 22 after I was invited by several pro-life groups to speak at the Defund Planned Parenthood rally in front of the Planned Parenthood facility in Columbia. About 250 people attended. Following are my remarks, directed at our state and federal government leaders.

Thank you for the privilege of joining you today in exercising our First Amendment rights to protest an evil injustice being perpetrated against unborn Americans.

To all of you here today and millions of other pro-life Americans, I want to say thank you for your dedication in protecting the most vulnerable among us. Let me encourage you to continue your protests and speak boldly – and loudly if necessary – in this sacred effort to bring the slaughter of these children to an end. Southern Baptists throughout our nation stand with you and be assured of our unceasing prayers for your efforts and that the killing will end.

My remarks today, since this is a protest, are directed toward our state and federal governments. To all pro-life lawmakers, I say thank you and I urge you to stand strong. Your cause is noble and just. Be assured of our on-going prayers for God to grant you strength and wisdom.

To those lawmakers with whom we disagree on this critical matter, I would remind you that the only government that exists is that ordained by God. You are called by God to be a minister, not as a preacher in a local church, but as an official of this state. However, in your office, you are not given autonomous authority. Your authority, and the only authority that you have whatsoever, is an authority delegated to you by the One who possesses all authority, and that is God.

I challenge you this day to always remember that you are accountable to God for how you exercise your office and may you not be seduced by the mythological concept of separation of church and state. The state – as much as the church – is instituted by God, ordained by God, and derives whatever authority it has through delegation of divine authority.

I am here today as a follower of the Lord Jesus Christ, and it is the church that is called to be a critic of the state when the state fails to obey its mandate under God. So when we, as the church, are critical of the state with respect to the idea of abortion, people on the other side accuse us of trying to impose the church’s agenda on the state.

Our Founding Fathers affirmed this. It is not coincidence that when they promised every American “life, liberty and the pursuit of happiness” that life is the first one mentioned. You cannot have liberty and you cannot pursue happiness if you first do not have life.

When governments engage in genocide – and make no mistake that history will record abortions in America as genocide – such a government becomes a servant to Satan because human life is being destroyed for no just cause.

I repeat, we are protesting against an injustice and are not trying to intrude into the domain of the state. We are here today to remind the government that its primary function is to protect life and any government that sanctions the destruction of life has failed in its divine mandate to govern.

Therefore, we ask the government yet again to put an end to this senseless slaughter and at minimum defund Planned Parenthood and redirect our tax dollars to health care facilities that value and protect life. It is time to put Planned Parenthood out of business.