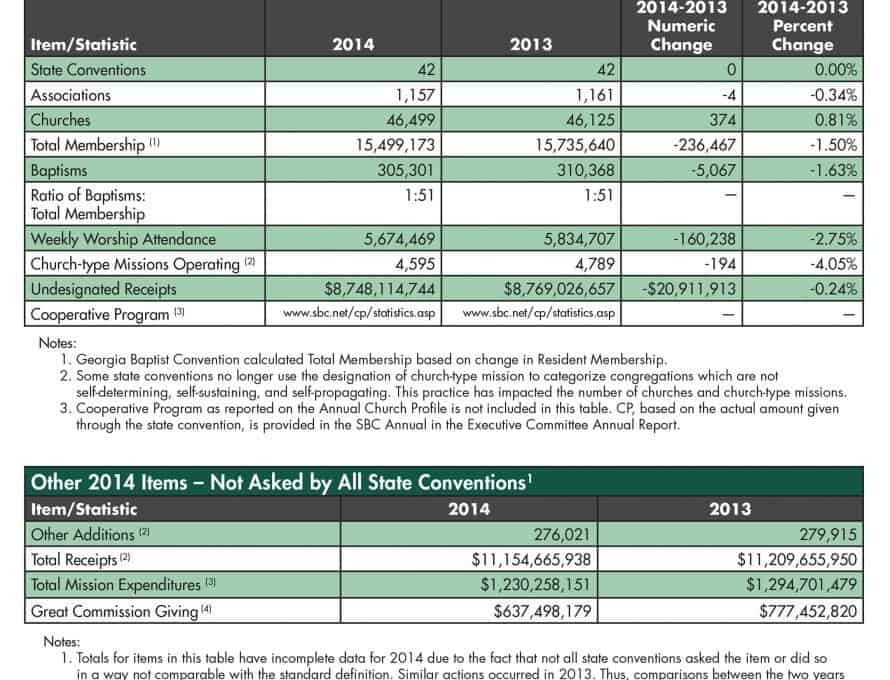 The number of cooperating churches within the Southern Baptist Convention rose for the 15th consecutive year, but the churches lost more than 200,000 members, the biggest one-year decline since 1881, according to the Annual Church Profile (ACP) compiled by LifeWay in cooperation with Baptist state conventions. Average attendance, baptisms and giving also declined.

The ACP is an annual statistical report churches voluntarily provide to their local Baptist associational organizations or their state conventions, which relay the data to LifeWay. 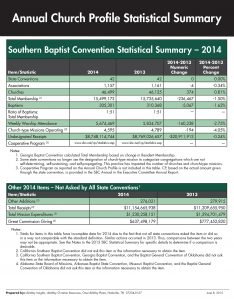 One of the biggest declines last year was Southern Baptist church membership, which fell 1.5 percent to 15.5 million — still the largest Protestant denomination by far, but at the lowest level since 1993. Weekly worship attendance declined 2.75 percent to 5.67 million Sunday worshippers.

Baptisms declined for the third year in a row, although the rate held steady with one baptism for every 51 members. Churches recorded 5,067 fewer baptisms, a decrease of 1.63 percent to 305,301. Reported baptisms have fallen eight of the last 10 years, with last year’s the lowest total since 1947.

The declining picture painted by the ACP data comes at a pivotal time in Southern Baptist life as the convention prepares for its June 16-17 annual meeting in Columbus, Ohio.

“It breaks my heart that the trend of our denomination is mostly one of decline,” said Thom S. Rainer, president of LifeWay. “This new data confirms SBC President Ronnie Floyd’s call for next week’s convention to focus on prayer for a great awakening. Programs and meetings are not going to revive our people — only prayer and repentance will lead our people to revival.”

Frank S. Page, president of the SBC Executive Committee, said he is saddened to hear the recent statistics, though not surprised.

“This is the lowest baptisms that we have seen since we crossed the 300,000 mark in the late 1940s,” Page said. “While we might complain about the many churches who are not reporting their baptisms, and we can, the reality is that we are simply not sharing our faith like once we did.

“In this year’s Southern Baptist Convention, I will be making a call for Southern Baptists to be involved in evangelism and stewardship like never before,” Page said. “The truth is, we have less people in our churches who are giving less money because we are winning less people to Christ, and we are not training them in the spiritual disciplines of our Lord.

“May God help us to be as serious about sharing our faith and discipleship as were the first-century Christians,” Page said. “God forgive us, please, and draw us back to a place of passion for winning souls to You!”

Total missions expenditures decreased 4.98 percent to $1.2 billion, but the report shows three Baptist state conventions did not report this data — California, Georgia, and Oklahoma. While Great Commission Giving, which reports total denominational giving, increased in 2013, it was down 18 percent in 2014 to $637 million, with four state conventions — Alabama, Arkansas, Missouri and Oklahoma — not asking churches for that data.

Giving through Southern Baptists’ Cooperative Program (CP) mission initiative is not included in the ACP annual report. Instead, totals are reported by the SBC Executive Committee, which facilitates the mission gifts to the SBC’s national and international missions and ministries.

CP gifts forwarded from state conventions to SBC causes in fiscal year 2014 were 0.76 percent below the previous year. However, year-to-date contributions for 2015 are 2.09 percent ahead of the same period the year before and 2.57 percent above the year-to-date budget projections.

Statistics for the national ACP are reported by individual churches to their local association and/or state convention, and national totals are compiled and released when all cooperating state conventions have reported.