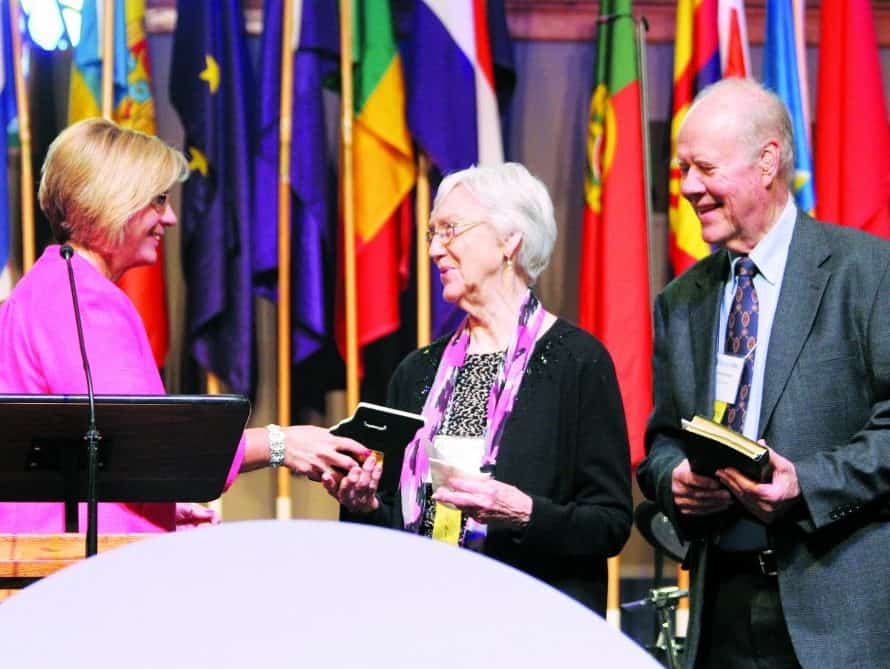 ST. CHARLES – Emmett and a Nell Barnes being recognized as the 2015-2016 Emeritus Missionaries of the Year by the MWMU. They served in Lebanon and Morocco. Pathway photos by Vicki Stamps.

ST. CHARLES – A challenge set the stage for the 2015 WMU Missions Celebration and Annual Meeting held at First Baptist Church here, April 10-11. Cherri Crump, Missouri WMU president, issued the challenge in her welcome to the 360 plus participants.

“We want to challenge you to go deeper,” she said, “deeper into your commitment and into your faith.”

The theme for the 91st Annual Meeting was designed to accomplish that goal: “All for You: Surrender, Sacrifice, Serve.”

Wanda Lee, National WMU executive director/treasurer, provided the theme interpretation throughout the conference. “All is more than a three-letter word,” she said. “It is packed with meaning. It is used 5,675 times in Scripture. When it refers to God, it describes His omnipotence and His total sufficiency.”

“The charge to us,” she continued, “is to allow Him to be in charge of all in our lives and relationships. But, Jesus was always the teacher and in our focus passage of Mark 8:34, He wants us to understand the cost to be what God wants us to be.”

Lee used the ministries of several pioneer missionaries during her sessions to illustrate the cost and the accompanying blessing.

“Wana Ann Fort and her husband, Milton Giles, were both doctors,” Lee said. “They wanted to connect healing with the love of Jesus. So they were early medical missionaries to Southern Rhodesia (now Zimbabwe). They supervised the building of Sanyati Baptist Hospital. Wana Ann boldly proclaimed Jesus, despite long, tiring days at the hospital and raising five boys on the mission field without modern comforts.”

In another session, Lee highlighted the experience of the Elliot family in Central America.

“Jim Elliot and other missionaries were killed as they tried to reach the Huaorani tribe of Ecuador with the news of Jesus,” she said. “The day before Elliot was killed by the tribe, he wrote in his journal, ‘He is no fool who gives up what he cannot keep, to gain what he cannot lose.’ His wife, Elizabeth, embraced his dream of sharing the gospel with the tribe. She went back to minister to the tribe, and they accepted Jesus because they saw the love and forgiveness in her.

“The depth of forgiveness strikes a chord in me,” Lee continued. “To allow Him to usher in that much forgiveness provides the opportunity to know Jesus better. To know Him begins with the giving of self.”

Modern missionaries shared stories about their lives in other countries. One young, beautiful missionary known to the participants only by her initials talked about her life in living in a country dominated by Muslims.

“One of my favorite things is sitting with the children with goats all around watching lives change with the gospel,” she said.

Citing I Thessalonians 2:8, she continued, “I live among people and share life with them and share the Truth with them of the One who loves them.”

Don and Diane Combs, IMB personnel among European peoples, told of the work at the Socchi Olympics.

“When the Olympic flame was lit,” he said, “barriers of the Russian people came down. We had so many opportunities to share Jesus, and we were able to follow up. We watched God work in so many amazing and powerful ways.”

Also, during the conference, Emmett and LaNell Barnes were recognized as the 2015-2016 Emeritus Missionaries of the Year for their life mission work in Lebanon.

Sixty-three participants put their faith in action by packing 233 large white buckets with needed items for AIDS patients. Several salvation dolls were made to be tools for pastors and missionaries, and $1,875 was raised through the silent auction of the baskets for the Alberta Gilpin Fund.

Lee summed up the conference theme.

“Jesus set the example for service,” she said. “He was sensitive to the hungry. He did more than heal leprosy; He touched them. He shattered the customs by serving women, meeting with children and washing the feet of the disciples. He gave us gifts and abilities for service to administer God’s grace.”