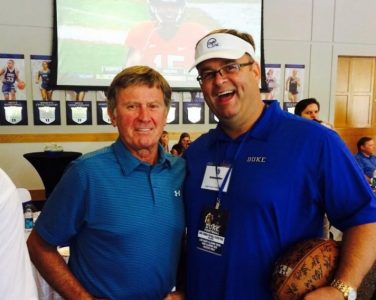 HANNIBAL (Christian Examiner) – Anthony Allen, president of Hannibal-LaGrange University, said he is encouraged his alma mater, Duke University, has had an apparent change of heart about broadcasting the Muslim call to prayer each Friday from the university’s chapel tower. Stiil, he laments the school’s apparent lack of understanding about the heart of the controversy.

“I’m happy for some measure of victory,” Allen told Christian Examiner. “I hope they learned that we can’t deny the conflict between two worldviews – and not all truth can be truth.”

Earlier in the day, Allen, a defensive tackle for Duke’s football team from 1986-1990, and now president of Hannibal LaGrange University was one of a chorus that harshly criticized what he called a “naive” move.

Beginning Friday, January 16, the Duke Muslim’s Association was set to begin chanting the prayer call from the Duke Chapel bell tower, signaling the beginning of the weekly prayer service. The three-minute “adhan,” according to a school publication, was to be “moderately amplified.”

Allen, president of the Fellowship of Christian Athletes at the school from 1987-2000, said in an interview before Duke’s about-face that his former school’s desire to become inclusive had led them to “lose their total mind.”

“They bow at every altar that comes before them and have taken on a view that truth is pretty much relative,” Allen said.

Particularly disturbing and disappointing, Allen said, is the school’s departure from its historic roots — given what he has learned about Islam.

“Anybody who has read the Koran knows it is a religion of hate and violence and this is quite disturbing,” he said. “I’m deeply disappointed at this display of ignorance. This is a serious intellectual mistake – to display Islam as a peaceful religion.

“I think they’ve checked their brain at the door,” Allen said.

Allen added that all people have a right to worship as they wish, but that there is a sense of “hypocritical inequality” in America with schools and other institutions that have banned “Christian” prayer, but apparently embrace accommodations for others, particularly Islam.

“It shows how naive people are about the teaching and tenets of Islam – read the Koran,” he re-stated.

At Hannibal LaGrange, with nearly 1,200 students from 28 countries and 26 states, Allen says the school invites students from all faith traditions. “Our position is that we are a Christian institution and we teach in accordance to the Word of God.”

At Duke, Allen said there is a “clash of worldviews” the university needs to recognize in their pursuit for “religious tolerance” — which to them, he said, seems to mean “all religions lead to one God.”

“Allah is not the same God as Jehovah God,” Allen said.

With about 700 Muslims among its nearly 15,000 students (4.7 percent), the Methodist-affiliated university in 2009 created the Center for Muslim Life and hired its first full-time Muslim chaplain.

Later in the day, an announcement was made that the prayer call will take place in a quad outside the chapel, rather than from the chapel tower.

“Duke remains committed to fostering an inclusive, tolerant and welcoming campus for all of its students,” Michael Schoenfeld, Duke’s vice president for public affairs and government relations, said in a statement. “However, it was clear that what was conceived as an effort to unify was not having the intended effect.”

After Duke’s change of plans, Allen mused that he remembers having some professors at Duke that he called “true liberals.”

“The truth didn’t matter to them. It was live and let live,” Allen said. But he said that they at least tolerated conservatives. “I really get upset when people have no room for evangelicals.”

Joni B. Hannigan is the Houston-based senior editor for Christian Examiner at ChristianExaminer.com This story is used by permission and available online at http://www.christianexaminer.com/article/duke.alum.university.president.has.harsh.words.for.his.alma.mater/48103.htm.