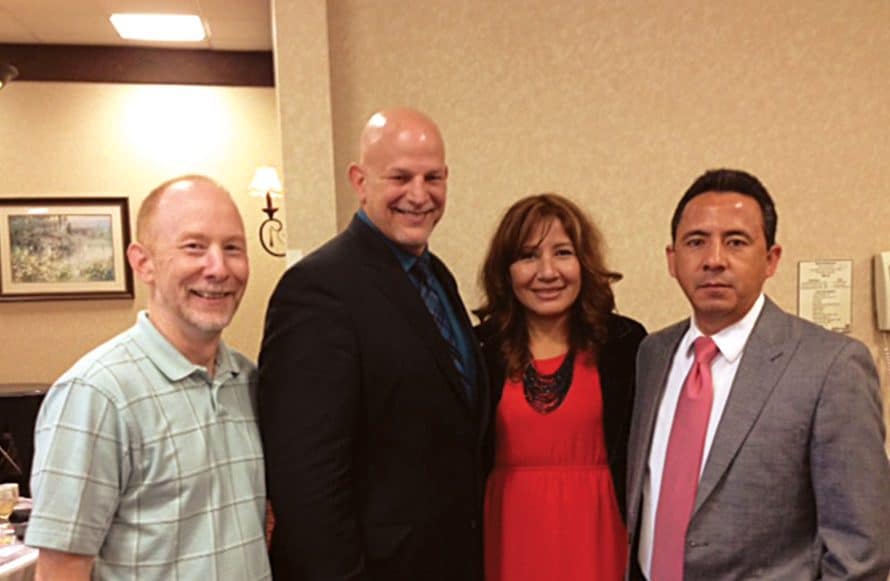 Sergio Rebollar Oropeza, the president of the Puebla/Tlaxcala Regional Baptist Convention of Mexico, spoke of the gratitude that the churches in his region of southern Mexico feel for the partnership that Missouri Baptists have had with them during the past three years. He said, “I am sure the Lord is asking you the question, ‘Who will go and who will respond?’ and I am urging you to say, ‘Here am I, send me.”

Oropeza said his greatest joy is seeing new churches started in the convention. There have been 12 new church starts begun in the past three years with MBC assistance. Most of them are in rural areas, he said.

“The needs are great,” he said. “The economy is very bad in rural areas and there is extreme poverty.” Additionally, many people there struggle with alcoholism and divorce.

The Pathway asked him if the Catholic Church holds considerable influence over the people there. Oropeza responded, “Yes. If asked, the priest will say, ‘Don’t listen to those people and don’t receive them.’” He said the priest will say, “Those people lie.” But despite opposition, he said many people have opened their hearts when they hear what they have been rejecting.”

His wife, Liz, has accompanied him to the last three Missouri Baptist Convention annual meetings, and they said they have felt a lot of love from the people in Missouri.

Pastor John Jones of Cadet (Missouri) Baptist Church spoke of their mission trip experiences there and said that, when Pastor Oropeza visits in the churches in his region, he is often asked, “Where are the Americans who are going to come to us?” He urged MBC pastors and leaders to begin making plans to go to Puebla/Tlaxcala in the near future.

Rick Hedger, MBC Partnership Missions Team Leader also said he will do all he can to assist and orient Missourians who would like to go to Mexico for missions partnership trips.

The MBC also has an established partnership with the Hudson Baptist Association in upstate New York.

Church planter, Sean Pierce represented that association as he told of the lostness of the 14 county region of New York and western Massachusetts. He is a native of New England and New York and is the son of a Southern Baptist church planting pioneer in the region.

He said that within a 350 mile radius of Schenectady, where he is based, 25 percent of the U.S. population lives. That area of the country holds the distinction of having the least percent of the population who believe in Jesus.

“But God is stirring. He is doing some things,” Pierce said. “It is really a secular culture. We are so post-Christian that we are really pre-Christian,” he added.

He described a community named Monticello, NY. “It is the home of many Hebrew Hassidics.” The Jewish presense is very strong in the community, he said. “A church planter, named Seth Switzer moved there from Montreal, Quebec, to plant a church. They participate in a local bagel festival as an outreach.” He encouraged MBC participants to go to New York and help out with a bagel festival and share the gospel.

Pierce had many other stories and welcomes people to contact him at the association, which has a website (www.hbany.net), or at 518.355.4964.

Hedger said there are also partnership missions opportunities in Iowa and other states of the upper Midwest along the I-29 corridor, which Missouri Baptists are endeavoring to reach through the Heartland Interstate Strategy (HIS) by planting churches along I-29 from Kansas City to Winnipeg, Manitoba.

One recent HIS mission trip participant, Pastor Jack Slade of Lamar, told The Pathway that they went there to assist Cornerstone Baptist Church, a new congregation in Red Oak, Iowa. Slade said, “They are hungry for the gospel. Many do not seem to have a clue who Jesus really is.” He said their association DOM, Jim Albers (Ozark Prairie Association), is coordinating the efforts of several churches to reach out to that location.

To connect with these and other partnership missions opportunities, Hedger encouraged Missourians to check their website at www.mobaptist.org/partership-missions.