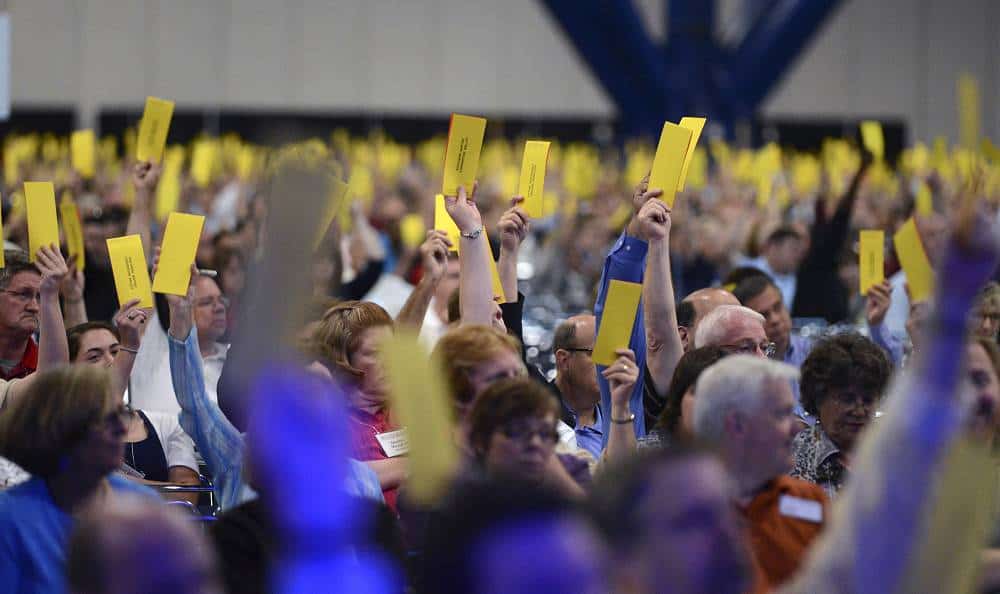 NASHVILLE (BP) – A Los Angeles-area Southern Baptist church that some media reports said adopted a “third way” position regarding homosexuality in reality never voted to adopt any position on the issue and split into two groups in early June amid unresolvable deadlock, an elder at the church has told Baptist Press.

A vice president with the Southern Baptist Convention (SBC) Executive Committee (EC) said EC staff members gathered information on New Heart Community Church in La Mirada, Calif., during the week leading up to the SBC annual meeting in Baltimore and were prepared to provide that information to President Fred Luter and the Credentials Committee if any motion was presented concerning the church. However, the one motion presented regarding New Heart was ruled out of order because it directed SBC officers to take action prohibited by Article IV of the SBC Constitution.

“Given the high profile of the story, SBC Executive Committee staff and many SBC messengers fully expected one or more motions at the SBC annual meeting requesting the convention to withdraw fellowship from the church,” Roger S. Oldham, EC vice president for convention communications and relations, said. “A motion to withdraw fellowship from the church would have been in order, we believe, and could have been acted upon during the annual meeting or referred to the Executive Committee for consideration at its next meeting.

“… The fact that there was no motion made by a messenger to withdraw fellowship from New Heart Community Church during the SBC annual meeting does not preclude the SBC Executive Committee from addressing this matter, something that could happen at its next meeting, depending on what takes place with the church between now and then. EC staff continues to gather information to prepare a background for its officers and members in preparation for the September meeting,” Oldham said.

Contributing to the complexity of the situation, the EC had been uncertain whether New Heart was an independent church or a church-type mission under the watchcare of a sponsoring church. The SBC’s Annual Church Profile database erroneously listed New Heart as a church-type mission based on data reported years ago. But former New Heart elder Cass Bensberg recently told the EC that the church constituted independently about a decade ago.

Bensberg, an elder at New Heart for 12 years, told Baptist Press that on May 18 the church voted on four possible courses of action in light of a February announcement by Pastor Danny Cortez that he no longer believes all homosexual acts to be sinful. Before the vote church members stipulated that a two-thirds majority was required to take any action. The church also stipulated that it would separate peacefully into two groups and divide its assets if there was not a two-thirds majority. Because there was no such majority in favor of any option, the church separated as agreed.

The four options presented were:

• Terminate Cortez as pastor and maintain the traditional Christian view that homosexuality is sinful.

• Establish New Heart as a “third way” church, neither affirming or condemning homosexuality but “agreeing to disagree.”

The faction that went with Cortez retained the name “New Heart Community Church” and the articles of incorporation. That group will meet in two private residences over the summer and plans to rent property in the future. The group includes an estimated 50 people, with some gay-affirming families joining since the split, Bensberg believes.

In a statement emailed to the Executive Committee, Cortez said the congregation “will develop and articulate a clear Third-Way position statement.”

“While New Heart Community Church has received considerable attention recently, much of that attention has resulted from sensationalist media coverage,” Cortez wrote. “We wish to state that as a church we have done nothing officially to affirm, approve of, or endorse homosexual behavior, and so remain in accordance with Article III of the Southern Baptist Convention’s constitution, even as our individual members, including recognized leaders both paid and unpaid, hold to varying perspectives regarding same-sex marriage.

“Still, in the midst of our congregation’s peaceful and prayerful disagreements regarding same-sex marriage, we remain unified in our vision to invite LGBT persons into fellowship and communion. Moving forward, members of New Heart will develop and articulate a clear Third-Way position statement,” Cortez wrote.

Oldham made clear that Cortez’s or the church’s opinions that they “remain in accordance with Article III” do not bind the SBC or its Executive Committee, either of which may make a unilateral and binding decision about whether cooperation should continue.

The faction of New Heart that voted to maintain a traditional Christian stance includes about 40 people and is considering whether to constitute as a church or simply disband. The traditional group includes three of New Heart’s four elders – Cortez being the fourth – and continues to meet in the facility New Heart rented from a sister church.

The sister church, which Bensberg believes is not Southern Baptist, granted New Heart time to make a decision regarding homosexuality but said it would not allow teachers in its facility who refused to denounce all homosexual acts as sin following the decision, Bensberg said.

“The entire process was very painful and is probably the most bizarre experience I have experienced in my Christian life,” Bensberg wrote in an email to the EC. “We parted peacefully on June 8th although there are many who are still processing all that occurred.”

Bensberg told BP that if the traditional group forms a new church, it will align doctrinally with the 2000 Baptist Faith and Message.

Several factors contributed to the division and chaos at New Heart, Bensberg said. Among them:

• Cortez studied “homoerotic” literature secretly for two and a half years before revealing his extensive reading to either the elders or his wife. Only one man loosely associated with the church knew that Cortez was in the process of changing his mind on homosexuality.

In a Feb. 9 sermon posted on YouTube, Cortez said he also spent significant time in traditionally homosexual venues like gay bars during his study and “saw the presence of God there.” For more information on Cortez’s change of mind, see the June 17 BP report.

• New Heart did not have a formal membership process and did not vote as a congregation on whether to receive new members. Anyone was regarded as a member who was presumed to be a follower of Jesus, was involved in church ministries and contributed financially to the church.

• All “members” 12 and older voted on whether to affirm homosexuality. Some children and youth voted for a third way even though their parents voted to maintain the orthodox position, Bensberg said. He attributed the youth vote in part to the young people’s friendship with Cortez’s son, who, according to Cortez in his Feb. 9 sermon, recently announced that he is homosexual.

• Approximately 12 people who hold an orthodox view of sexuality left the church in the months leading up to the final vote. Their presence likely would have resulted in a 50-50 split, Bensberg said.

• New Heart had a significant degree of biblical illiteracy among its members, Bensberg said. When the orthodox group began meeting separately, they launched a study of basic doctrines like the inerrancy of Scripture and the Trinity only to discover that many people didn’t know foundational Christian theology.

The California Southern Baptist Convention(CSBC), with which New Heart cooperates, said it is attempting to gather information and decide what, if any, action to take.

Fermín Whittaker, CSBC executive director, told the California Southern Baptist newsjournal, “I am burdened when Christians, and especially churches, make decisions that are not compatible with Scripture. It seems too easy to be lured into unbiblical positions of belief by the power of today’s culture. Scripture is clear that the practice of homosexuality is sin and is not harmonious with teachings and traditions of a New Testament congregation.

“My office is attempting to discover firsthand the truth of what Danny Cortez and the members of New Heart Community Church in La Mirada believe regarding homosexuality in the life of their church. At the same time, CSBC is attempting to determine processes and procedures for addressing this situation. Once these are known, CSBC leadership will make decisions of how to proceed regarding its relationship with New Heart Community Church.”

New Heart also cooperates with the Los Angeles Southern Baptist Association, but Bensberg estimated that the church has not had contact with associational leadership in a decade.