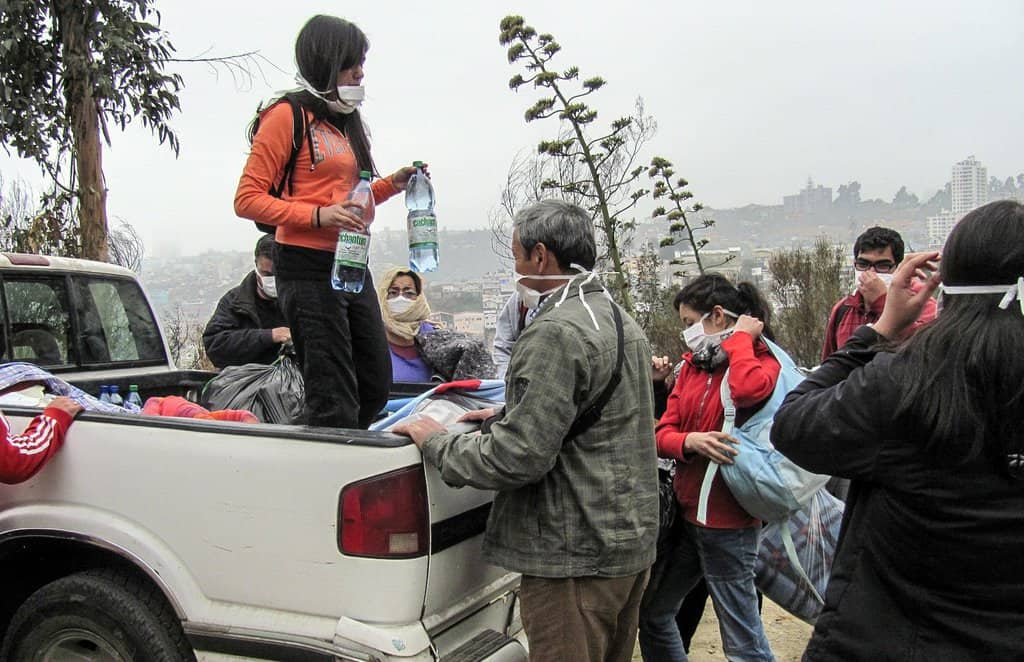 VALPARAÍSO, Chile (BP) – Baptists in Chile are providing food, supplies and the hope of Christ to victims of a large and fast-moving forest fire that has killed 15 and displaced at least 12,000 people in Valparaíso, Chile.

The fire broke out April 12 and rapidly spread through some of the 42 hillside neighborhoods that comprise the historic city, Chile’s chief seaport. Because of strong winds, firefighters have had difficulty containing the blaze, which has destroyed close to 2,500 houses in the densely populated area, according to Chilean news reports.

Chilean Baptists responded quickly to the disaster by designating Iglesia Bautista Monte de Sión, translated Mount Zion Baptist Church, on Playa Ancha Hill as a collection point for donated food and supplies for victims, said Karen Wright, International Mission Board (IMB) missionary in the nearby city of Viña del Mar. Wright, from Louisville, Ky., is the instigator of a church-planting project involving Chilean and Southern Baptist churches in reaching the Chilean community.

Chilean Baptist volunteers expect to soon begin a feeding project at a school on Las Cañas Hill, a badly burned area that has no Baptist church, Wright said. The door for that ministry opened April 15 when Wright and Damaris Zapata, director of Christian social ministries for the Chilean Baptist Union, met school officials at the disaster zone.

Chilean Baptist volunteers will cook and serve meals to families who are camping out on land where their burned houses were located. “People are afraid if they leave, they’ll lose their land,” Wright explained.

As that relief project gets underway, “Our dream and our hope is that, out of this, at least one church will be planted and that many people will come to the Lord,” Wright said. “Valparaíso is a city plagued by drugs and alcohol [abuse] and a lot of social problems. Pray that lives and communities will be transformed” through the Baptist relief and outreach in the area.

“Pray that Christians will find many opportunities to share the hope of Christ in the midst of this tragedy,” Wright asked. “Pray for wisdom as we [Baptists in Chile] determine how we can best help those who are suffering.”

Churches across the Chilean Baptist Union are sending food and supplies, and the Baptist union is collecting an offering for the relief effort. Chilean Baptist volunteers, many of them youth, have been delivering sandwiches, drinks and supplies to residents and workers on some of the badly burned hills, including Las Cañas.

In addition, Southern Baptists have provided an initial $5,000 in emergency relief funds to meet immediate needs. Wright expects those funds will be used to purchase tents to house displaced families and to purchase supplies.

As Wright and Chilean Baptist leaders continue to assess needs, additional funding likely will be requested through Baptist Global Response, Wright said, an international relief and development organization that partners with IMB.

As the relief effort gains momentum, Wright requested prayer that the disaster will spur more Southern Baptist churches to become involved in the 42 hills church-planting project in Valparaíso. Churches that “adopt” a hill are asked to pray for their hill and send volunteer teams several times a year to evangelize and start Bible studies. To learn more, visit www.42hills.org.

Miguel Ángel Lineros, pastor of Achupallas Baptist, said about 12 children attending a school near one of the new church plants lost their homes in the fire. “So our church will be seeing how we can minister to those families,” Lineros said.

Some Chilean Baptist volunteers from the region also are delivering food and supplies to government-operated shelters and are working with some of the children whose families are staying there, Lineros said.

Chilean Baptist prayer leader María Cristina Castillo called on believers to pray for fire victims and volunteers who are ministering to them.

“Pray for children who feel disoriented and afraid during … these days and for their parents who feel inadequate to encourage them,” Castillo, prayer coordinator for Chilean Baptist churches in the Valparaíso region, said. “Pray for families who have lost their homes. Pray for volunteers who are trying to meet the needs of those most affected. And pray that the Lord will give us a vision to meet the needs, and that we will be able to … accomplish this goal.” ν