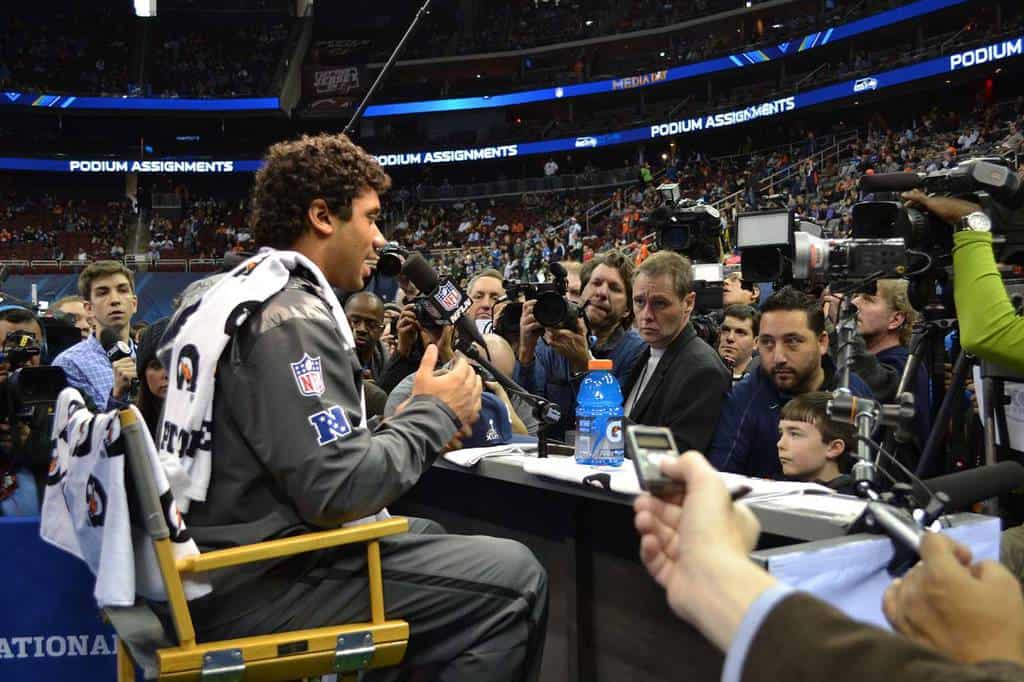 NEWARK, N.J. (BP) – Surrounded by a horde of reporters probing about nearly every aspect of the upcoming Super Bowl – including questions not related such as “Where’s Waldo?” and “Who is your favorite hockey player?” – several Seahawks players were enjoying their moment on one of the biggest stages in sports to share their faith in Jesus.

“God has me here for a very particular reason,” Russell Wilson, the Seahawk’s star quarterback, told reporters as he sat in the middle of cameras and microphones at the Prudential Center here.

“Just to be here in front of all these people, to go against the odds when everybody told me I couldn’t. That’s all God. That’s not me,” Wilson, who at 5-11 has been criticized in the past for his size and ability, said Jan. 28. “My faith … brought me a long way.”

In October, Wilson and several other Seahawks – Russell Okung, Chris Maragos, Clint Gresham and defensive passing game coordinator coach Rocky Seto and running backs coach Sherman Smith – released a 15-minute DVD called “The Making of a Champion.” Each shared their personal testimony and how their faith in Jesus impacts them on and off the football field.

Coach Pete Carroll even helped out with a tweet about the free DVDs being handed out after the team’s Oct. 13 home game against the Tennessee Titans. About 30,000 of the DVDs were distributed to fans outside CenturyLink stadium. The video also is on Youtube and at makingofachampion.org.

After securing their spot in the Super Bowl, Seahawks long snapper Clint Gresham tweeted about the DVD. Gresham, in his fourth season with the Seahawks, described his faith to Baptist Press as “everything to me.”

“… I remember being alone and empty and full of all kinds of junk in my heart, and God came in and cleaned me up and He gave me better love,” the former TCU Horned Frog said. “I just want to tell as many people about that as I can.”

Russell Okung, the Seahawk’s left tackle, nearly gave an altar call during his time with reporters on media day.

“If you guys would have a relationship with Him, I’ll tell you one thing: He saves. Jesus saves,” said Okung, who made the Pro Bowl last season. “He’s everything. He’s better than an abuse, better than any history you [left] behind. He’s better than all of those things. My sincere desire … you’re never too young, you’re never too old. … You can never earn your way. It’s a free gift. Salvation is free for all of you. I’m a living testament that it’s real.”

In the video, Okung shared about his challenges growing up in a single-parent home and never meeting his father who died when he was a young boy. Okung told reporters he believes God has blessed him with this opportunity to share the gospel and impact lives.

“I look back over where I come from and I realize it’s nothing but God, nothing but Jesus,” Okung said.

“I feel like there is no coincidence. I feel like we’ve all been given a platform in some fashion and some way.”