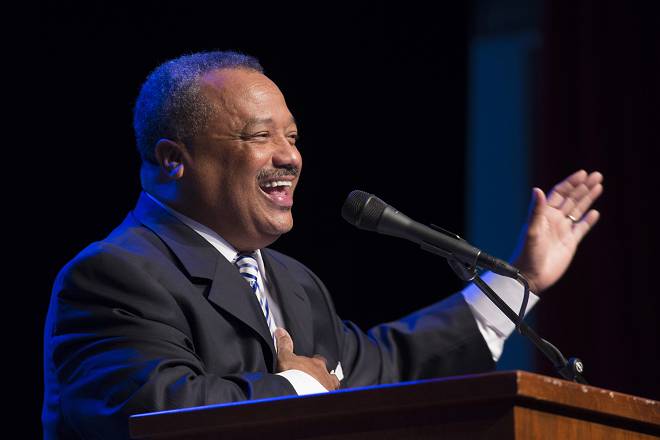 INDEPENDENCE – With the recent Supreme Court rulings on the Defense of Marriage Act (DOMA) and Proposition 8 in California, now more than ever, Southern Baptists must be united under Christ and in accordance with His Scripture, Southern Baptist Convention (SBC) President Fred Luter said during a June 28 question-and-answer session with members of Mount Washington Baptist Church here.

“If there was ever a time for the body of Christ to come together it is now,” said the pastor of Franklin Avenue Baptist Church in New Orleans. “We’re being attacked on every hand. Authority, values, family and marriage is being attacked. Our children are being attacked by the things they are getting involved in.

“One of my frustrations is so many pastors in our churches compromising Scripture. There was no way we as pastors should have been in agreement with the president when he came and said he supported same-sex marriage. How are you going to stand up for that when the Bible says it’s wrong? I was amazed at the number of preachers across the country who went along with that.

“We cannot compromise Scripture. I said at the SBC Annual Meeting in Houston, nothing can be politically right if it is biblically wrong. Homosexuality is biblically wrong, racism is biblically wrong. My frustration is not with the gay agenda or the Supreme Court decision or the Boy Scouts, my frustration is with the Church. If the church would do what she is supposed to do we would have more of an impact in our society. He then cited 2nd Chronicles 7:14: “If my people who are called by my name humble themselves, and pray and seek my face and turn from their wicked ways, then I will hear from heaven and will forgive their sin and heal their land.”

Luter told about the day he was elected SBC president and his first interview with CNN’s Soledad O’Brien. One of her colleagues asked Luter: “You and Obama are African-American, does that mean you will support his agenda for homosexuality?” Luter replied, “No. President Obama is president of the United States. I support him like I have supported every president in that I’m a citizen and live here.

“But on this issue I totally disagree – for three reasons. First, God already defined marriage between one man and one woman and no president can change that. Second, I believe the president made this decision in the midst of a political race to be politically correct and this was a political decision. And third, if same-sex marriage was the norm, none of us would be here. Two men together and two women together cannot make babies.” n