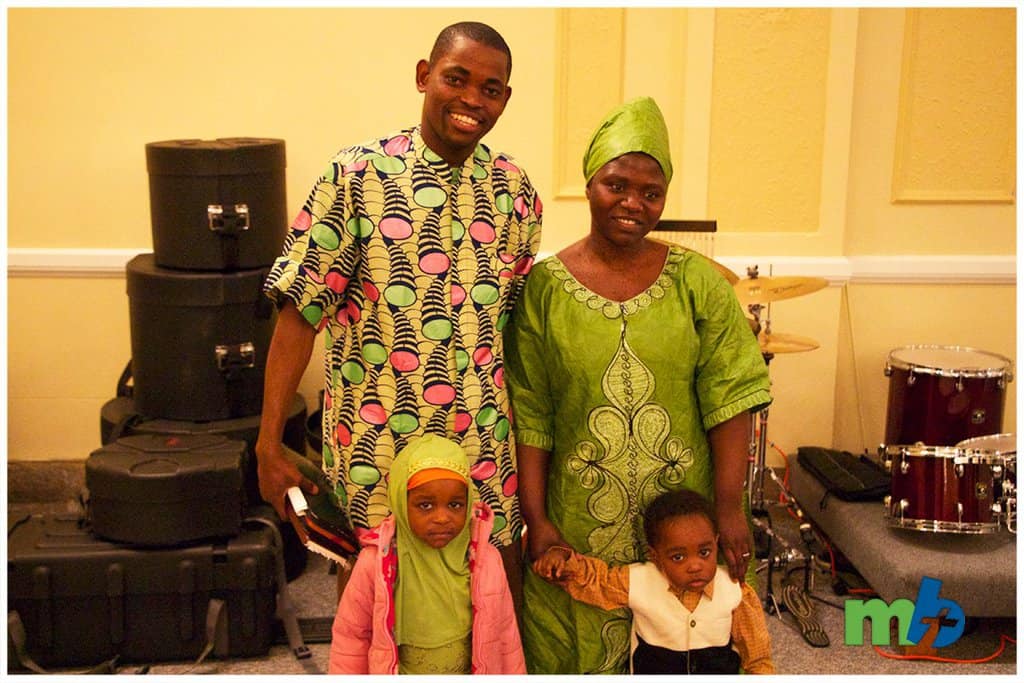 Byamungu, 29, was born in the Democratic Republic of Congo (Zaire) where he was raised by Christian parents whom he thanked during the service. Due to war, his family moved to Tanzania when he was 12 where he stayed in a refugee camp. Dany attended school there and in 1997 repented of his sins and gave his life to Christ. Later that year he was baptized and began leading the choir in his church.

In 2008 Byamungu and his family moved to Phoenix. While there he married his wife, M. Devote, in May 2010. Later he moved to Kansas City where he started attending Central Baptist Church.

Speaking Kirundi, Swahili, French, English and a few other African languages, Byamungu began translating at the Central Baptist services and also helped lead the Burundi choir. Segovia helped mentor him along with others who increasingly saw God use him to lead the Burundi congregation. Segovia then asked Byamungu to consider becoming the pastor of the Burundi congregation at Central Baptist. He was interviewed by several local and international pastors with ties to him and then ordained during the service.
Among those participating in the process were pastors from his churches in Tanzania (Bukuru Eliphase, who gave the message at the service) and Phoenix (Nephtali Ahimera, Burundi ministry pastor at Phoenix First Baptist Church). Also involved were: Ted Davis, a former African missionary and professor at Midwestern Baptist Theological Seminary; Dan and Peggy Rorabaugh, former missionaries who have mentored Byamungu; Luis Mendoza, pastor at Iglesia Cristiana Palabra Viva; Paseo Baptist Church Pastor Gregory Ealey; and Ben Hess, team leader for MBC church planting.

“Pastor Bukuru is the one who was in Africa who helped me to understand more about Jesus,” Byamungu said, “and he was the one when I became a Christian and received Jesus as my Lord and Savior who I was working with in the church where I was leading choir. When I came to America he has kept helping and supporting me.”

Leading up to the ordination service, the Burundi congregation held two celebration services March 9 from 10 a.m. to 1:15 p.m., and from 2:45-10:20 p.m., Unfortunately for the congregation, they could only meet from 3-5 p.m. Sunday as many had to travel back to Arizona and elsewhere. But the congregation made use of the time wisely whether through the worship performed by the African choir or by showering Byamungu, his wife and two children with flowery wreaths and love.

“I think it was a great experience,” Mendoza said. “I think it is a beautiful thing to see how people are able to worship God in different ways. Maybe not the same way we do. Hispanics may worship one way and others another way. What I enjoy the most is to see people being themselves and expressing themselves in the way they feel comfortable instead of being subjected to doing it in one specific way. I really enjoy that part. Obviously from my perspective I’m not used to it, but I enjoyed it very much because I think we all need to be exposed to different types of worship.”

Byamungu said he was thankful for such a great day. He said his goal is to work with God to reach the people of many nations for God with the gospel.

“I thank my family for inspiring me and also Pastors Mendoza and Segovia,” he said. “Today was so great and was such a blessing from God. The church has supported me and they have been excited to be here and to celebrate this great day which God has given. The church is ready to help me because this is not an easy job. We will keep looking to give the church the strength to reach those here.

“I want to thank the church and those who supported me today and also the Missouri Baptist Convention in how they have supported me with this ministry and how they are helping me to minister. I really appreciate all they have done and continue to do.”