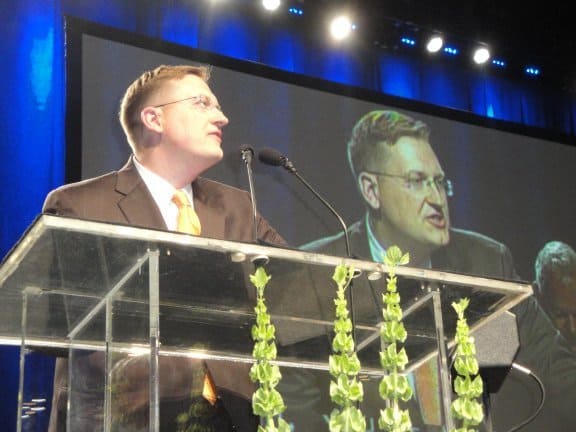 JEFFERSON CITY – A Missouri-based plumbing products manufacturer, whose lead legal counsel is a Missouri Baptist layman, has won the opening legal battle over whether the company must comply with the ObamaCare mandate and provide abortion-inducing drugs in its health care coverage to its employees, even though it violates the conscience of the company’s owners.

Kansas City-based Sioux Chief Manufacturing Co., does not have to immediately comply with the ObamaCare mandate until the 8th U.S. Circuit Court of Appeals hears its lawsuit case in full. The court issued a stay and injunction March 2, preventing the company from having to pay millions of dollars in fines for not complying in the meantime.

Kansas City attorney and Missouri Baptist layman Jonathan R. Whitehead was among a team of Alliance Defending Freedom (ADF) attorneys who successfully argued for the stay and injunction in behalf of Sioux Chief Manufacturing. Whitehead is a member of Abundant Life Baptist Church, Lee’s Summit.

“Americans should be free to honor God and live according to their consciences wherever they are,” Whitehead said. “They have the God-given freedom to live and transact business according to their faith, and the First Amendment has always protected that. Forcing Americans to ignore their faith just to earn a living is unprecedented, unnecessary and unconstitutional.”

Sioux Chief Manufacturing was founded in 1957 by Martin E. “Ed” Ismert, Jr. It is a leading manufacturer and wholesaler of plumbing products and supplies. Members of the Ismert family, who are Catholic, continue to own the business, led by President Joseph P. Ismert.

Whitehead and the other ADF attorneys involved are co-counsel in the case, Sioux Chief Manufacturing v. Sebelius.

“The Constitution does not allow the government to involve itself in religion by deciding what faith is, who the faithful are, and when and where their faith may be lived out,” said ADF Senior counsel Kevin Theriot. “Confining our faith to our homes and our churches is not the job of Washington bureaucrats. Freedom is God-given, not government-driven.”

ADF attorneys and allied attorneys are also litigating seven other lawsuits against the mandate on behalf of privately owned companies across the nation, including Southern Baptist-supported Louisiana College in Ruston, La.