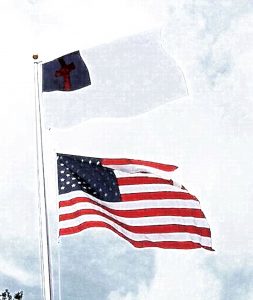 SHELBY, N.C. (BP) – North Carolina pastor Rit Varriale wants to see churches fly the Christian flag above the American flag as a biblical statement, reversing flag etiquette that calls for the American flag to be flown in the prominent position. Varriale, as senior pastor of Elizabeth Baptist Church in Shelby, N.C., said the church installed its first-ever flagpole in order to raise the two flags in a special ceremony after morning worship on Sunday (July 5) in which the Christian flag was … END_OF_DOCUMENT_TOKEN_TO_BE_REPLACED