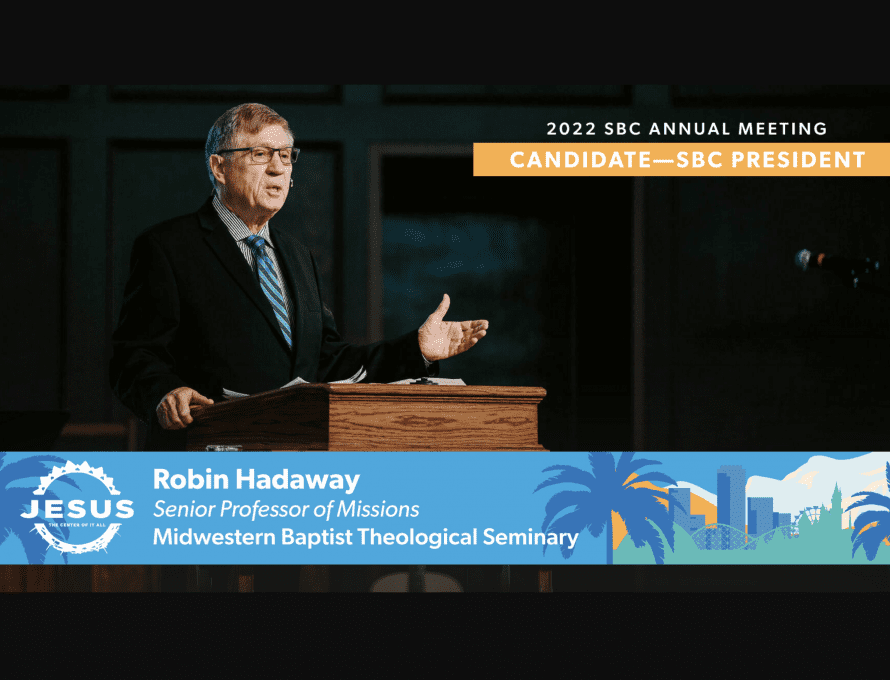 Hadaway becomes the third announced candidate for the office. Florida pastors Willy Rice and Tom Ascol have already been announced as candidates.

Hadaway began his ministry career pastoring churches in California and Arizona before serving with the IMB on the field in Africa and South America. While on the field, he was involved in church planting in Tanzania, starting churches among unreached peoples in Northern Africa and directing church planting efforts in Eastern South America. During his stint in South America, Hadaway served as a regional leader for the IMB leading more than 300 missionaries in the region.

“Robin Hadaway has a passion for missions, evangelism and church planting,” Akins told Baptist Press in a statement. “He believes thousands of Southern Baptists – men and women, pastors and laypersons – need to drop what they are doing and seek a career in home and foreign missions.”

Akins also said that, if elected, Hadaway would strive to “see 1,000 new WMU chapters started,” saying “WMU has the backs of our missionaries by providing what’s often lacking – prayer and financial support.”

Following his time with IMB, Hadaway spent nearly two decades at Midwestern Baptist Theological Seminary as a professor of missions and serving in a variety of administrative roles including interim president, dean of students, vice president for institutional initiatives, interim CFO and interim administrative vice president.

Prior to his call to ministry, Hadaway served four years in the U.S. Air Force as a pilot attaining the rank of captain, worked as military air traffic controller and finished his career as an administrative officer.

Hadaway is no stranger to service in the SBC having served on the 2000 SBC Credentials Committee, the 2005 and 2006 SBC Resolutions Committees, the 1981 Local Arrangements Committee and the planning committee for the 1984 Baptist World Alliance meeting in Los Angeles.

Hadaway and his wife, Kathy, returned to California after he retired from residential teaching a year ago. He now serves as MBTS’ senior professor of missions and resides in Oceanside, Calif. The Hadaways are currently members of New Song Community Church in Oceanside. According to its Annual Church Profile statistics, New Song reported 26 baptisms in 2021, undesignated receipts of $1,648,176.96 and giving through the Cooperative Program of $16,750.02 (1.02 percent of undesignated receipts).

Hadaway is a graduate of the University of Memphis, has an M.Div. from Southwestern Baptist Theological Seminary and D.Min. from Gateway Seminary as well as a D.Th. from the University of South Africa. He and Kathy have three children and two grandchildren.