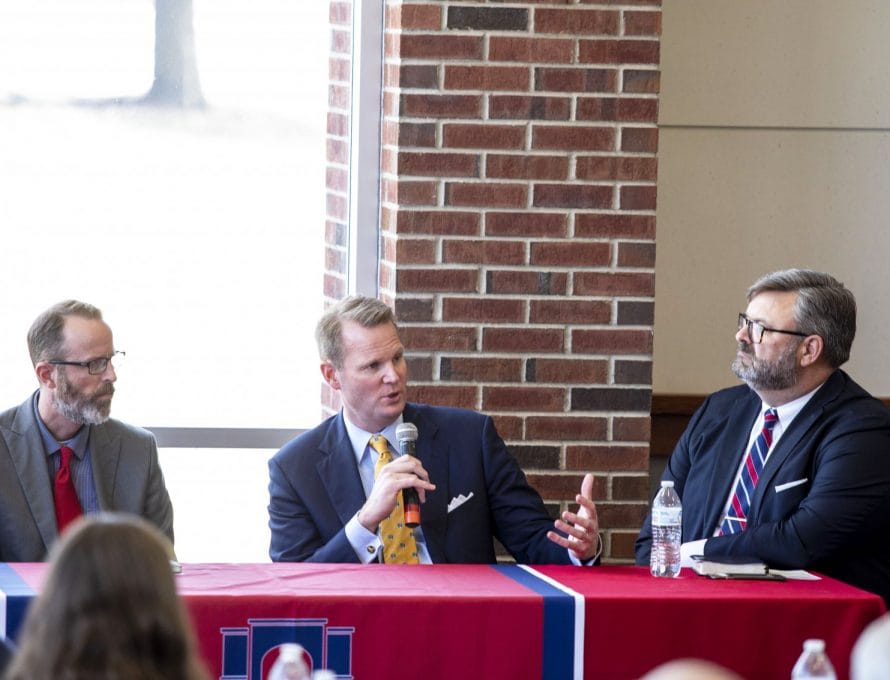 HANNIBAL – Nearly all private colleges and universities in the U.S. began with one purpose in mind: theological training: Harvard, Yale, Princeton and others. And yet one by one, decade by decade, compromise by compromise, they jettisoned their Christian mission and strayed farther and farther away from their founding principles.

Anthony Allen, president of Hannibal-LaGrange University, attended such an institution as an undergrad at Duke University in North Carolina.

Allen explained that Washington Duke, the namesake of Duke University, said of the Quaker-Methodist institution, he “wanted every student to know Christ supremely revealed through the Scriptures.”

“What an amazing mandate,” Allen said. “That is not the mission of that school today.”

And it wasn’t the mission when Allen arrived on campus as a freshman. His professors taught that the Bible was all myth, Jesus wasn’t raised from the dead, etc. Allen said God used that experience to strengthen him, but also to guide him toward ultimately leading an institution that “thinks Christianly about everything, across the curriculum.”

Allen’s comments were part of a panel discussion during a “mini” For The Church Conference, hosted by HLGU and Midwestern Baptist Theological Seminary, Feb. 19. He was joined by MBTS President Jason Allen; HLGU professor Eric Turner; and MBTS’s Nathan Harris as moderator. They focused on the role of theology in higher education. The discussions ranged from the relationship between seminaries and churches, to sufficiency of Scripture and being obedient to God’s call.

Jason Allen urged the crowd on HLGU’s campus not to think of graduate or undergraduate education as merely a box to be checked.

“I do not view seminary as a credentialing process,” he said. “A diploma is not your credential. I view seminary as – and I hope students receive it as – preparation for faithful ministry service. Formal preparation is a good thing, but my ambition is not to sell X amount of hours, or have a big enrollment or have this many graduates; it’s to see a generation of gospel servants, pastors, ministers, missionaries, etc. train for more faithful service.”

To that end, he said MBTS – and other institutions that focus on training up Christians to engage with the world – work hard to train not just the heads of students, but also the hearts and hands.

“We are a failing institution if we graduated generations of ‘seminoids’ who have a lot of head knowledge but it hasn’t impacted their heart, their life in Christ, their Christian living day to day,” he said.

Anthony Allen agreed, saying that each Christian – regardless of job or educational background – is called to ministry.

“Sometimes we have perpetuated the idea that only Christian studies majors are really going to be able to do something for the Kingdom,” he said. “One of the things we try to do is help everyone understand they have a calling to serve God through their vocation. If you’re going to be a businessman, a nurse, or whatever, you’re called to serve God through your profession.”

Turner echoed the idea that a Christian worldview should be integrated into everything the Christian does, seminary degree or no.

“We need Christian elementary school teachers, and police officers to help with the recovery of this idea of John Bunyan’s and others – this wedding of vocation and calling. I’m not seeing those as separate. For a long time, our culture has seen those be too separated, that you have a job and go to church on Sunday, and they don’t need to mix.

“I think that’s going to become even more critical if the culture continues to go the way it goes,” Turner continued. “It could revert and it could go the other way. We hope and pray that, but if it doesn’t, we’re going to need everyone on the front lines.”