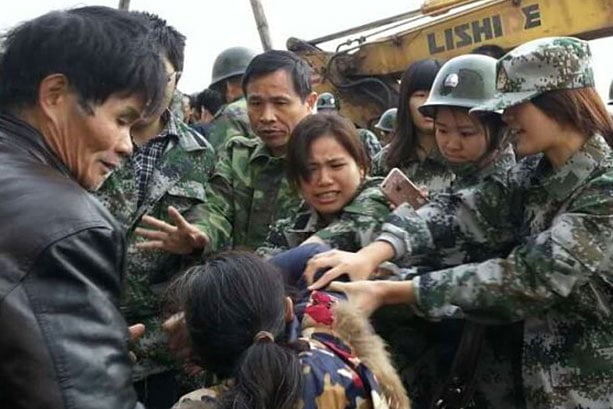 CHINA – Chinese authorities get into an altercation with a woman defending her church building, which was set to be demolished by the government. The incident was only one instance of increasing government pressure on and persecution of Christians in China. China Aid photo/Morning Star News

BEIJING, China – In the early hours of June 4, 1989, Chinese troops opened fire in the Tiananmen Square here, where student protesters gathered to call for greater freedom and democratic reform in the Communist regime.

During the previous weeks, similar protests had spread to nearly 400 other cities, including Wuhan – a city located 750 miles to the south of Beijing. At the time, Wuhan was the home to then newly-weds Wenping Qiu and Lisa Sun. They serve today with a Missouri Baptist mission church started by Second Baptist Church, Springfield, in 2010 to reach Chinese students at Missouri State University (MSU).

Until the summer of 1989, the couple held high hopes for a better life. “We were young,” Wenping recalled. “At that time, we relied on our government to have a better life.”

But then June 4th came, and the clash between student protesters and the Chinese government became violent.

“Troops backed by tanks and armored personnel carriers battled crowds of civilians for seven hours before reaching the (Tiananmen) Square shortly before dawn today,” a declassified report to the U.S. Secretary of State read that day. “Student demonstrators began to leave Tiananmen before the troops moved in; troops opened fire on those who remained. Two weeks after martial law was declared, the government again controls the symbolic center of the country.”

Though no one knows with certainty how many were killed during the now infamous “Tiananmen Square Massacre,” declassified U.S. documents from the time estimated between 500 and 2,600 deaths, as well as 10,000 injuries.

Watching events unfold on June 4, 1989, from Wuhan, Wenping and Lisa tried to make sense of the violence. “The crack-down of the student protest shook us,” Wenping told The Pathway. Lisa added, “It seemed like we couldn’t trust anybody, and we lost all hope. We were so desperate.”

But their thirst for true hope was soon satisfied. That morning, they raised their concerns with an English teacher at the Wuhan Institute who, unbeknownst to them, was also a Christian missionary. Though they had lost their confidence in the government, the missionary told them, they could “trust Jesus.”

So, that morning, they prayed for the first time in their lives, surrendering themselves completely to a Savior and Lord whom they had never before heard about.

Meanwhile, for many watchers across the globe, the 1989 massacre showed how far the Communist regime would go to maintain its authoritarian grip on the nation – a grip that, more than 30 years later, is now being tightened around millions of Christians living in China.

No one knows exactly how many Christians live in China today. But Historian Mark Noll remarks in his book, The New Shape of World Christianity (IVP Academic, 2009), that each Sunday more people attend churches in China than in all the nations of Europe combined.

Open Doors, a ministry that supports persecuted Christians across the globe, estimates as many as 97 million Christians in China (See page 13 for an exclusive interview with Open Doors President David Curry). More conservatively, some researchers estimate more than 60 million Christians, according to Sun Jin Park, Dean of Asian Studies at Midwestern Baptist Theological Seminary (MBTS) in Kansas City.

In any case, Park said, China’s Communist regime feels threatened by the rapid growth of Christianity, and its leaders are “promoting a national policy of militant atheism.”

Moreover, in recent years, Chinese President Xi Jinping has consolidated his power within the Communist party, evidenced especially by his removal of term limits from the Chinese presidency in 2018. And this consolidation of power doesn’t bode well for the nation’s people of faith, according to Olivia Enos, senior policy analyst for the Heritage Foundation’s Asian Studies Center.

Indeed, since 2018, Chinese authorities have hardened their commitment to the “Sinicization” of China’s religion – “which is,” as Enos wrote in 2018 on www.heritage.org, “the (Chinese Communist Party’s) attempt at both secularizing and subjugating religious thought and practice to the control of the party.”

As a result, the Chinese government has demolished churches, arrested pastors and other Christians, banned the sale of Bibles online and prohibited anyone under the age of 18 from entering a church building.

As of Feb. 1, 2020, pastors in some areas of China can’t lead funerals outside of their church buildings. And, according to the new regulations, “no more than 10 family members of the deceased are allowed to read scriptures or sing hymns in a low voice” during funerals.

According to MBTS’s Park, at least 100 Korean missionaries have been expelled from the country, religious leaders are prohibited from studying theology outside of China, and the Communist Party is publishing its own, “sinicized” version of the Bible. Meanwhile, advanced technology allows the government to closely monitor Christians and churches.

Nevertheless, Park told The Pathway that evangelical leaders in China remain hopeful in the face of these trials.

During a meeting in South Korea last year, some underground church leaders told Park that they recall the intense persecution that ensued during the “Cultural Revolution” of 1966-1976, when Former Communist Chairman Mao Zedong declared that religion had been completely wiped from the land. Even during that time, Christianity survived and spread.

“Someday God will help us,” these church leaders told Park, “and our Chinese churches will prevail again.”

But Park added that the increased pressure on Christians in China may be having a ripple effect outside of the country – particularly, among Chinese students pursuing their education in the United States.

‘The fruits of our mission’

Wenping sees this ripple effect among some of the roughly 700 Chinese students who attend MSU in Springfield, where he also serves as a research professor of agriculture.

“It is more challenging to share the Good News with students and scholars from China in the last two to three years,” he said. Some students are more hesitant to hear this message or to join Wenping and Lisa at the Chinese mission church, lest they find themselves in trouble with authorities at home.

“They are very much concerned,” he said, “but amazingly some still want to know about our faith.”

Even so, Wenping and Lisa continue to trust Jesus as He works not only in China, but also among Chinese students at MSU.

“God is still at work,” Wenping said. “He is still in control. Nobody can slow down, nobody can stop, His work. Nobody.”

Because their mission church reaches university students, Wenping and Lisa have to endure the “bitter sweet” experience each spring of saying good-bye to graduating students they’ve ministered to and loved. But they’ve glimpsed what God is doing through these graduates across the United States and around the globe.

Earlier this month, traveling to the Silicon Valley, Calif., they met two young ladies who formerly attended their mission church in Springfield. “One had been lost (when she came to MSU),” Wenping said. “The Lord changed her life and also brought salvation to her parents.” Today, both women continue to serve the Lord and His church.

“We are so thrilled,” Wenping said. “We are so joyful to see the fruits of our mission.”