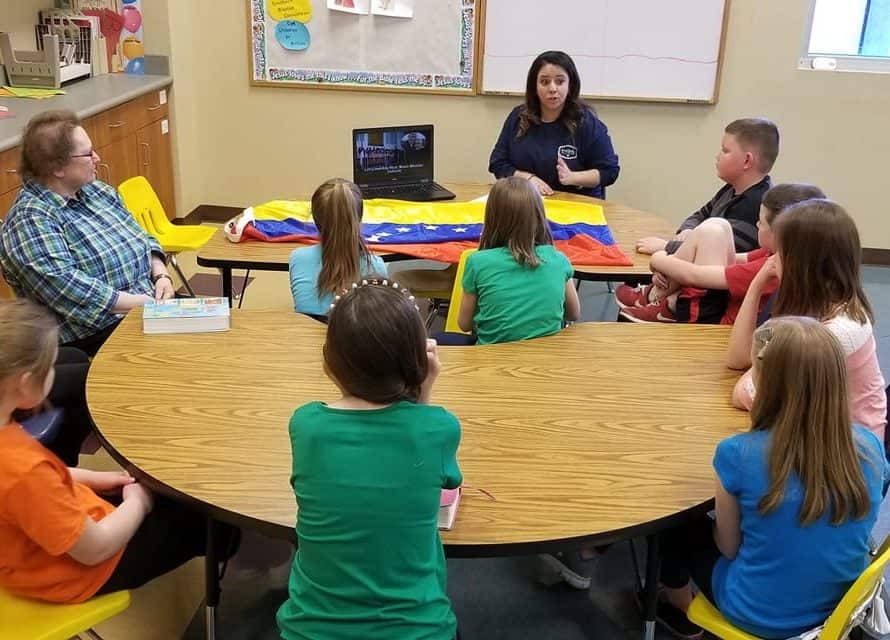 OZARK – Elsy Campos-Shuford shares with kids from FBC Ozark MO about how the vision of a Christian businessman from Tennessee, Maxey Jarman, led him to the provide for the establishment of a Baptist church in every South American capital city. Elsy became a believer and received her spiritual formation at one of those churches, Central Baptist Church in Caracas, Venezuela. Submitted photos

NIXA – Director of missions Philip Shuford said he has four kinds of churches in his diverse Baptist association, which spans three counties in southwest Missouri. The Tri-County Association has: suburban churches near Springfield, tourism-oriented churches in the city of Branson, lake churches which tend to attract retirees and small rural Ozark mountain churches.

He and his wife Elsy and their two children, minister as a director of missions and wife in this diverse set of subcultures—from very musical and professional urban settings to informal, quiet rural churches out in the countryside. Elsy is a Spanish instructor at Southwest Baptist University in Bolivar. They stay busy in the Ozarks, but their hearts also go back to Venezuela, where Elsy Campos-Shuford was born, raised and educated.

Her parents, an airline pilot and a pediatrician, were saved in Central Baptist Church, Caracas, Venezuela. That church was started by Maxey Jarman, an American shoe manufacturer and philanthropist. Jarman started and built Baptist churches in every South American capitol city in the 1950s. Elsy grew up with a sister in a fairly affluent home and a loving Christian family.

She studied in dental college and earned her degree. But she moved in 2000 to Ft. Lauderdale, Florida where her sister had emigrated. She wanted to study English and was planning to move back home eventually. But that changed.

A young minister, named Philip Shuford, visited her Hispanic church in 2001 as a representative of the Gulf Stream Baptist Association, where he was an ethnic church consultant. It turns out that her sister along with the wife of her pastor had spotted Philip at a conference and knew he should be introduced to Elsy. It was arranged for Philip to preach at their church. Philip met Elsy and that led to their marriage in 2002.

Philip’s background was from Winston-Salem, North Carolina in an Anglo family. But he always had an interest in culture and sociology. He studied languages, particularly French and Spanish, and went to school at Mars Hill College, majoring in sociology. He then served as an International Mission Board Journeyman for two years. His seminary studies were at Southwestern in Ft. Worth, Texas. He served in some church staff and pastoral ministry settings, mostly in Hispanic churches. Shuford says he feels God has called him to missions work. He always thought that might be in Latin America, but instead the Lord has led him to Southwest Missouri.

The Tri-County Association called him as DOM in 2013. Philip says “I’ve always been a student of culture and we have these four kinds of churches and communities here.” He said “I love working with the churches and pastors and helping them understand their context is key.”

He said the “lake churches” always have many retirees moving into them and they are about age 65 when they move there. But there is about a seven year window before they tend to move back to their home communities to be near their families as health problems crop up in their mid 70’s.

The Branson churches are highly professional and have tremendous musicians in them, many who work in the Branson show theaters. But there is a very seasonal influx of attenders and tourists in the spring, summer and fall. Then there is a 50 percent reduction in attendance in the wintertime.

Suburban Springfield churches are typical of many urban and suburban communities. The towns of Ozark and Nixa contain churches that are family oriented and accustomed to urban lifestyles.

But go 20 to 30 miles south in the Ozark mountains and small rural churches still dot the two lane highways that wind around the hills and river valleys.

Shuford said one rural pastor is a young man, having served a country church for just a couple of years. But he indicated he is frustrated that the country church does not seem to want any change. Shuford tries to encourage pastors like him and help them engage their rural congregations and not quit.

Another pastor left a suburban church in Ozark to move to rural Stone County. A successful outreach venture in Ozark had been to have a clothing give-away to reach out to the community. But in the rural setting, the clothing giveaway method fell flat. The townspeople did not even come. Not one person showed up for two consecutive weeks. The method just did not work in that culture.

Shuford helps the pastors figure out the sociology of these ministry settings.

Since Elsy is a native of Venezuela, her heart is heavy because of the political unrest and the poverty being inflicted upon the people by the corrupt government leaders. A few years ago she and Philip organized a mass effort of “buckets of food” for her native country. Churches collected 110 five gallon buckets of non-perishable food. The association rented a truck and they drove it to the Port of Miami where the collection of buckets was put on a ship to Caracas to be delivered to Elsy’s home church.

But recent news has been bittersweet. She recently posted on her Facebook page: “Please pray for Venezuela. … The military is burning the humanitarian supplies meant for the suffering people. … Please pray for my people!”

Elsy recently graduated with a Masters degree in applied second language acquisition from Missouri State University. She was offered a teaching position at Southwest Baptist University in Bolivar. There she teaches Spanish classes and sponsors the Spanish club.

“It is a place where we are family. We care for each other, for the students and we share our faith. We give the students the tool-set so they can be whatever God wants them to be,” Elsy said.

From Southwest Missouri, a ministry couple watches and prays for Venezuela, teaches students to speak Spanish and ministers in a diverse setting of churches.