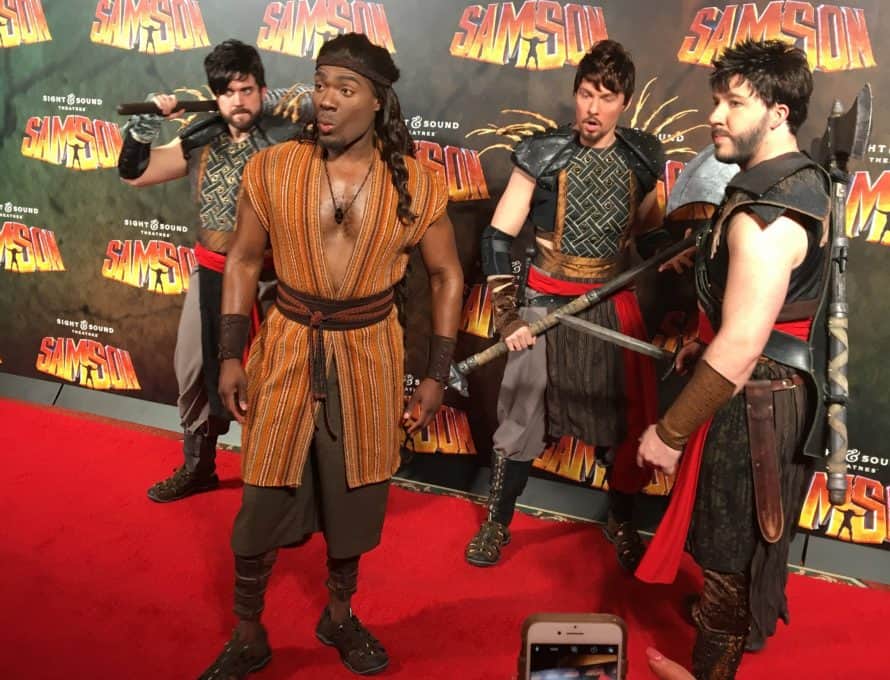 BRANSON – Isaiah, who plays the title character in Sight & Sound’s “Samson,” poses on the red carpet with three Phillistines from the show. Pathway photos by Brian Koonce.

BRANSON – As much as I love “Les Miserables” and “Phantom of the Opera,” those stage musicals do not have llamas or camels. Advantage: Sight & Sound Theatre’s ‘Samson.’

If you’ve been to a Sight & Sound production, you can go ahead and stop reading now. You already know the quality, thought and skill they put into the productions, so just save yourself a few minutes; go ahead and book your tickets for “Samson” and start planning that road trip down Highway 65.

I had never been to a show at the 2,100-seat theater in Branson with its 300-foot wrap around stage before Sight & Sound invited me to the premier of “Samson,” their latest production. It will not be the last time I see a show there. I’ve seen stage shows in New York, London and Madrid, and “Samson” stands toe to toe in the quality of acting, the “hum-ability” of the songs, and the technical artistry that is the costumes, sets and effects.

It helps that “Samson” is tailor-made for an epic story-telling spectacle. The climactic scene where a blinded, captive Samson pushes down the pillars of the Phillisitine temple is flat out amazing, even when you’ve spent the prior two and half hours anticipating it. Other amazing effects include when Samson burns down fields by tying flaming sticks to foxes’ tails and a few key “slow motion” fight scenes. I’m still not 100 percent sure how he wins a tug of war against 10 men, easily dragging them across the stage, but the effect is remarkable. I’d actually recommend a seat a little further back in the audience than you might normally choose so you can fully appreciate all the action on the wrap-around sets.

But “Samson’s” biggest asset is just how much the people involved truly do care about the story they’re telling. Their motto is “bringing the Bible to life,” and they do that. They told a story about a deeply flawed, but still relatable superhero of a man, one who constantly struggles to choose between his will and God’s, and they did it in a very thoughtful (and funny) way. If there’s a detail to be mined in the biblical narrative, they mined it. When details were scarce, they add story elements that are compatible with Scripture (for example, while the actor playing Samson is definitely fit, the producers chose not to cast an Arnold Schwarzenegger, bodybuilder type to emphasize that his strength comes from God, not merely from eating his Wheaties).

On top of that, they found a very organic and natural way to frame the story as a tale of grace and redemption. Samson faces grave consequences for his sins, but his ultimate trust in God sets up a very clear and direct gospel presentation.

So much of my mental image of the story of Samson and Delilah was a cartoonish summary. Of course, he is super strong, allows himself to be used by Delilah and ultimate destroys the Philistine temple, but there is a lot more than you might think in those three chapters in Judges. And perhaps a lot less. For example, Delilah has a reputation of being a young femme fatale who seduces a mooney-eyed Samson (I wonder how much the 1949 Cecil B. DeMille film, “Samson and Delilah,” has to do with this). But all the Scripture really has to say about her and the way she and Samson met is this one sentence: “Some time later, he fell in love with a woman named Delilah” (Judges 16:4).

This allows Sight & Sound to draw up a more compelling (and family friendly) character for her, even though she’s far from a hero and still betrays Samson. She’s presented as a much fuller character in the play while never contradicting Scripture.

Kelsey Andrae, one of two women playing Delilah in the production, told me that’s part of what makes her a fun character to portray.

“She’s relatable,” she said. “We’re all sinners and have had times of indecision. She’s looking for fulfilment but can’t seem to find it.”

If you do need your stories to have cartoonish villains, ‘Samson’ gives you the Philistines, one of whom is played by Ryan Wilcox, a member of First Baptist, Branson and seven-year veteran of Sight & Sound.

“It’s more fun than you’d think to play a bad guy,” he said. “You don’t have to show sensitive emotions; it’s all anger and rage. It’s very different from who I am in real life, but it’s so fun to do what I love in a way that is epic, life-sized and focused on the gospel. The fun behind it is fantastic. The art behind it is fantastic. People who have grown up in church will enjoy seeing a different side of the story, but people who aren’t familiar with the story will come to be entertained and