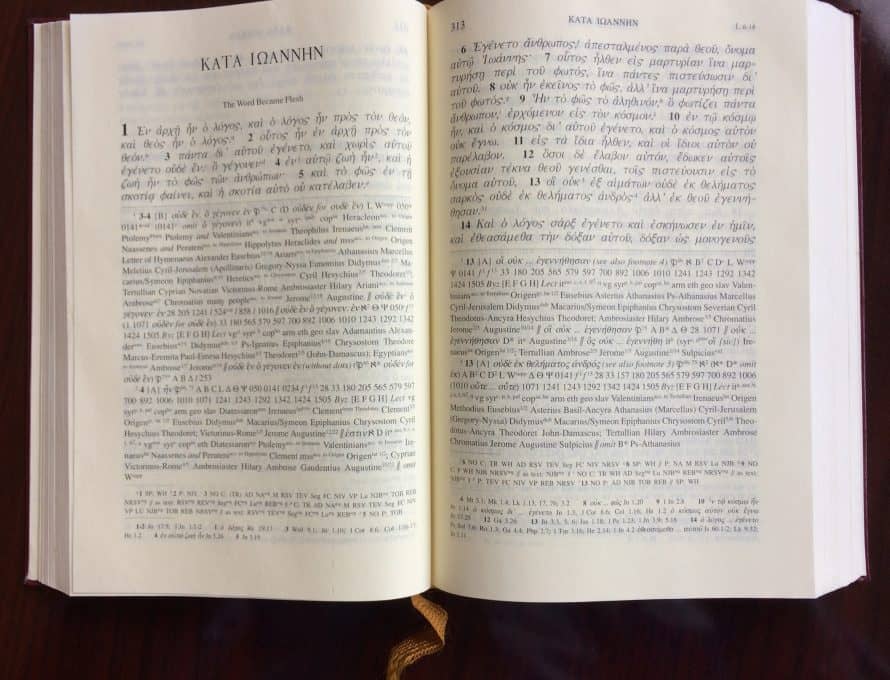 LOUISVILLE, Ky. (BP) — Especially in this information age, pastors and other seminary graduates have no excuse for letting their grasp of New Testament Greek slip away, say Greek scholars at multiple Southern Baptist Convention seminaries.

Having a firm grasp of New Testament Greek was the emphasis of Southern Baptist Theological Seminary’s Jan. 13-14 Alumni Academy. And it also has been a theme of publications by professors at other Southern Baptist Convention seminaries.

“It’s never been easier to both maintain and to grow in your Greek skills,” Robert Plummer, professor of New Testament interpretation at Southern, said during the Alumni Academy event.

But to keep up with their Greek — and especially to improve on their knowledge of it — pastors must habitually study the language, he said.

“Greek is like the neighborhood cat,” said Plummer, coauthor of the forthcoming book “Greek for Life: Strategies for Learning, Retaining, and Reviving New Testament Greek” (Baker Academic). “If we don’t feed it, eventually it will leave.”

Amid the pressures of ministry, the disciplined study of Greek takes effort, Plummer told Baptist Press, but the rewards are invaluable.

“We have great English translations,” Plummer said in an interview. “Many pastors may never get a chance to learn Greek, and they will be faithful. But if we have the opportunity to study Greek, how could we not want to be as close to the inspired words of the apostles as we can be?”

‘Kissing your bride through the veil’

Andreas Köstenberger, senior research professor of New Testament and biblical theology at Southeastern Baptist Theological Seminary, said a pastor’s ability to maintain his understanding of Greek depends largely on the value he sees in it.

“People have to be convinced that Greek is important enough to keep up with, because there are so many other pressures — those of administration and counseling and meetings and so forth,” Köstenberger told BP.

He reminds preachers who devalue Greek that their authority is derived from the original words God inspired biblical authors to write. Processing those words in the original language helps a minister understand their meaning and communicate them accurately, Köstenberger said.

“If we believe that God inspired the actual Hebrew and Greek words that we have,” Plummer said, “are we going to be content to read those in translation?

While “we have good translations,” knowing biblical languages yet reading Scripture without using them “is like kissing your bride through the veil,” Plummer said, quoting the words of a Hebrew poet.

“Knowing Hebrew and Greek goes a long way toward helping us become more effective stewards of the Gospel with which God has entrusted us,” he wrote last year.

Take, for example, Philemon 1:6. In both the New International Version (1984 edition) and English Standard Version, the passage speaks of “the sharing of your faith.” Plummer said such translations have led some churches to use the verse incorrectly, though with good intentions — as a banner for their evangelism initiatives. Such an understanding of Philemon 1:6 is an example of finding the “right doctrine” in the “wrong text.”

“The book of Philemon,” Plummer explained, “is not about evangelism. It’s about forgiveness and reconciliation and brotherhood within the Christian community.” While “sharing” is not in itself a bad translation for the Greek word used in verse 6 (koinônia), “there are different kinds of ‘sharing,’ and the ‘sharing’ that is spoken of here is sharing life together in the community of God, sharing life as brothers and sisters, forgiving each other, bearing each other’s burdens.”

“The power,” Plummer added, “is in the Word of God — not in what we think it says, but what it really says.”

One proponent of using Greek in sermon preparation is Jerry Vines, retired pastor of First Baptist Church in Jacksonville, Fla., and co-author of “Power in the Pulpit.”

During more than 60 years in ministry, Vines has maintained a habit of studying Greek. And he says his passion for preaching the New Testament is greater because of it.

“It’s exciting,” he told BP. “It just comes alive for you. A person doesn’t have to know Greek to preach, of course. But, boy, there’s something special about going directly to the Greek text itself and getting it on your own instead of going through translators.”

Vines, who first studied Greek at Mercer University and at New Orleans Baptist Theological Seminary, said he spends the first 30 minutes in his study each morning by reading Greek grammars and interacting with the Greek New Testament. Every January, he reviews old Greek grammars, and he tries to read newly published grammars as they come out each year.

“There’s just so much good information out there now, and so many helps,” Vines said. “I’ve got a Greek vocabulary app. … I’m constantly going over vocabulary.”

To maintain and develop the ability to read Greek, Bible students first should be realistic about their understanding, Plummer said. Do they need a few refreshers on vocabulary, grammar and sy