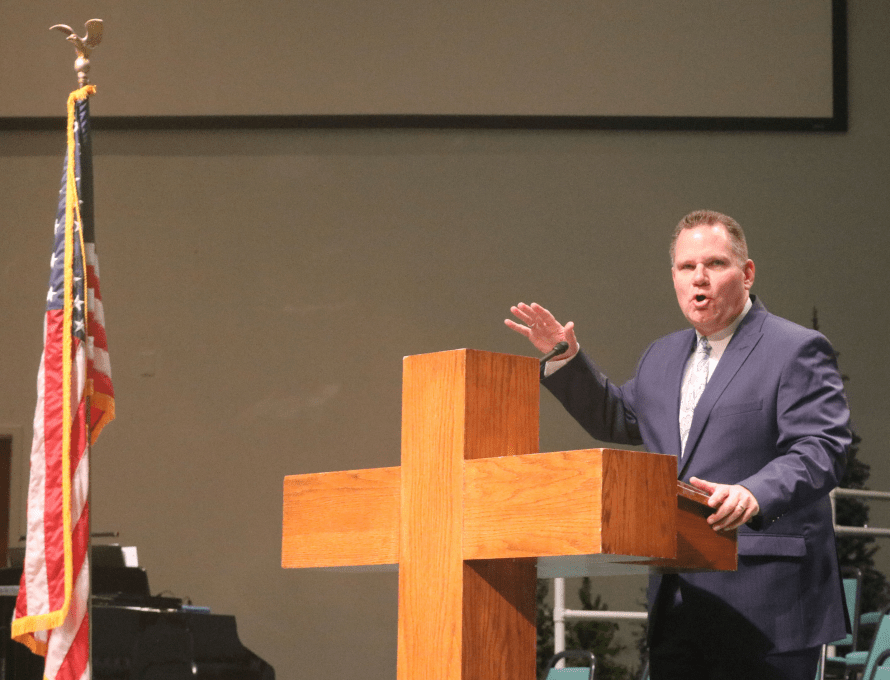 JEFFERSON CITY – Ken Parker, president of the Missouri Baptist Convention (MBC) and pastor of First Baptist,  Kearney, warned Missouri lawmakers of “the danger of lingering in or near potentially sinful scenarios” during the 12th annual prayer service at Concord Baptist Church here, Jan. 4.

Preaching from Genesis 19, Parker urged state officials and others in his audience not to follow the example of Lot, who “lingered” in the doomed city of Sodom after being warned by heavenly messengers to flee for safety. The consequences of Lot’s lingering was devastating: the death of his wife, drunkenness and incest.

Likewise, “lingering” near sin can have devastating effects for lawmakers. “It’s one small moment of lingering” that ends in a leaders downfall, he said, adding a comment he once heard from John Marshall, pastor, Second Baptist, Springfield: “Nobody reaches the extremes of depravity in a bound.”

The opening prayer was offered by Doug Austin, a layman from Bethany Baptist Church, Cape Girardeau, while the benediction was offered by John Battaglia, Missouri State Director, Capitol Commission.

The prayer service finds its biblical foundation in 1 Tim. 2:1-3: “First of all, then, I urge that entreaties and prayers, petitions and thanksgivings, be made on behalf of all men, for kings and all who are in authority, so that we may lead a tranquil and quiet life in all godliness and dignity. This is good and acceptable in the sight of God our Savior.”

After reading this passage during the prayer service, MBC executive director John Yeats, reminded Missouri officials that “the Word of God is the highest authority,” and that God’s Word commands Christians to pray for their leaders. He pledged that he and other Missouri Baptists would do exactly that.

Lawmakers were invited to a breakfast at Concord prior to the prayer service.

The service was co-sponsored by Concord Baptist Church and the MBC’s Christian Life Commission.