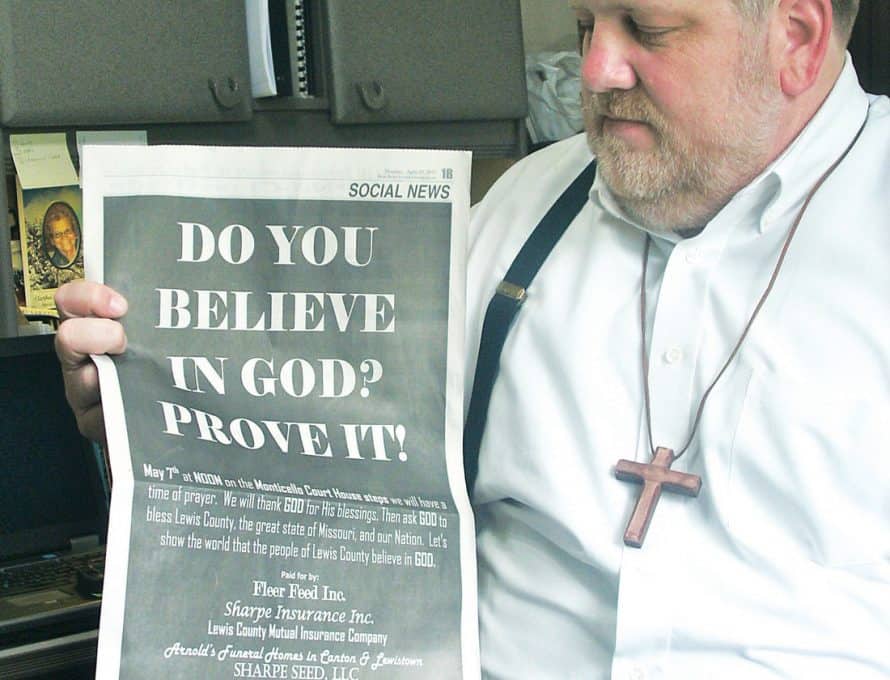 LEWISTOWN – Many pastors encouraged their flocks to pray during the National Day of Prayer, May 7. Ted Middleton, pastor of First Baptist Church here ratcheted up the call to prayer with a bold newspaper ad that challenged Christians’ faith.

A full-page ad in the April 23 edition of The Press-News Journal in Lewis County pointedly challenged local Christians to stand in faith.

“Do you believe in God? Prove it,” the ad reads. It then gives details of the time and place for Lewis County participation for the National Day of Prayer on the steps of the county courthouse in Monticello.

Half a dozen advertisers joined FBC Lewistown to sponsor the ad, although neither the church name nor Middleton’s name were listed. Middleton said that was done intentionally

“I wasn’t going to go that big,” Middleton said, explaining that at first he intended to run a half-page ad. But “every business I went to, I asked for $50 and they gave $100.”

For the National Day of Prayer event May 7, Middleton was one of two Missouri Baptist pastors and eight total people from several church affiliations who prayed for their communities, the state, and the nation. First Judicial Associate Circuit Judge Fred Westhoff led prayer during the event, which drew 75 people.

Some of those gathered on the courthouse steps wore benefit t-shirts for a young boy in Lewis County dealing with brain cancer.

“We prayed for him too,” Middleton said.

Ironically, Middleton originally wasn’t going to do much for the National Day of Prayer, except encourage church members to pray. But Missouri Baptist Convention Evangelism/Discipleship Strategist Mark Snowden challenged the church and Middleton to go to the courthouse and pray.

“I believe God desires to bring revival to America,” Middleton said, adding that he gave an invitation at the Monticello prayer event.

During the National Day of Prayer, other Baptists from the Mt. Salem/Wyaconda Southern Baptist Association gathered for prayer across northeast Missouri. The association includes Lewis, Knox, and Clark counties. National Day of Prayer events were also held in the Kahoka City Park in Clark County and at the Knox County Courthouse in Edina, with participation in these public events by Missouri Baptist pastors and lay members. Participants prayed for the nation, for elected leaders and for revival in churches.