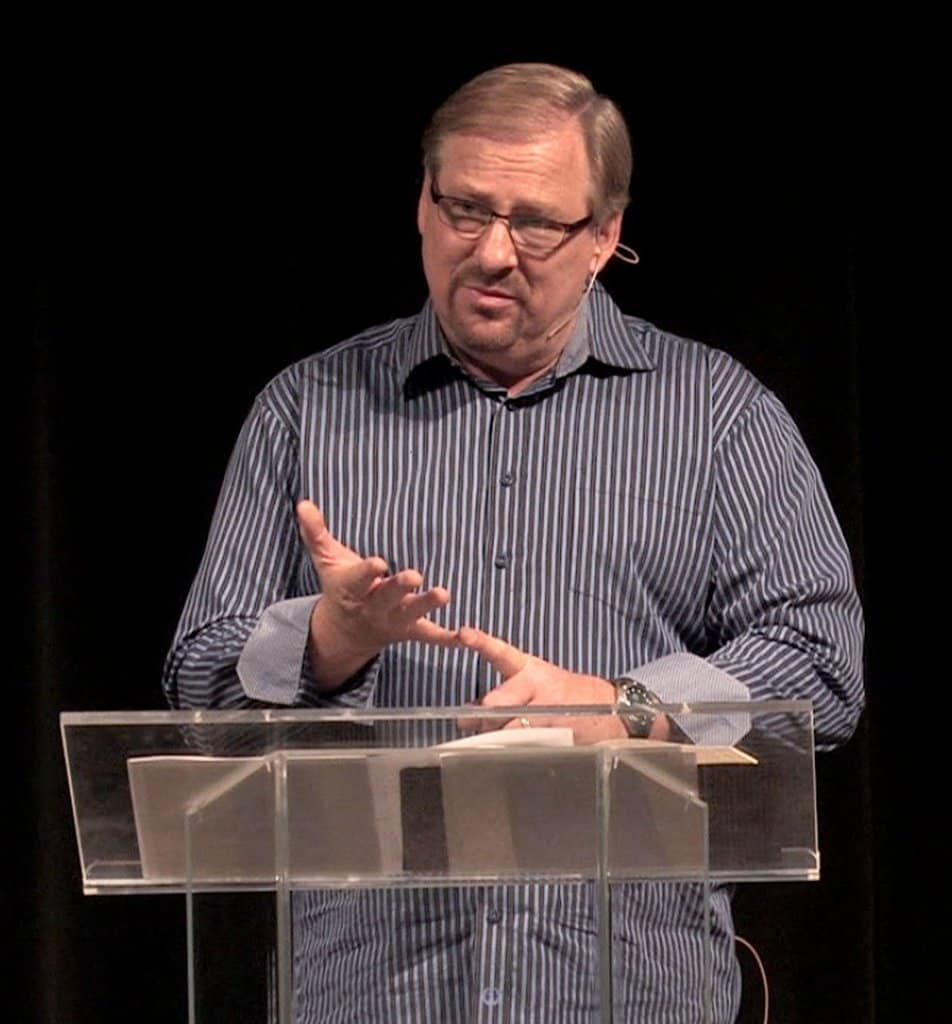 “The old Rick and Kay are gone. They’re never coming back,” Kay Warren wrote in a March 13 Facebook post with more than 3.2 million views and more than 10,000 supportive comments. “We will never be the same again. There is a new ‘normal.’ April 5, 2013 has permanently marked us. It will remain the grid we pass everything across for an indeterminate amount of time … maybe forever.”

Saddleback Pastor Rick Warren referenced the experience in encouraging viewers to attend services scheduled April 17 through Easter at the church’s 12 campuses in Southern California. The Warrens’ son Matthew killed himself at age 27 in his Mission Viejo, Calif., home after a lifetime of mental illness. He had spent the previous evening with his parents, giving no indication, they’ve said, of the impending suicide.

“During the past year I’ve often been asked, ‘How have you made it? How have you kept going in your pain?’ And I’ve often replied, ‘The answer is Easter,’” he said in a video posted to YouTube. “You see, the death, the burial and the resurrection of Jesus happened over three days. Friday was the day of suffering and pain and agony. Saturday was the day of doubt and confusion and misery. But Easter, that Sunday, was the day of hope and joy and victory. Here’s the fact of life. You will face these three days over and over.

“And when you do, you’ll find yourself asking, as I did, three fundamental questions,” the pastor said. “Number 1, what do I do in my days of pain? Two, how do I get through my days of doubt and confusion? Three, how do I get to the days of joy and victory? The answer is Easter.”

On Facebook, Kay Warren wrote of her difficulty in dealing with those who have expressed expectations that she should have been able to put the suicide behind her.

“As the one-year anniversary of Matthew’s death approaches, I have been shocked by some subtle and not-so-subtle comments indicating that perhaps I should be ready to ‘move on,’” she wrote.

While thousands offered ‘utterly amazing support’ through prayer and an ‘unbelievable volume of cards, letters, emails, texts, phone calls, and gifts,” she wrote, many seemed to wonder when things would return to normal.

“Because these comments from well-meaning folks wounded me so deeply, I doubted myself and thought perhaps I really am not grieving ‘well’ (whatever that means). I wondered if I was being overly sensitive – so I checked with parents who have lost children to see if my experience was unique. Far from it, I discovered.”

In an April 7 follow-up post, Warren thanked readers for their supportive comments.

“I don’t know how to interpret the volume of response other than to say it confirms what I suspected,” she wrote. “Grief is a long, arduous, slow process and it deserves to be respected and supported, not minimized and condemned.”

The responses comforted Warren, she wrote, but also broke her heart that so many are experiencing similar pain.

“So many of you have said, ‘This is my story too; you’ve put into words what I feel.’ You’ve told me about your sons and daughters, mothers and fathers, brothers and sisters, best friends, grandparents, cousins, neighbors and co-workers and how their deaths created such a well of pain and grief in your hearts; how the grief remains fresh and raw, and how much you wish ‘comforters’ had been more sensitive to your grief.”

Saddleback hosted March 28 the seminar “The Gathering on Mental Health and the Church,” with speakers including interdenominational clergy, mental health professionals and educators, including Eric Johnson, professor of pastoral care at The Southern Baptist Theological Seminary in Louisville, Ky., and Charles Hannaford, a practicing psychologist and adjunct professor of psychology at Southeastern Baptist Theological Seminary in Wake Forest, N.C.

The seminar was designed to mobilize the church on behalf of those living with mental illness, equip lay and pastoral leadership to minister to those affected, and stand side-by-side with those who suffer. At least half of the 3,000 registered for the conference had a family member living with a mental illness, Kay Warren said during the 5th plenary session.

She compared her son’s suicide, and God’s restoration, to the Ezekiel 36 story of God’s promise to deliver the Israelites from Babylonian captivity.

“I don’t know for sure how God is going to take the calamity of my son’s mental illness and his death and use it victoriously; it’s only been a year,” she said in a video of the seminar posted on YouTube. “But what I am certain of is this. God’s love is still working.”

“I believe God wants us to spread this word. God is not helpless among the ruins,” she said. “Matthew too is already experiencing the ruins being rebuilt in his life. He has already experienced the complete restoration. And if you were to use the Scriptural metaphor from Ezekiel 36, the fields have begun to bear fruit again. The cities have been rebuilt and they’re fortified and it’s more inhabited.

“His life is better than it has ever been for a single day in this lifetime and all of God’s promises to him have come true. And I thought to myself, I can go on.”

The Southern Baptist Convention (SBC) Executive Committee, at its February, 2014 meeting, voted to “continue to seek ways to work in cooperation with SBC entities and others to address the severe challenges imposed by mental illness.”

Page authored the 2013 book, Melissa: A Father’s Lessons from a Daughter’s Suicide, chronicling his daughter’s 2009 suicide and offering hope to those in despair. ν