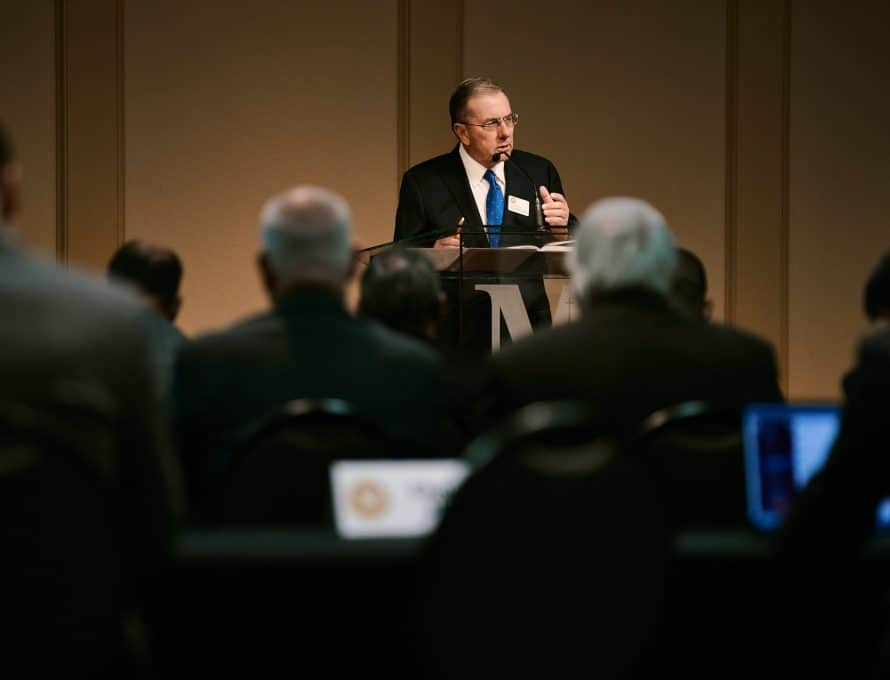 KANSAS CITY (MBTS) – Midwestern Seminary Trustees gathered on April 4-5 to receive an array of seminary updates, to celebrate the launch of the Global Campus, and to approve several matters of key institutional business, including the election of historian Thomas S. Kidd.

During his President’s Report, Jason Allen reflected on God’s faithfulness to Midwestern Seminary. “We have a precious stewardship,” he expressed, “including students from all 50 states and from more than 60 countries.”

The Global Campus is designed for God-called men and women serving in a unique kingdom assignment that currently precludes them from pursuing residential studies.

As Allen stated, “Midwestern Seminary and Spurgeon College exists for the church everywhere it gathers and for the kingdom everywhere Christ reigns.”

He continued, “That’s why we’re excited to introduce the Global Campus. Wherever you are, wherever you serve, you can study here as of today.”

With ten new start dates every year, contextualized assignments in each class, and a variety of flexible class formats, the Global Campus offers dozens of degrees available fully online at the Bachelor’s, Master’s, and Doctoral levels.

Wherever students are called, they can now complete any of Midwestern Seminary’s degree programs however they can: completely online, live over video, attending an event, or in their church.

Starting this fall, students will be able to enroll in the brand-new online courses, which feature high-impact video lessons, contextualized ministry assignments, and digital resources from Midwestern Seminary’s faculty. Learn more at mbts.edu/global.

In recommendations from the Academic Committee, the trustees elected historian Thomas S. Kidd as research professor of church history. After serving at Midwestern Seminary as a visiting professor since 2019, Kidd will transition to the full-time residential role in the fall of 2022. Previously, he served as the distinguished professor of history and James Vardaman Endowed Professor of History at Baylor University.

Provost Jason Duesing said of Kidd, “I am eager for both future pastors and scholars to study with him. I can think of no one else currently writing and researching in American history that would be a better complement to our academic programs and our vision of pursuing scholarship for the church than Dr. Kidd.”

Also commenting on Dr. Kidd, Allen added, “he is one of evangelicalism’s finest church historians, and we are confident that he will have an incredible impact on our students and our broader work at Midwestern Seminary and Spurgeon College.”

Trustees also approved the institutional budget, demonstrating a 6% growth from last year’s budget of $29.808 million to this year’s budget of $31.728 million. The new budget includes a 3% cost of living raise for all Midwestern Seminary employees. Trustees celebrated this news, including an updated rate for tuition and fees, while also recognizing the faithful institutional stewardship required for the growth.

Reflecting on stewardship and God’s faithfulness, Allen stated, “When one surveys the current landscape of higher education, it does not take long to see that budgetary cuts are prolific and increasing. By God’s grace, we have sought to be wise stewards the past several years to increase our strength through the recent uncertainty caused by the pandemic. Our team has worked hard, God has been faithful, so it is with great joy and thankfulness that we release our updated budget today.”