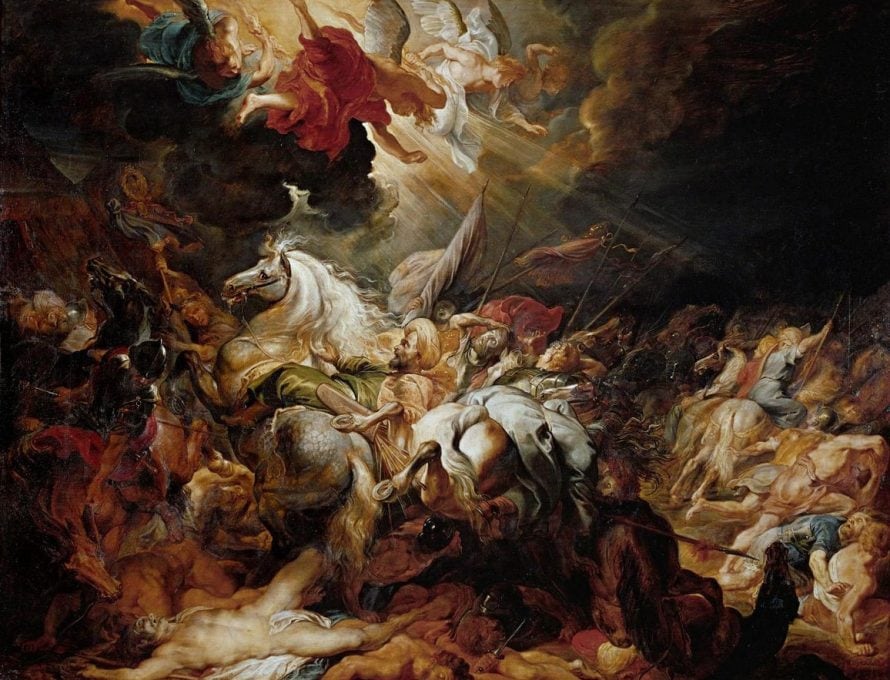 "The Defeat of Sennacherib," painted by Peter Paul Rubens between 1612 and 1614 (Image courtesy of Wikipedia).

And the widows of Ashur are loud in their wail,
And the idols are broke in the temple of Baal;
And the might of the Gentile, unsmote by the sword,
Hath melted like snow in the glance of the Lord!
– Lord Byron (George Gordon),
from “The Destruction of Sennacherib”

In the year 701 B.C., the Assyrian army under its king Sennacherib attacked the fortified cities of Judah and lay siege to Jerusalem. For some two centuries, the neo-Assyrian empire had been a force to reckon with in the ancient world, and their power had waxed great especially in the decades prior to Assyria’s attack on Judah. Nearly 20 years earlier, in 722 B.C., Judah’s northern neighbor, Israel, was swept away by the Assyrian might, and its people were scattered throughout the empire.

Now besieged, King Hezekiah and the people of Judah were forced to hear the taunts of Sennacherib’s messengers, recorded in Isaiah 36: “Tell Hezekiah: The great king, the king of Assyria, says this: What are you relying on?”

“You think mere words are strategy and strength for war,” the Assyrian king’s messengers added. “Who are you now relying on that you have rebelled against me? Look, you are relying on Egypt, that splintered reed of a staff that will pierce the hand of anyone who grabs it and leans on it. This is how Pharaoh king of Egypt is to all who rely on him. Suppose you say to me, ‘We rely on the Lord our God.’ Isn’t he the one whose high places and altars Hezekiah has removed, saying to Judah and Jerusalem, ‘You are to worship at this altar’?

“Now make a deal with my master, the king of Assyria. I’ll give you two thousand horses if you’re able to supply riders for them! How then can you drive back a single officer among the least of my master’s servants? How can you rely on Egypt for chariots and horsemen? Have I attacked this land to destroy it without the Lord’s approval? The Lord said to me, ‘Attack this land and destroy it.’” (Isaiah 36:4-10)

After hearing these words, Hezekiah rent his clothes and cried out to God. In short time, God answered by sending some relief, but the Assyrian king once again threatened the people of Jerusalem – this time, in a letter to Hezekiah: ‘Don’t let your God, on whom you rely, deceive you by promising that Jerusalem won’t be handed over to the king of Assyria” (Isaiah 37:10).

Hezekiah read the letter and, in response, “went up to the Lord’s temple and spread it out before the Lord” (vs. 37:14). Then he prayed. As mentioned already, the Assyrian messengers had asked the people of Jerusalem, “What are you relying on?” And Sennacherib’s letter warned Hezekiah not to trust “your God, on whom you rely.” But, as his prayer shows us, Hezekiah knew exactly the God on whom he relied. In fact, in his prayer, he mentions several key phrases that describe the Lord in whom he placed his confidence:

The Lord of Armies, the only God of all kingdoms,
the Maker of heaven & earth

Hezekiah calls God the “Lord of Armies” (elsewhere translated as the “Lord of Hosts”). As the commentator Matthew Henry writes, God is “the Lord of hosts, of all hosts, of the hosts of Israel, to animate him, of the hosts of their enemies, to dispirit and restrain them.” By my rough estimation, Isaiah ascribes to God the name, “Lord of Armies,” nearly 60 times at least; both the Greek Septuagint (LXX) and the New Testament translate the phrase as “God Almighty” (e.g., Rom 9:29). The Lord of Armies sets Himself against all who are arrogant and self-exalted:

Not only is God the Lord over Judah and Assyria’s armies, but he also has at his command an unseen angelic host (2 Kings 6:16-17) and employs the forces of nature to provide victory for His people (Joshua 10:11-14). No power in heaven or on earth can challenge His might. To borrow a phrase from John Milton, who dares to “defy the Omnipotent to arms”?

The prophet adds, in Isaiah 40, that no graven image or idol can compare to the almighty Creator.

“‘To whom will you compare me, or who is my equal?’ asks the Holy One. Look up and see! Who created these? He brings out the stars by number; he calls all of them by name. Because of His great power and strength, not one of them is missing. … The Lord is the everlasting God, the Creator of the whole earth.” (Isaiah 40:25-26,28).

Moreover, in his prayer to the Lord, Hezekiah recognizes these truths, calling upon the God as the one who “made the heavens and the earth.”

Sennacherib with his Assyrian army exalted himself above the Lord God Almighty, who created and reigns over all heaven and earth, but he would soon learn that the Lord God of Hosts is the one and only God over every human authority.

‘God of Israel, enthroned between the cherubim’

Not only is God the majestic Lord of Hosts, but He is also a personal God, a God faithful to His covenant promises. He is present with His people. In short, He is the “God of Israel,” as Hezekiah says. He is the one who, by His grace, called out to Abraham, Isaac and Jacob (a.k.a, Israel), promising them descendants that would be blessed and, in turn, that would be a blessing to all nations. He preserved their many descendants, redeeming them by His mighty strength out of slavery in the land of Egypt and giving them the land He had promised to their forefathers. And, in time, the seed of Israel – Jesus Christ – would bless all nations, redeeming them by His blood and grafting them into the covenant family of God.

Likewise, He is the God “enthroned between the cherubim.” He is the majestic God who reigns in the midst of His people. According to 1 Kings 6, the inner sanctuary inside Solomon’s temple contained two cherubim of olive wood, overlaid with gold. Each cherub stood 15-feet high and had a 15-foot wingspan. Between these cherubim was placed the Ark of the Covenant—the sign of God’s presence among His people and a testimony to His covenant with them.

When King David first proposed the building of the Jerusalem temple as a house for the Lord, God in turn promised to build a house for David – a dynasty that would never fail. He fulfilled this promise in Christ Jesus, the son of David and Son of God. Moreover, because of Christ’s atoning death and resurrection, the Spirit of the Lord now dwells within believers and reigns over His church today. God almighty is with us!

The God who listens, see and saves

Finally, Hezekiah calls upon the Lord as the God who listens, sees and saves:

“Listen closely, Lord, and hear; open your eyes, Lord, and see. Hear all the words that Sennacherib has sent to mock the living God…. Now, Lord our God, save us from his power so that all the kingdoms of the earth may know that you, Lord, are God—you alone.”

Indeed, God heard Hezekiah’s prayer, and answered. The Lord’s angel “struck down one hundred eighty-five thousand in the camp of the Assyrians” (Isaiah 37:36-38). As the poet Lord Byron (George Gordon) recounted centuries later, the lofty might of king Sennacherib and his armies “melted like snow in the glance of the Lord!”