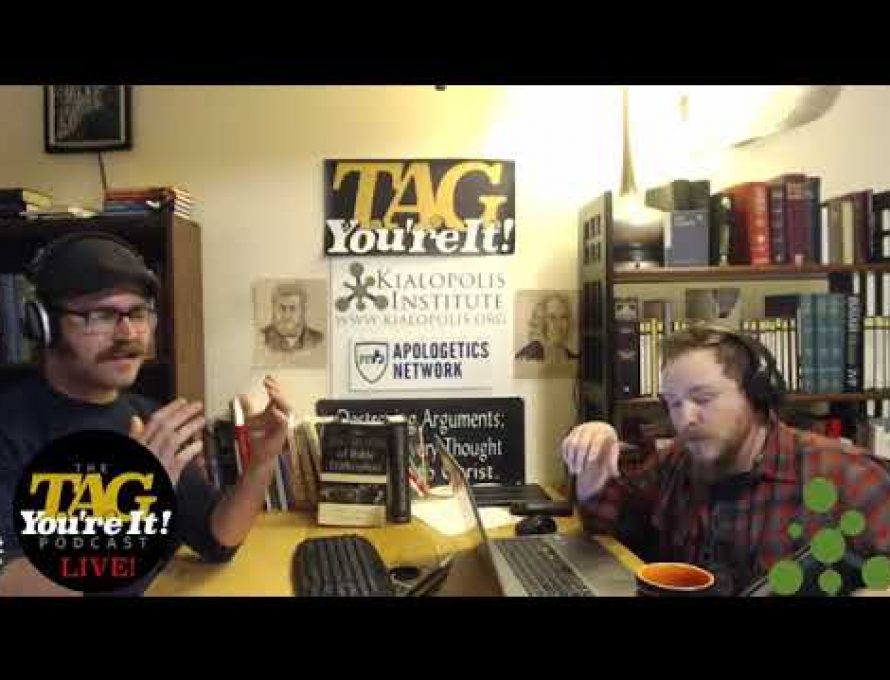 BUFFALO – After several hundred episodes and many thousands of hours of debates, defenses, and discussions about God, the T.A.G. You’re It! Podcast, a weekly show promoting Christian apologetics—or defenses for the Gospel—is celebrating five years of online information. One of its co-hosts says, “It’s been a blast!”

David Guy Van Bebber Jr. launched the program in 2017 with Adam “Ray Ray” Cochrun. The online show allows listeners to review an episode when it’s convenient and listen at their own pace on a smartphone, computer, or laptop with a podcast app or internet browser.

T.A.G. stands for Transcendental Argument for God, which both men explain as starting with the belief that nothing can be known or proven without first beginning with the triune God of the Bible.  “You’re It” refers to tossing the argument back to another debater after a point has been made.

“There are two of us and in a way we also “tag” each other in on the microphone when working to destroy arguments,” Van Bebber says. He and Cochrun say the podcast uses “a tool God gave us, the Scripture, to go on the offensive and defensive in proclaiming the gospel.”

Apologetics is from the Greek word apologia, meaning defense, and is the study and practice of offering an argument for God. Though apologetics may seem like an academic exercise, both men say all believers are apologists and practice apologetics whether they realize it or not.

“You can’t get away from being a Christian and not being an apologist in some sense,” Van Bebber, says. “Every time you declare what Christ has done for you, you are doing apologetics.”

The T.A.G.! You’re It Podcast offers more in-depth examination of issues and arguments than can be done in a typical church setting, the men say. Each week they produce about two hours of content.

“Dave and I wanted to take time to talk about theology and methodology and how to apply those to our current cultural context and encourage others—as (the apostle) Peter encouraged—to stand firm in the true grace of God in the Gospel,” Cochrun says.

“We are constantly looking for (topics) where the suppression of the truth in unrighteousness is popping up in the lives of unbelievers,” Cochrun says.

Van Bebber is pastor of First Baptist Buffalo, northeast of Springfield, and a communications professor at Spurgeon College at Midwestern Baptist Theological Seminary. He became interested in apologetics through his academic studies.

Cochrun is a barber by trade and layperson at Redeemer Church in Springfield. He describes himself as a “homeschooled apologist” from self-study in the history and methods of apologetics.

The two first met through a debate at Missouri State University. Van Bebber had been a  member of the Missouri Baptist Apologetics Network (MBAN) for about a year and was scheduled to debate the founder of a satirical organization opposed to the promotion of intelligent design and creationism.

“The Pathway covered the lead-up to the debate and Adam saw it,” Van Bebber remembers. “We interacted on Facebook and then met up to discuss the network. I encouraged Adam to join…and shared with him my idea for producing more apologetics. About a week after the debate, Adam and I started the podcast.”

The T.A.G. You’re It! Podcast can be found on Facebook at https://www.facebook.com/TAGYoureItPod every Monday at 6pm.  The program can also be found on multiple podcast platforms, including Apple Podcasts, Spotify, and I Heart Radio. Previous episodes are available on the Facebook page and YouTube.

Both are members of MBAN, an MBC agency. MBAN is composed of church leaders committed to defending the Christian faith, and to helping believers share their faith more effectively. MBAN members are available to churches for apologetic teaching and study.