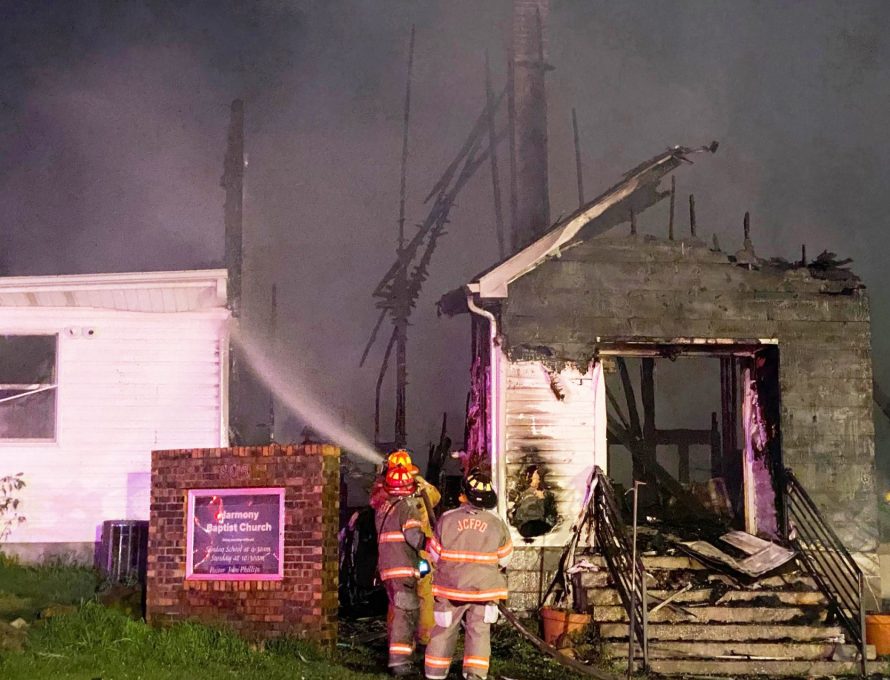 LEETON – The Harmony Baptist Church in rural Johnson County was destroyed by a fire on the evening of Sunday, July 5.  The fire is of suspicious origin and fire officials from the offices of the Missouri State Fire Marshall and the U.S. Bureau of Alcohol, Tobacco, Firearms and Explosives (ATF) are investigating the cause and have reason to believe it is the work of an arsonist.  They have not identified any suspect at present.

Pastor John Phillips said a car was seen leaving the church property about 11:05 PM that Sunday evening.  At 11:22 PM a church security alarm was activated showing an open door. A few minutes later the security system indicated a fire.  By the time church members and the local fire department arrived at approximately 11:40 PM the southwest corner of the building was engulfed in flames.

Firefighters from the Johnson County Fire Protection District and several other area fire departments battled the blaze, but the building is believed to be a total loss.  They reported over 50,000 gallons of water were hauled to the scene to extinguish the fire.

The pastor said they have not had any threats or noticed anything suspicious, and they are baffled as to the motive if it proves to be arson.

He said the original part of the building was built in 1881 and had been moved to the current location from about a mile away many years ago.  There have been two additions made to the building in the past 40 years, the most recent in 1998.

Ron Carmack, a deacon of the church, said that bystanders gathering the next day looked at the rough hewn wooden timbers from the original church building and could see the shape of a cross pointing up from the burned out building. He said that gives the church members hope.

Phillips said they will hold services outdoors on the parking lot on Sunday, July 12.

“We want the community to see that we are alive.  We will rise up from the ashes.  We are a small church and everyone from the church and community was there for us throughout the night and the next day,” said Phillips.

He added, “We watched the sunrise the next morning, as the firemen were putting out hot spots and we knew God was still on His throne, ”

Carmack said ,“I believe it is His will for us to rebuild. We need to stay strong in the faith.  We have been ministering here for 130 or more years.  We need to carry on. (We are) not supposed to stop.”

John Brittain, director of missions for West Central Baptist Association, said he will be with the church to assist with worship on Sunday and is bringing his guitar.  Another church in the association will offer their portable sound system and keyboard.

The association has started a relief fund to help the beleaguered church.  Brittain said he is encouraging pastors to call the pastor and pray for the congregation.  He said the Missouri Baptist Convention has also called to offer assistance.

Deacon Carmack said, “We will seek God’s will in all the whole matter.”  They feel optimistic that the church will survive this crisis and come out stronger.