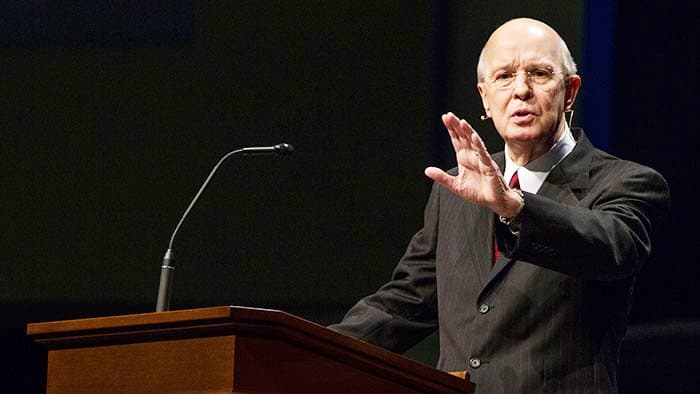 When did you realize the Southern Baptist Convention had a theological problem with liberalism?

“I was fortunate to be brought up in a very strong, Bible-believing evangelistic church. And when I was called to preach, the pastor of the church – whom I admired greatly – said that I should go to one of our Baptist schools (Mercer University in Macon, Ga.). In my first class actually, I became aware that there was something awry here. The first class I went into was a New Testament class, and the professor said, ‘Any man who says that the Bible is not filled with contradictions is a fool.’ And that’s the direct quote because it was so startling to me that I have never forgotten it. So, at that point in time, I went through a four year experience of total, thorough liberalism. I came to know in my first year of college that the Southern Baptist Convention had some major theological problems.”

And after that, did you go onto seminary? What was your experience there?

“Yes, I did. I don’t want to say that there were no positives about Mercer University. I received a very, very good education there, and I’m grateful for it. But in the Bible area – they called it the School of Christianity – I think that’s where the problems were. But actually, one of the primary reasons for my going to New Orleans (Baptist Theological) Seminary is that some of my liberal professors mockingly called it, ‘that prayer meeting school.’ And so I figured that’s where I needed to go.

“(At New Orleans Seminary), there might have been one or two professors that were in question, but for the most part, the professors there and the whole atmosphere of the school was decidedly conservative – which also said to me that not all Southern Baptist institutions were problematic at the time. So, you know, there was the good and the bad at that time, but there was enough liberalism that I knew it was a problem.

“Actually, many of my professors at New Orleans Seminary were aware there was a problem, as well. One of them, Dr. Gray Allison, just recently passed away. He was our evangelism professor and went on to found (the conservative) Mid-America Seminary as a direct result of the liberalism in the convention. So men like Dr. Allison and others had the same concerns I had experienced.”

Were you ever part of the conservative Pressler-Patterson coalition as that was developing in the late 60s and throughout the 70s?

“Well, I was not in the beginning, but as the situation developed I guess you could say I became a part of it, because I was certainly in sympathy with what they were trying to do.

“I go into all of this (in my autobiography), but actually what was going on … is that there were many of us out here who had a tune going on in our minds and hearts, and Patterson and Pressler came along, and they put the words to the music.

“We all became a part – not that we agreed with everything, but we all had a united goal and intention. And that was to return the Southern Baptist Convention to its conservative roots.”

Of course, you were with Paige Patterson in Houston on that night in 1979 when you approached Adrian Rogers about being nominated as the Southern Baptist Convention President. And his election the next day really began the Conservative Resurgence in the SBC. Tell me about that?

“Actually what transpired there was that, in 1977, Dr. Rogers nominated me for president of the Convention, and I lost in a run-off to Jimmy Allen. So it appeared that I would be the candidate again in 1979. But the closer it came to the time, the more uneasy I became about the matter. And it became apparent to me that I was not the one the Lord wanted to run. And so I saw Dr. Patterson – I guess it was 10 o’clock or after that night – and told him that I just didn’t feel like I’m supposed to run.

“I think maybe that night, in his message, (W.A. Criswell) indicated that we were there to elect Adrian Rogers president of the convention. And so that really finalized in my mind that I was not the candidate, that Rogers was. And of course in those years, we felt like Criswell was the fourth person in the Trinity. I mean, whatever Dr. Criswell said, that was it. So Dr. Patterson and I went up to see Adrian. Joyce, his wife, was there, and you know the rest of the story.”

What was the atmosphere like at the SBC when Rogers was elected?

“When Dr. Rogers was elected, there was a momentary stunned silence in the room, and then it dawned on everybody that he had won. Then a celebration broke out like you wouldn’t believe. I will never forget the emotions of that day. It was just unbelievable, astonishing, astounding that it actually had happened. And I think he won on the first ballot, didn’t he? Without a runoff?

What lessons should Southern Baptists learn from the SBC’s “Battle for the Bible”?

“And then, I think, another thing they’ll have to do is to learn how to take their stand in such a way that it does not become personal animosity. I tried to always separate my convictions and my activities in terms of the liberalism in the convention from my personal friendship with a number of people who would be classified as moderate and liberal. I tried to always conduct myself with the Christian grace and charity. And I think we have lost some of that today. The level of disrespect today is certainly a concern. Though we vigorously argue and defend our convictions, we really need to learn again how to do it with civility. I don’t find a lot of civility anywhere in our society. It’s not just been the convention, it’s in the nation and everywhere else.”

Tell me about your favorite memories from the years you were involved with the Conservative Resurgence.

“I think one of the things that was really favorable to me was to see young preachers coming along who believed the Bible and were committed to preaching the Bible, and also who believed strongly in evangelism and in winning the lost to Christ. Also, the emphasis on holy living and a separated life from the things of the world – that was encouraging to me in those years.”

I would say to them, your number one priority needs to be your devotional life – that time daily when you read the Word of God and when you pray. Get that close fellowship with God in place at the beginning of every day. And from that, go out and live your life and conduct your ministry. That’s the key to the ministry.

“I have talked, unfortunately, with more than one preacher through the years who has fallen, and almost without exception, they said that they didn’t have that devotional time with God every day.”