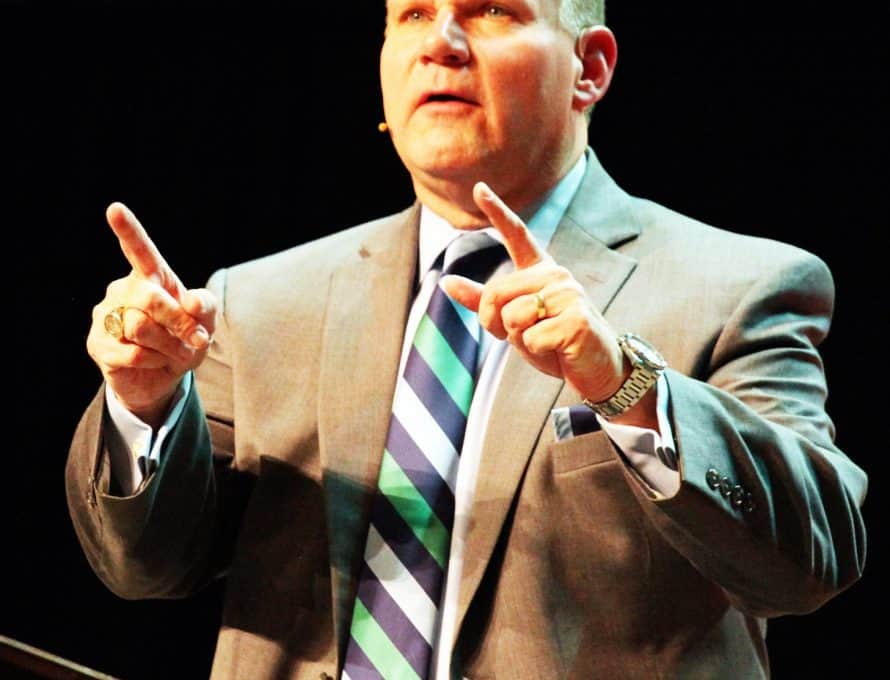 SPRINGFIELD – Holding hands and with arms lifted high, Missouri Baptist messengers prayed together after Missouri Baptist Convention President Ken Parker delivered his address at the MBC annual meeting here, Oct. 22. Their actions were in response to Parker’s appeal. Speaking on the annual meeting’s theme, “Steady,” Parker encouraged Missouri Baptists to hold one another up in love as they seek to transform lives and communities through the gospel.

Such cooperation, Parker said, is necessary because conflict is inevitable.

“Obstacles and attacks will come, even when we’re fulfilling our God-given destiny,” Parker said. Supporting the life of the unborn, defending marriage as the union of a man and woman, proclaiming a gospel of salvation through Christ alone – these will bring criticism in the current culture. But, Parker urged his listeners, “Wear the criticism like a badge of honor.”

Obstacles came to God’s people in Exodus 17:8-16, when they were attacked by the Amalekites. But, as God so often does, He used “people to fight the battles,” Parker said. “God oftentimes answers prayers through the actions of His people.”

“When God, in His kind providence, chose to rescue this denomination from theological liberalism, do you know how he did it? Through people,” Parker said. “Men like Dr. Adrian Rogers, Dr. Charles Stanley and Dr. W.A. Criswell, and men of their kind, jumped into the fray, oftentimes at great personal expense to rescue the Southern Baptist Convention from falling off the theological cliff.”

This history should be remembered, Parker added, for the same reason that his congregation at First Baptist Church, Kearney, regularly recites portions of the Baptist Faith and Message 2000: Namely, Missouri Baptists must never let themselves “be lulled into complacency.”

“Every church,” he said, “is only one off-the-rails pastor or one small group of ‘out-there’ people from becoming side-tracked.”

God not only uses people to fight, but also to “bring healing,” he added. “Stand when we should. Make peace when we can.”

Additionally, Parker said, the “difference between victory and defeat” is sometimes “the help we receive from others.” In Exodus 17, as the Israelites faced their battle, God commanded Moses to stand on a hill overlooking the battle and to raise his arms, with his staff in his hand. As long as his hands were lifted, the Israelites would succeed in battle. But, as is common with men and women of God, he couldn’t fulfill the task alone. After some time, Moses grew weary, and two men – Aaron and Hur – came to his aid. They stood on each side of him, holding his hands “steady until the sun went down” (vs. 12).

“Sometimes we just need a little help to remain steady,” Parker said, and there isn’t any shame in this. “Having others help is not a sign of weakness, but of humanity.”

After their victory against the Amalekites, Moses built an altar to the Lord as a testimony to His faithfulness. Likewise, Parker said, Missouri Baptists should “recite the victories,” because it fosters strength and perspective.

Finally, God’s victories in Exodus came because God’s people supported one another. “The people of God,” Parker said, “experienced the victory from God and the blessing of God because they held hands.”