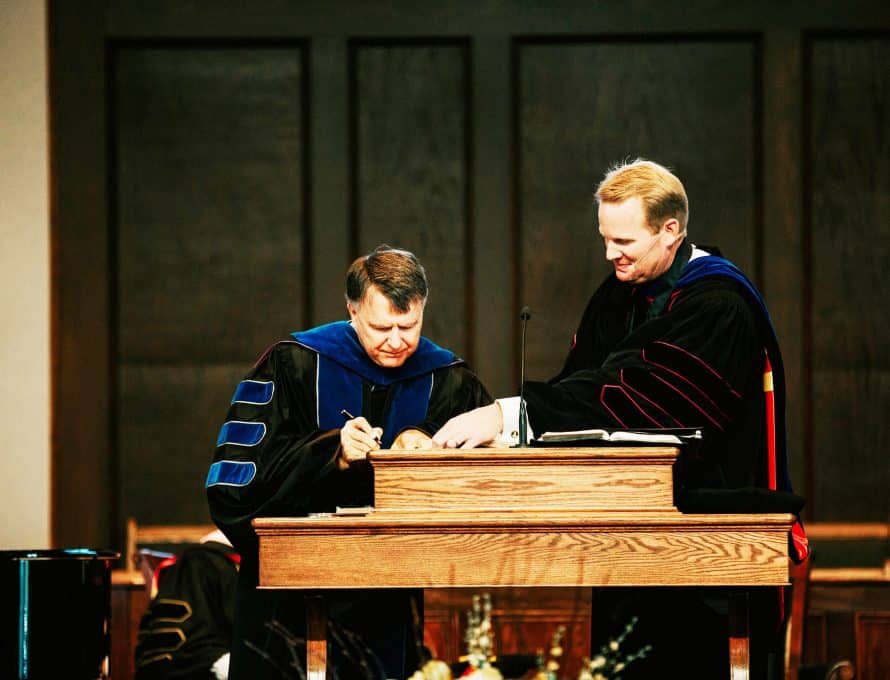 In addition to Allen’s message from James 1:19-25, the seminary’s newest faculty member, Andreas Köstenberger, signed the Articles of Faith. After convocation, the Midwestern community honored the seminary’s first president, Millard Berquist, by dedicating the campus administrative wing in his name.

Allen, in his convocation message, warned that being a minister of the Gospel is to “Play with Dangerous Things.”

In explaining that each minister must receive God’s Word with careful reflection, Allen noted how this is typified in James’ words in chapter 1, verse 21.

“To live the Christian life is to be involved in a collision of interests,” he said. “The Word, the Spirit, the ministry and the forces of light all come at us in one way, and the other would be things of darkness, filthiness and the vestiges of wickedness that unfortunately remain.

“Of this collision, James would say, ‘You engage this collision by humbling yourselves — receiving, digesting the Word implanted.’ The picture we get here is that spiritual growth and the preaching and teaching of God’s Word is a deep work.”

Once the Word is received, Allen said, one must act on it with intentional obedience.

A minister’s obedience shouldn’t come from an understanding that it earns salvation or keeps one’s salvation, Allen said, or that it gains a favorable standing in the sight of our Lord.

There is a danger ministers and other Christians face in being self-deluded about hearing or preaching the Word of God but having no interest or desire in applying it, Allen said. This can be avoided, however, by having a willingness to reflect protractedly, thoroughly, and by intentionally obeying God’s Word.

“As we begin a new academic year and all of the possibility it portends,” Allen said, “we dare not be the type of people who could hear, teach or preach the Word without any intent to sincerely reflect upon or to intentionally obey it.”

Also during convocation, Midwestern’s newest faculty member, Köstenberger, signed the Articles of Faith in promising adherence to the seminary’s confessional statements: the Baptist Faith & Message 2000, the Danvers Statement on Biblical Manhood & Womanhood; and the Chicago Statement on Biblical Inerrancy. Kostenberger is the 114th MBTS faculty member to sign the Articles of Faith.

Köstenberger, who came to Midwestern Seminary after 20 years at Southeastern Baptist Theological Seminary, will serve as research professor of New Testament and biblical theology and as director of a forthcoming Center for Biblical Studies. He was elected to the faculty during April’s trustee meeting.

Rounding out the day’s festivities was the dedication of the seminary’s administrative wing in honor of Millard Berquist, Midwestern’s first president who died in 1990. Before a crowd that included a number of Berquist’s family members, Allen unveiled a plaque commemorating the founding president’s service and efforts.

Allen reflected on stories he had read and heard about Berquist’s election as president as well as his vital role in property negotiation, assembling the original faculty, initial building projects and early school life at Midwestern.

Of Berquist, Allen said, “To found anything, whether it is a business, church or what would prove to be a major institution, is no small task. Dr. Berquist and his wife Gladys gave their lives to leading this institution, and that is a remarkable thing. We are grateful for their tremendous service to the seminary community and the Southern Baptist Convention in the earliest years of our school’s existence.

“In honoring Dr. Berquist’s extraordinary contribution toward these foundational elements of Midwestern Seminary — now 61 years after the institution was established — it is only fitting and right that on this August day, we dedicate this building — to now be known as Berquist Hall — after him.”

Berquist was elected by the trustees as president on Oct. 8, 1957. He presided for 15 years, retiring on July 31, 1972 but continuing administrative duties until February 1973 when his successor, Milton Ferguson, took office.

Berquist and his wife were married for 62 years; the couple had one daughter, Barbara.