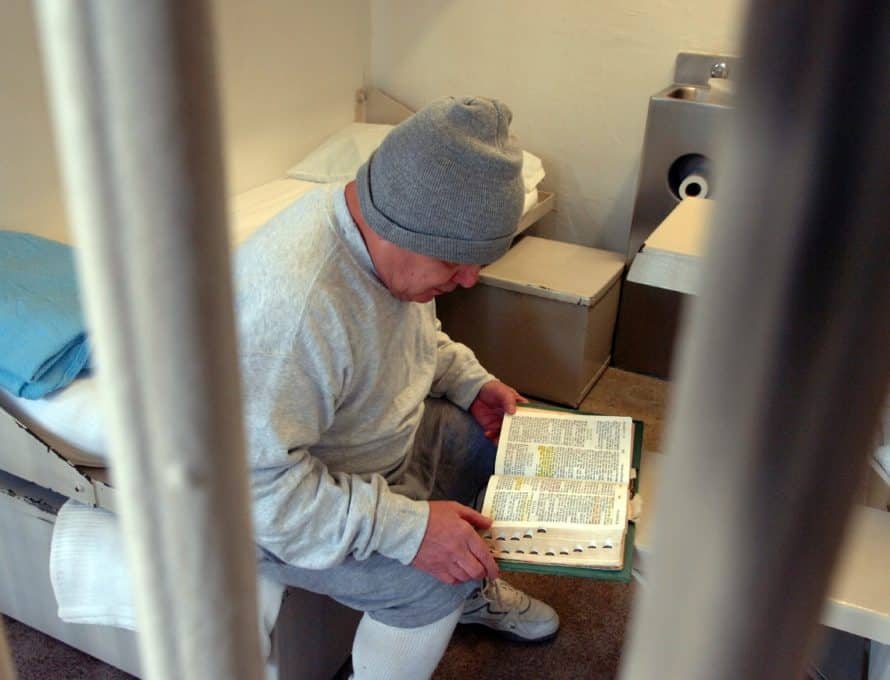 ANGOLA, La. - A death row inmate at the Louisiana State Penitentiary at Angola reads his Bible for hours every day, part of the sweep of faith that prison officials and New Orleans Baptist Theological Seminary have nurtured at the once-notorious prison. BP Photo by Robin Nelson

HANNIBAL – Education programs in prisons are usually aimed at giving someone a leg up once their time is served and they return to society at large to make a positive impact. A hard-earned associate’s or bachelor’s degree earned behind bars isn’t worth much if the inmate never gets released. But what if the goal is to use education to make a positive impact behind the prison walls?

It’s an idea that intrigues Hannibal-LaGrange University President, Anthony Allen. Though such a program is still hypothetical at this point, he said he’s had discussions about bringing education with a Christian worldview to those serving time in Missouri.

Despite many hurdles that would need to be overcome, Allen said “we’re open to it and feel led to consider it” and that HLGU leaders have spoken with Department of Corrections officials about the possibility.

One of the elements that might be on the table is a degree in Christian studies.

“The goal is to equip and train folks who could be put in other prisons to lead other ministries,” he said. “From the prison’s standpoint, what they’ve found is that if they have an active Christian ministry inside led by prisoners, it changes peoples’ lives and the entire culture.”

One major roadblock is funding. Prisoners aren’t eligible for any federal financial aid, so HLGU would need to find its own funding to covers the costs.

“We’d have to do some fundraising,” Allen said. “It’s a not a money-making scheme; it’s pure ministry.”

That ministry is an idea that has worked in other states, sometimes with dramatic results. The go-to example is what took place at what has been called the “Alcatraz of the South… the worst of the worst:” the maximum-security Louisiana State Penitentiary in Angola, La. The average prison sentence there tops 93 years, and that’s not counting those who have life sentences.

Burl Cain, the recently retired warden of the 6,300-inmate facility, gives an extension program through New Orleans Baptist Theological Seminary’s Leavell College some of the credit for providing an environment ripe for revival and reform in recent years. Beginning in 1995, the program began offering a bachelor of arts degree in Christian ministry and other non-credit certificate program with the aim of creating army of missionaries from within the prison’s own ranks. The implementation of the program coincides with marked decrease in inmate violence and upwards of 150 baptisms per year.

It’s also a church-planting strategy that would make the Apostle Paul – who spent his fare share of time in chains – smile. Other prison officials in Lousiana praise the work of dozens of the graduates who asked to transfer to other Louisiana prisons in order to plant new inmate-led congregations.

“What God has done in and through our inmate ministry training programs defies description,” Chuck Kelley, president of New Orleans Baptist Theological Seminary told Baptist Press. “It is a miracle of moral rehabilitation, demonstrating that Jesus has the power to work in any life. It is encouraging to see that word of what is happening is seeping into the popular culture.”

NOBTS now oversees educational programs at the Louisiana Correctional Institute for Women in St. Gabriel, the Mississippi State Penitentiary in Parchman and at Phillips State Prison in Buford, Ga. In 2011, Southwestern Baptist Theological Seminary launched a program at Darrington Prison in Rosharon, Texas, modeled in large part on the NOBTS Angola extension with more than 100 students enrolled at any given time.

In the case of both seminary programs, private donations support entire projects with no taxpayer money used for the program. Along with paying professors, generous donations provided furniture, computers, materials, and books for the library.