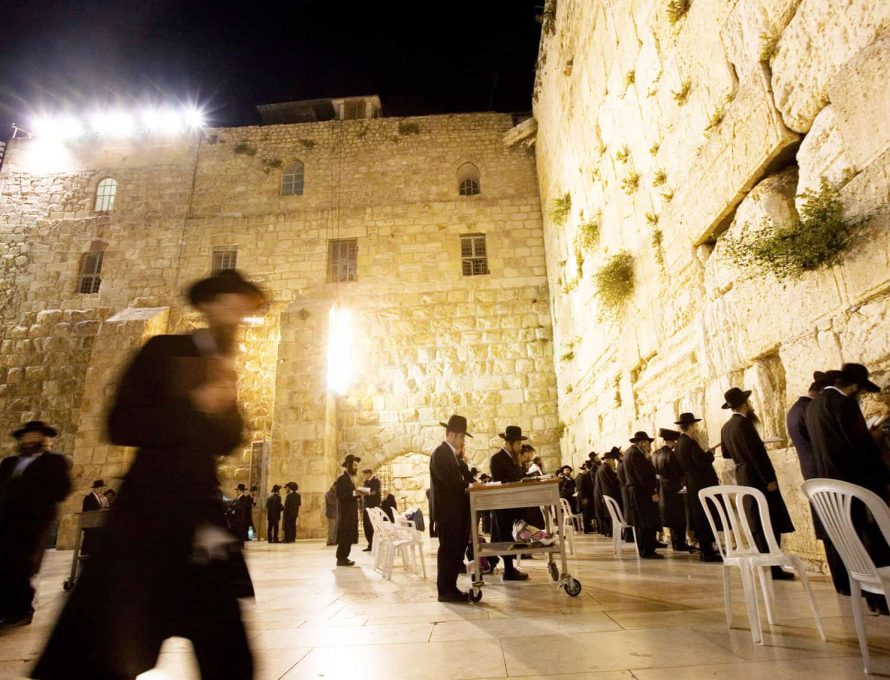 JERUSALEM – Worship at Jerusalem's Western Wall, to many Jews and Christians, is one of the evidences of fulfillment of prophecy that began with the founding of the state of Israel in 1948. Though Southern Baptists disagree about the place of ethnic Israel in the fulfillment of prophecy, they agree that Christians must pray for Israel and share Christ with the Jewish people. BP photo by Justin Veneman

Even standing alone, this Hebrew phrase for “the land of Israel” evokes a host of stories, images and promises from Scripture. But the phrase was particularly potent when, exactly 70 years ago on May 14, David Ben-Gurion – Israel’s first prime minister – read a declaration establishing a Jewish nation within the land of Israel for the first time in thousands of years.

“ERETZ-ISRAEL (the Land of Israel) was the birthplace of the Jewish people,” the declaration began. “Here their spiritual, religious and political identity was shaped. Here they first attained to statehood, created cultural values of national and universal significance and gave to the world the eternal Book of Books.”

On the same day in 1948, Missouri-born President Harry S. Truman led the United States to become the first nation to recognize the modern State of Israel. And since that time, many Americans – not least, Southern Baptists – have likewise recognized modern Israel’s legitimacy.

“We as Southern Baptists should have open arms to Israel,” Michael Fishback told The Pathway. An ordained rabbi, Fishback leads Beit Simcha Torah, a Messianic Jewish congregation in Stella, Mo., which is affiliated with the Southern Baptist Messianic Fellowship.

Like Fishback, many Southern Baptists throughout Missouri and across the United States have expressed support for Israel. Indeed, during their annual meeting in Indianapolis 10 years ago, Southern Baptists approved a resolution celebrating the 60th anniversary of Israel’s establishment as a modern nation. Then, meeting in St. Louis in 2016, Southern Baptist messengers once again expressed support for Israel, expressing their commitment to “bless Israel” and “to pray for God’s peace to rule in Jerusalem.” A year earlier, messengers to the Missouri Baptist Convention annual meeting, approved a resolution pledging prayer and denouncing anti-Semitism.

According to Craig Blaising, provost at Southwestern Baptist Theological Seminary, many Christians today see the 1948 establishment of modern Israel as “an act of God.”

“The reemergence of Israel as a nation after almost 2,000 years is truly remarkable,” Blaising wrote two years ago in the book, The New Christian Zionism: Fresh Perspectives on Israel and the Land (InterVarsity Press). “Not only did Israel become a nation recognized by other nations in 1948, but she has survived threats and wars to become a significant national power in the Middle East.”

Blaising believes that, at Christ’s return, God will fulfill His promise to redeem ethnic Israel and restore to them the promised land. Nevertheless, the establishment of modern Israel shouldn’t be mistaken for the “restoration of all things spoken by the prophets.”

“The consummation is still future,” he said. Yet God hasn’t forgotten his covenant with Israel, and God “is the one who brings them back into the land and bestows some measure of sovereignty on them.” Even though the 1948 restoration of a Jewish state wasn’t the culmination of God’s plan for Israel, one thing is clear, Blaising said: God was indeed at work in 1948, and His action “obligates Israel and all nations to know the Lord.” God is calling the Jewish people to repent and believe in the Lord Jesus as the true Messiah and only Savior.

Unlike Blaising, Michael Kuykendall – professor of New Testament at Gateway Seminary of the Southern Baptist Convention – believes that the multi-ethnic Church has replaced ethnic Israel as the people of God. He also believes that God’s Old Testament promise to give ethnic Israel a particular land is no longer in force.

“The gift of land to Abraham and his descendants was preparation for what God revealed through a group of people,” Kuykendall said. “But His plan was to reveal Himself to all humanity. Land was one means to that end, but not the end in itself. The climax of that process of history through the Israelites was the coming of Jesus the Messiah. Through Him, the Old Testament is ultimately fulfilled.”

Yet, like Blaising, Kuykendall urges Southern Baptists to pray for Israel and call the Jewish people to faith in Jesus.

“The modern nation of Israel is under tremendous stress, surrounded by many countries whose goal is to eradicate them,” Kuykendall told The Pathway. “Southern Baptists and all believers should pray for world leaders to find wisdom to allow all peoples and nations to live in peace.

Additionally, he said, Southern Baptists should pray for believing Jews and Arab Christians who live in the region of Israel/Palestine. Mentioning that two former seminary students now serve in Israel, he added, “We should pray for missionaries in Israel to experience the freedom to ministry.”

“We should likewise pray for Jewish people to find the Messiah,” he said. “Without Christ they are eternally lost. Jesus is the only way to God.”