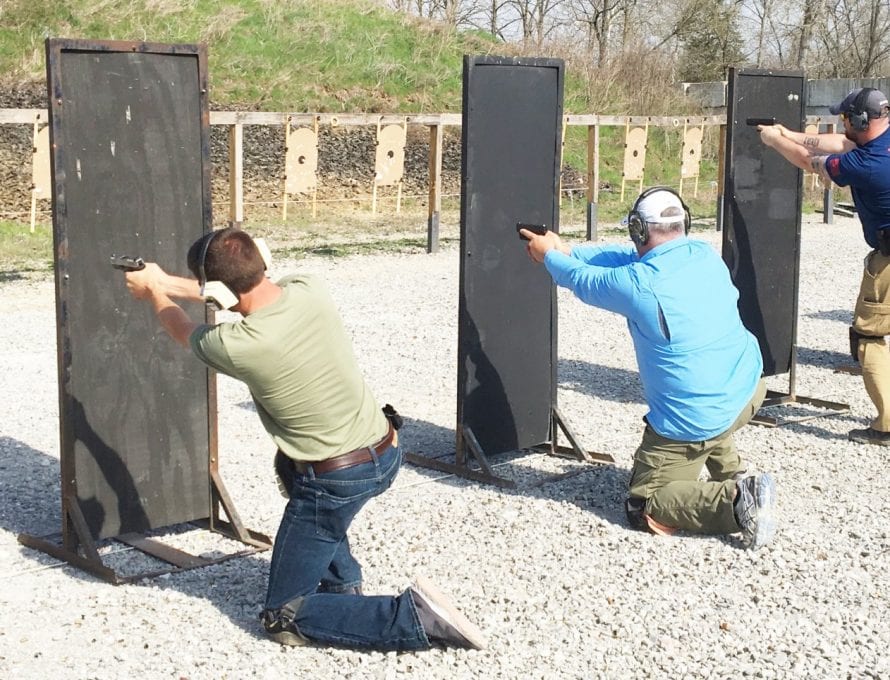 HALLSVILLE – Jason Cline, left, a member of Mineola Baptist Church trains to engage a threat at multiple levels from behind cover with his support – not “weak” – hand at a two-day church security team training hosted by Strategos, Intl. Pathway photos by Brian Koonce

HALLSVILLE – In some ways, it was like any other gathering of Christians. Two dozen pastors and laymen from across denominational lines gathered together, prayed, and discussed various issues facing their congregations. Scripture flowed freely.

But as soon as pleasantries wrapped up, an air horn sounded and they each drew their pistols.

They were part of the first two-day, “Tactical Applications of the Pistol for Church Protectors” training hosted by Strategos, which bills itself as the world’s largest church security ministry. For many, these 16 hours on the range came after two full days of seminars and lectures at an earlier Strategos event in Warrensburg.

While Bible-believing Christians can have different approaches to protecting the flock and some churches may balk at the idea of an armed security team, Jim Cline, the pastor of Mineola Baptist Church said it is an unfortunate necessity of the times.

“We’ve never had any sort of safety program or plan,” Cline said. “We want to be prepared.”

Though everyone at the training said they prayed never they would never have to respond to a threat at church, the desire to develop a plan and be proactive was a common theme.

“Our goal is that every church in America would have a comprehensive safety and security plan from the parking lot to the pulpit,” he said. “Since 1999, there have been more than 1,700 violent church attacks. That’s an increase of 2,380%. In 2017 alone, we had 216 violent church attacks, which averages out to five per state, and one for two out of every three days.”

Young said Strategos tries to base their training and philosophies around Scripture, especially Proverbs 27:12, “A sensible person sees danger and takes cover; the inexperienced keep going and are punished; Matthew 10:16, “Look, I’m sending you out like sheep among wolves. Therefore be as shrewd as serpents and as innocent as doves;” and Acts 20:28, “Be on guard for yourselves and for all the flock of which the Holy Spirit has appointed you as overseers, to shepherd the church of God, which he purchased with his own blood.”

“We’re called to faith and trust,”  writes Strategos president, Vaughn Baker in “The Church Security Handbook: A Practical, Biblical Guide for Protecting Your Congregation in Uncertain Times.” However, “[w]e’re also called to action. We are not called to vigilantism or reaction, but to calm, reflective and sensible measures to safeguard our congregation.”

Led by six police instructors, the Strategos courses emphasized an immediate response to a threat to the congregation. The two days of tactical pistol training involved shooting around cover/concealment, shooting from the “support” hand (the instructors dislike the notion of a right-handed shooter’s left hand being called the “weak” hand), working with a partner to monitor and secure a large area, shooting around and under barriers, interacting with arriving law enforcement, and maneuvering through crowds while keeping the pistol pointed in a safe direction at all times.

“Meek doesn’t mean weak,” barked one instructor, referring to Matthew 5:5. “It means being under control.”

The course also emphasized liability issues, de-escalation techniques, and how to limit exposure to risk in the first place. Sometimes it’s as simple as restricting entry to doors manned by ushers, designating a person to keep their eyes open while the rest of the auditorium bows their heads in prayer, and making sure the team knows where to find a well-stocked first aid/trauma kit.

“It was eye-opening,” Jason Cline, a member of Mineola, said. “I was confident before, but I now ‘know what I don’t know.’ I’ve already called up my buddies and told them they need to take both the indoor and pistol training. Not only will they love it, it will help them be safer and more prepared.”

Such training goes far beyond the relatively simple curriculum in a standard concealed carry course (CCW) – a necessity, Strategos says, for church insurance policies. Tony Cox, also a member at Mineola, said he agrees that church security teams should want to go above and beyond that initial level of training.

“CCW barely scratches the surface,” he said. “They may not have covered every single thing here, but it sure runs the gamut.”