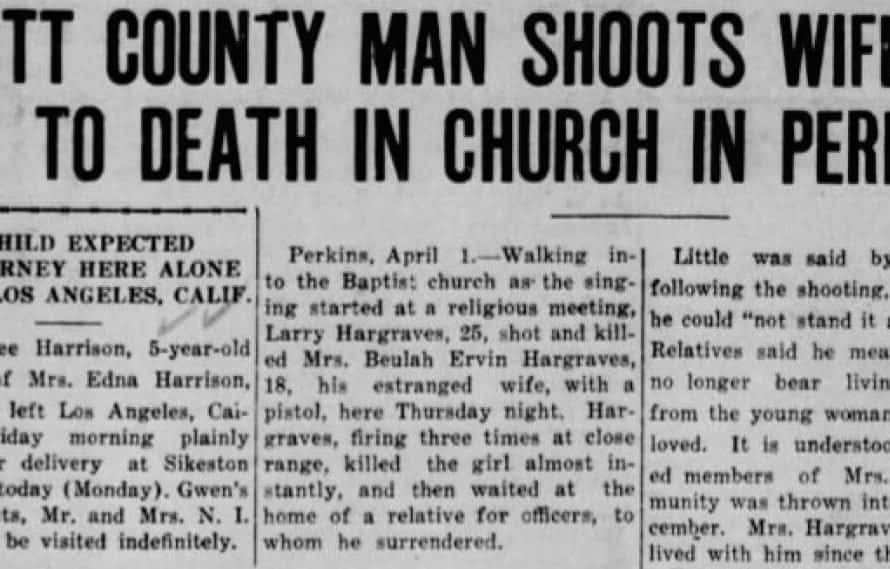 PERKINS – “Man shoots wife to death in church” seems like it could be the latest horrific headline in our modern news cycle, but sin is not a new phenomenon. Juanita Irwin can testify to this. Now 89 years old, as a little girl she witnessed the events that prompted that headline, which topped the April 5 edition of the Sikeston Standard in 1932.

“My cousin and I are the only living people who were there when this happened,” she said. “We were only three years old, but we were there with our parents.”

Three years old isn’t exactly old enough to be able to recount the day’s events – or be traumatized by them – but she heard the story many times over the years from her family. Her father was a deacon and like any good Baptist family, they made sure they were in their pew for the Thursday night revival meeting at Perkins Southern Baptist Church. They were there at 7:15 on the dot for Rev. J.W. Cunningham’s sermon.

Among the 40 or so other worshippers was 18-year-old Beulah Lee Hargraves, the estranged wife of Larry Hargraves. When their brief marriage fell apart, she fled their home in Michigan and returned to her family in southeast Missouri.

The first song of the evening began, and that’s where the Standard picks up the story:

“He walked directly to where Mrs. Hargraves was seated alone at one side of the church, about 35 feet from the door. He advanced toward the young woman, stepping between the bench on which she was seated and one back of it, and when within two or three feet of her, it was said, raised a pistol and fired three times as she turned toward him, still seated.”

All three shots hit her in the head and Beulah died instantly. Her husband, still holding the gun, backed out of the church “watching the crowd, as if hunting for someone else,” the newspaper reported.

Irwin’s family version of the grisly scene says that church members quickly grabbed Beulah’s mother and hid her behind the pulpit, fearing she would be the next target. Her cousin, despite being just three years old himself, claims he remembers the commotion and seeing the slain woman slumped over on the bench. There was so much blood, the church members had to bore a hole in the floor so it would drain.

“You know, that stayed in the church floor for 30 or 40 years until that building was torn down,” Irwin said. “My kids grew up knowing that floor with the hole.”

Hargraves ran to his brother-in-law’s home nearby and waited until the prosecuting attorney and sheriff arrived and arrested him. In jail, a “visibly depressed” Hargraves confessed that he could not “stand it any longer,” and that life was not worth living if she would not live with him.

Four months later during his trial, Hargraves pleaded guilty to murder in the second degree. The newspapers covering the events do not mention how or why prosecutors chose to charge him second degree murder, murder that is intentional but is not premeditated or planned. Because of that, he avoided any chance at being hanged, and was sentenced to life in prison.

Decades later, he was paroled, and actually returned to town, Irwin remembers.

“To me, he looked like a regular old dried up man,” she said.

Hargraves died of tuburculosis soon after his release.