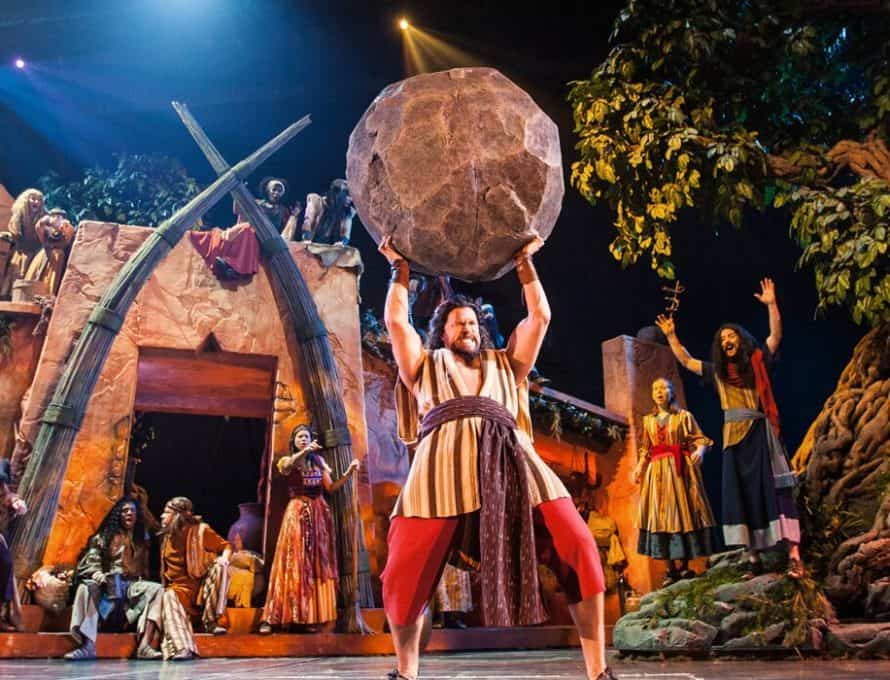 BRANSON – The best superheroes have some sort of flaw. It’s why Batman with his antisocial tendencies and emotional baggage makes for a more interesting story than squeaky clean Superman.

That’s one reason why Matt Neff, the CEO of Sight & Sound Theatres, is so excited about the newest show coming to Branson, a story about a flawed biblical figure who could take on the Hulk in an arm wrestling match: Samson.

“This is one of the most creatively challenging and fun stories we’ve gotten to tell,” he said. “It’s a bit of a dark story about an antihero who makes mistake after mistake and ends up in a pretty bad place.”

Despite those mistakes, Neff said the new show, which will open at the 2,000-seat theater in Branson, March 3, is at its core a story about grace.

“Outside of Jesus, all these people in the Bible are broken and flawed, but God chooses to use them anyway as part of His redemptive plan,” Neff said.

But to experience grace, the hero of the story needs to fall. The biblical account in Judges makes it clear Samson certainly does that. A lion-killing, Philistine-fighting phenom, he succumbs to temptation with Delilah and disobeys God’s orders, losing his sight and his strength. Presenting that reality in a family friendly way was a challenge for the creative team.

“We’ve tried to tell this story in a way that’s real and so that you get the weight and severity of these decisions he’s made, but it’s all through the lens of what issues and struggles he had. Was it about him choosing between Delilah and God, or was it about him choosing between his own will and God’s will? In the end, we’re telling a story that’s safe for everyone from a three-year-old to Grandma and everyone in between.”

Trip Advisor rates Sight & Sound Theatres as Branson’s No. 1 attraction. More than 3.5 million people have seen a Sight & Sound production in Branson since the doors opened ten years ago, including nearly 1 million seeing Moses alone during the past two seasons. In 2017, Sight & Sound staged 325 performances; in 2018 it stages 395.

In Samson, the story is told across a 300-foot stage wrapping around the audiences on three sides (and spilling into the aisles). Besides 44 actors in the cast, Samson features 34 live animals: horses, dogs, pigs and a water buffalo. The climactic scene – spoiler alert for those who have forgotten their Sunday School lessons – features a three-story temple for Samson to destroy.

“What I like about that scene is that it’s not just about the effects – which are amazing and some of the best we’ve done – the way the story builds and builds to that moment. It’s a triumphant, redemptive moment that’s pretty incredible.”

This is not the first time the story of Samson, his fall and ultimate redemption has been brought to life. John Milton – author of Paradise Lost, wrote a play called “Samson Agonistes,” an allegory about the downfall of the Puritans and the restoration of the English monarchy. Handel, of “Hallelujah Chorus” fame, wrote an opera based on the story. Most familiar to readers may be the 1949 biblical epic directed by Cecil B. DeMille, starring Victor Mature and Heddy Lamar.

For more information about the Branson show, go to sight-sound.com.