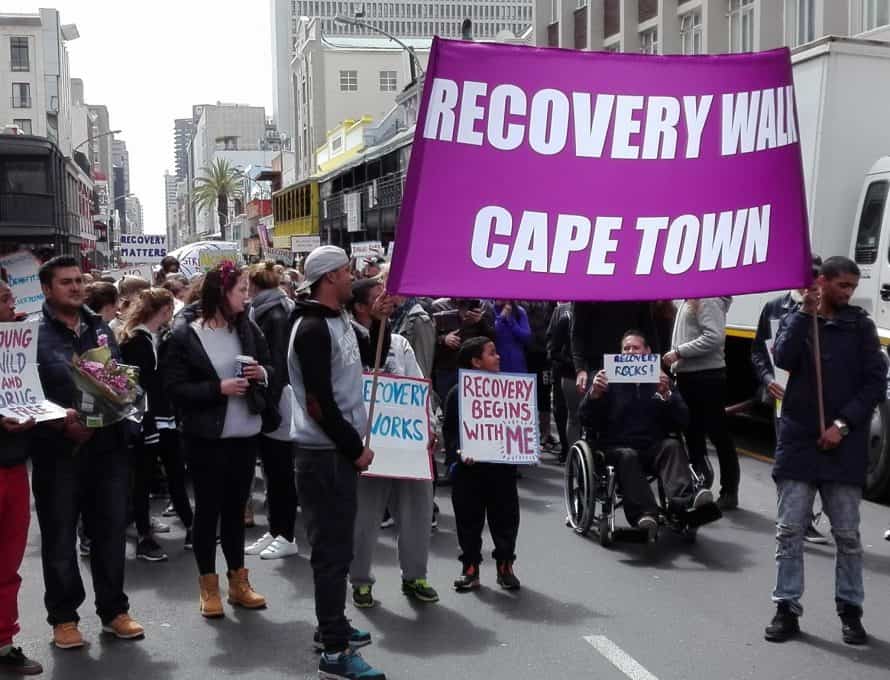 CAPE TOWN, South Africa – Members of the Freeway Ministries here were among South Africans advocating a drug-free lifestyle during a recent parade last month, which was the Global Recovery Awareness Month. Submitted photo.

SPRINGFIELD – Roughly 3,500 people heard of the gospel’s power to transform lives during a revival hosted here, Sept. 7-9, by Freeway Ministries, a Springfield-based outreach and discipleship ministry to ex-cons, drug addicts and other hard-to-reach people.

Nearly 60 people professed faith in Christ during the three-day event, and another 70 people took other spiritual steps towards Christ, according to John Stroup, a member of Crossway Baptist Church here and one of the founders of Freeway ministries.

The “Take Our City Revival” featured Christian music artist Chris August, and Stroup preached throughout the revival. Also, ex-cons and ex-addicts who have found recovery through the gospel gave their testimonies—revealing the impact that the gospel can make on a person and on a community. After each person gave his or her testimony, Stroup would ask the person’s friends and relatives – anyone transformed because of their decision for Christ –to come to the stage. Each time, dozens of people would come.

The impact that one transformed life can have upon a community reminds Christians that “it is worth it to reach out to people who are drug addicts, who are recovering, and who come from prison and from a criminal background,” Stroup said.

“We often think about the negative effect” that drugs can have on a community, Stroup told The Pathway. “But what about the positive effect of somebody who has been transformed, and the impact that they can make.”

Both in this revival and in its day-to-day ministry, Freeway Ministries tries to bridge the divide between the church and the recovery world—a chasm as wide as the gulf between Lazarus and the rich man in Luke 16, Stroup remarked. At the “Take Our City Revival,” Stroup invited government and private recovery groups to set up exhibits and share how they could help people overcome their various addictions and problems. But Stroup insisted that the church must get into the battle to overcome drugs and crime in Missouri and around the world.

For this reason, Freeway has expanded its own ministry efforts throughout Missouri and around the world. As “a gateway into church for the people that are ‘unchurched,” Freeway ministries is not itself a church, but rather an “arm of the church,” existing to help local churches reach out to hard-to-reach people in their communities, Stroup told The Pathway in 2014. Each branch of Freeway is sponsored and operated by a local church. The ministry had its start at Crossway Baptist, Springfield, in 2011 and quickly spread to other towns throughout Missouri. In 2015, the ministry launched its first branch in Omaha, Neb. And this year, it launched its first international branch in Cape Town, South Africa.