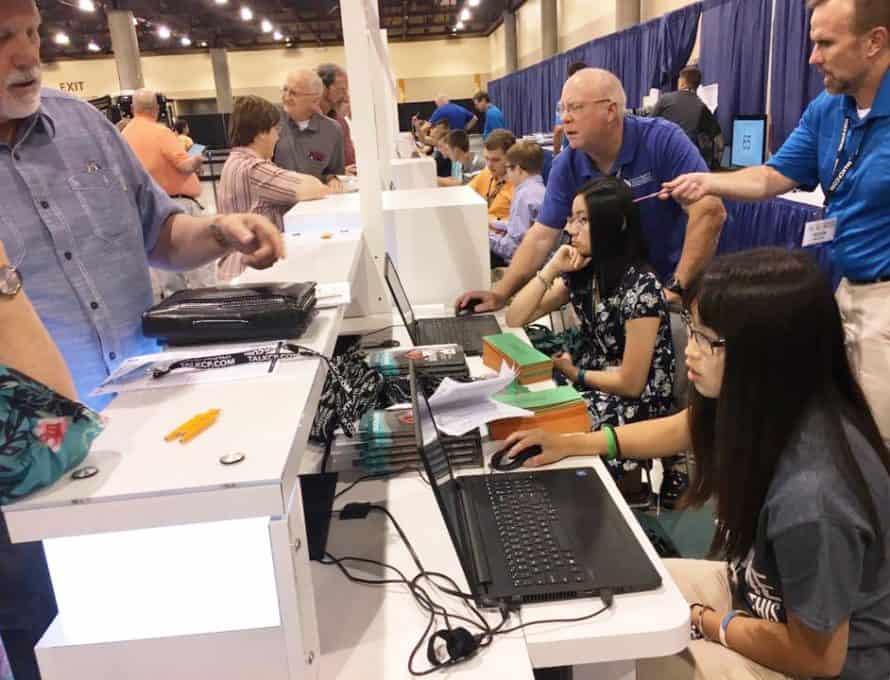 PHOENIX – Leah, 15, (center) and Hannah Currence, 17, of First Baptist, Ozark, gave up part of their summer to be Southern Baptist Convention registration interns and theirs were the first faces messengers saw as they checked in to the annual meeting. Later in the week, their father, Don Currence, was elected as the SBC registration secretary. Photo by Don Currence

PHOENIX – Before Don Currence decided to run for the office of registration secretary of the Southern Baptist Convention, his daughters were the family’s standouts as messengers checked in to the SBC Annual Meeting June 13-14.

The elder Currence, who is the minister of children and administration at First Baptist, Ozark, and was serving as acting registration secretary in the absence of Jim Wells, knew going in that help would be scarce in Phoenix, and sensed an opportunity to work with his two teenaged daughters.

Hannah, 17, and Leah, 15, weren’t initially thrilled at the assignment they’d been roped into by their dad. Though he had been serving as Wells’ right hand man for years, it was their first time not just to work at the convention, but to be there period. They arrived four days before the annual meeting to help set up, and worked pretty much non-stop.

“We kind of stressed out about it at first,” Hannah said, “but it wasn’t too bad once we got to know people and the process.”

The pair were responsble for matching messengers with their churches’ pre-registration as well as passing out the all important voting ballots. In all, they helped process 5,018 messengers, which doesn’t include the thousands of guests or exhibitors.

Meanwhile, Don was busy wrestling with whether or not to run for the office of SBC registration secretary. It was the first time in 15 years hat fellow Missourian Jim Wells was not on the ballot for the office. Currence had served as Wells’ assistant behind the scenes for 12 of those years, but wasn’t 100 percent sure God was leading him to run until the day of the election. He ended making the call the day of the election.

“You can’t do this if you don’t love it,” Currence said. “It’s not a vacation. This allows me to use all my spiritual gifts and work with this team. But more importantly, God opened this door.”

After an initial vote of five candidates, he won the run-off election with 69.2 percent of ballots casts.

Currence joked that after delayed flights, having to set up the registration area and working long hours for five days that his daughters would not speak to him, but they both said they were looking forward to volunteering again next summer when the SBC heads to Dallas.

“I got to see them both in a different light,” Currence said. “They’re not little girls any more. I know I’m biased, but they did a great job, were quick to get stuff done and did whatever they needed to to help out.”

Though the annual meeting is over, Hannah and Leah’s summer of service and ministry is not. The pair will be joining their church on a mission trip to partner with a with a sister church in Louisville, Ky.