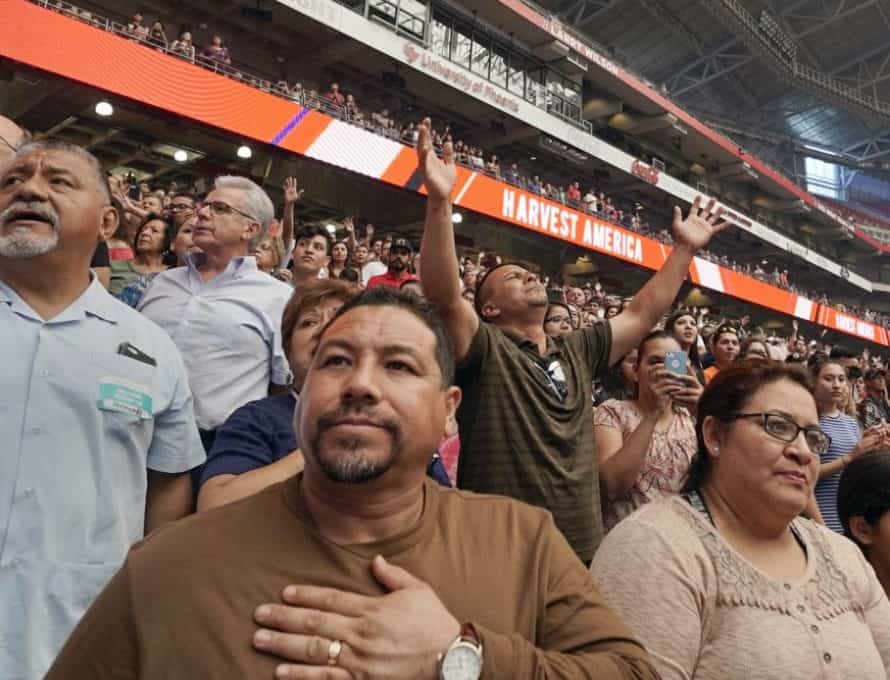 PHOENIX – During worship at Harvest America June 11 at the University of Phoenix Stadium in Glendale, Ariz., thousands of attendees heard the gospel message by California Pastor Greg Laurie of Harvest Christian Fellowship in Riverside, Calif. BP photo by Adam Covington

PHOENIX (BP) – It started Friday, June 9 – the rumblings of an awakening. More than 700 voices worshiped at North Phoenix Baptist Church in Phoenix, Ariz., kicking off the weekend’s Crossover Arizona and Harvest America events.

By the end of that evening, Harvest reported 2,904 salvation decisions at the event with another 494 indicating decisions online.

The events were held in conjunction with this year’s Southern Baptist Convention annual meeting in Phoenix.

Jason Powell, pastor at Harvest Christian Fellowship, was one of three key speakers at Crossover’s opening night of worship along with Levi Lusko, pastor of Fresh Life Church and Laurie, senior pastor of Harvest Christian Fellowship. The speakers shared testimonies, techniques and training for one-on-one evangelism that attendees could use to deliver the Gospel simply and powerfully.

But the day wasn’t over for Crossover participants. As the sun set, the streets of Phoenix, Glendale, Scottsdale and Ave Mesa filled with groups sharing the Gospel during the “Tell Someone” evangelism portion of Crossover.

Steve Gaines, president of the SBC and pastor of Memphis-area Bellevue Baptist Church in Cordova, Tenn., served alongside his wife Donna and Southwestern Baptist Theology Seminary students and alumni Saturday night in Glendale. SWBTS students had hit the streets earlier in the week to begin their annual evangelism efforts in conjunction with Crossover and the SBC annual meeting. Gaines also preached at First Baptist Church in Chandler on June 11.

Frank S. Page, a past president of the SBC who now serves as president and CEO of the SBC Executive Committee, also participated in door-to-door evangelism Saturday with First Southern Baptist Church at Sahuaro Ranch Park and SWBTS students. Sunday, he preached two sermons at Mountain Ridge Church’s Arrowhead campus in Glendale.

The weekend’s events came to a crescendo Sunday night as approximately 38,000 gathered to hear the good news of Jesus live at the University of Phoenix Stadium in Glendale. Another 3,000 host sites joined the crusade event online.

The event started with prayer for the nation and then attendees experienced a night of worship with musical artists NEEDTOBREATHE, Trip Lee, MercyMe, Jordin Sparks, Phil Wickham and Brennley Brown and heard a gospel presentation from Laurie.

Many attendees had been invited to the crusade by friends, neighbors, coworkers, family members or even strangers.

“I came to the crusade because my friend started asking me about Jesus and Harvest America was the perfect opportunity to have her hear the Gospel,” Tammi Gauthier, an Arizona native, said. “The friend I brought was my daughter’s nanny. We fell out of touch for a while. Then, out of nowhere this year, she started reaching out and asking about Jesus. I’d been to a few crusades before but nothing this big. I was so happy to bring her and have her be completely immersed in worship and the Word.”

Laurie said that “people are scared, worried, in anxiety. But let’s have theology without apology. People are hungry for that; they’re hungry to have an honest and hopeful conversation. The last thing that God wants is any man or woman created in His own image to go to Hell. Heaven is His place for all forgiven people and all people can be forgiven at any time if they believe and receive Him into their lives. That’s the message we aimed to share during Crossover Arizona and at Harvest America – a message of hope to the nation.”

NAMB is planning a similar partnership next year as the Southern Baptist Convention meets in Dallas.