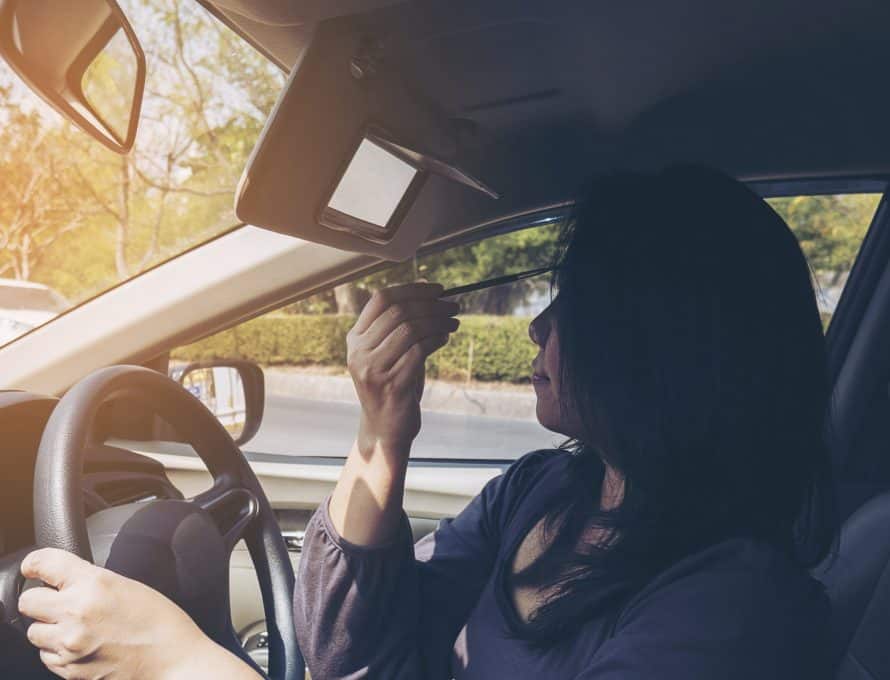 Someone once told me that all crazy women have super-thin eyebrows. I don’t see how I could even begin to argue with that logic. So I pencil. And I pencil strong. I feel I have a lot to prove.

That’s one reason doing makeup in the car is such risky business. One hard stop and a gal could end up with a seriously high eyebrow. No one could ever be as astonished as that kind of brow implies. And please excuse me if the humor here is a bit…ah…highbrow.

The other day, even full-well knowing the risk, I was doing my makeup in the car. My daughter was driving and hit a bad bump at a very crucial eyebrow moment. I immediately shot her a half-angry look. Not because I was really angry. Hey, bumps happen. I gave her the look because suddenly I had one fiercely anger-shaped brow. That’s hard to get rid of. To find some sort of symmetry I had to line and over-line both eyebrows. We’re talking, eyebrows full on. Like, high-beam on. I just combed my bangs extra low and hoped people would read between the lines, as it were. Goofy road-bump.

If anyone knew about bumps in the road, it was Paul. Talk about some hardships. It was enough to furrow any brow. But in Romans 8:18 he tells us that those difficulties were not such a big deal. “For I consider that the sufferings of this present time are not worth comparing with the glory that is going to be revealed to us,” (HCSB).

Difficulties? Temporary. But the glory? It’s forever! Our future is so much brighter than anything dark we could ever encounter here. What hope! A few verses later we read, “Now in this hope we were saved, yet hope that is seen is not hope, because who hopes for what he sees? But if we hope for what we do not see, we eagerly wait for it with patience,” (vv. 24-25, HCSB).

It reminds us that we live between the times. We can’t see the big picture full-beam. We’re living in that space between the bumps in the road and the glory that awaits. But this we know. We can walk in faith and live in confidence even now because our Father has a great plan for our future. He is a trustworthy God who keeps His promises. That means we can wait with assurance—eager, yet patient.

We have a better perspective on life and its challenges when we think about our future and about the temporariness of our here and now. We’re able to focus less on the things that won’t matter in eternity and more on the things of God. Jonathan Edwards, great revival preacher of the 1700’s, prayed, “O Lord, stamp eternity on my eyeballs.”

Stamping eternity on our eyeballs is not about pencils or brows. It’s about keeping our eyes God-ward and staying ever-mindful of our future with Him, with His holy agenda at the heart of all we do. It keeps us mindful of those around us who need Jesus. It helps us sort out our thinking regarding bumps in the road and everything seen and unseen. We’re in this world, yes, but it’s good to know where to draw the line.

Knowing where to draw the line—yeah, that’s also good for eyebrows.