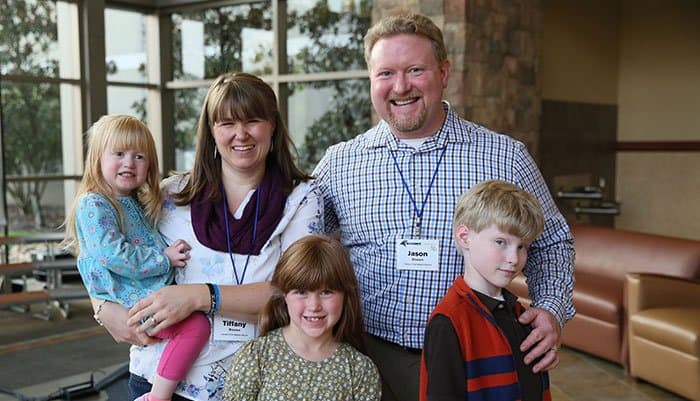 Jason and Tiffany Bowen of Trenton attended the Summit in Sevierville with their children, from left, Evangeline, Charlotte Jean, and Samuel. Photo by Corinne Williams

Tiffany was working her way through the college when she met Jason, then a self-described “lukewarm” Christian who was working at the same restaurant. He asked her out three times before she agreed to date him and it was only going to be for one hour, she recalled.

That one-hour date lasted much longer and the next day she told her stepmother that she had met her future husband. “I had never met someone so transparent and genuine,” Tiffany recalled.

Not long after, she met Jason’s mother, Charlotte Bowen, an International Mission Board missionary nurse.

“When I met with her face to face I was overwhelmed with how she was not like anyone I had ever met,” Tiffany said. “She had no judgment in her heart. She was not OK with me being an atheist, but the love she showed to me was no different than had I been a Christian.”

Tiffany noted that her future mother-in-law explained that “Jesus was alive and that was what made her different because she had a real, personal relationship with Him every day.”

Though she was an atheist, Tiffany had Christian friends despite being raised in a home where going to church was discouraged.

Tiffany began to read the Bible “and my heart started to change,” she recalled. She was sitting in the parking lot of a Knoxville business talking with Jason when God suddenly revealed to her that He was real and alive and that He “would be the Lord of my life for the rest of my life.”

Tiffany said she looked over at Jason and said, “Jesus is the Son of God” and then told him, “I think I just got saved.”

Later, the couple was married in Africa while visiting Jason’s mother. They returned to his hometown of Jonesboro, Ark., and began attending Central Baptist Church where Tiffany was baptized.

After attending the church for about a year Jason was asked to do pulpit supply at an inner city church. He was asked to come back and he did – for about two years. “After the first year I felt God was asking me to pray for my husband because he was going to surrender to His call to be a pastor,” Tiffany said.

She added that she believes God was giving her a “heads up” so she could also pray for herself. “I was not pastor’s wife material,” she laughed.

Sixteen years later (which have included seminary training for Jason and other pastorates) she admitted, “I’m still not but I pray every day that He uses me anyway.”