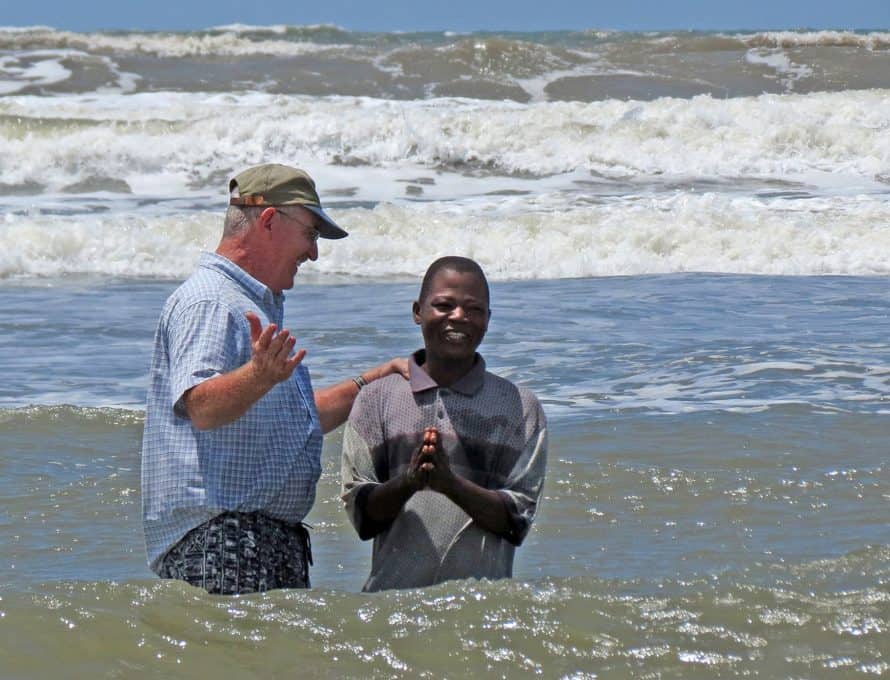 Because of Missouri Baptist's faithfulness, the Missouri Baptist Convention has sent half a million dollars more in fiscal year 2015-2016 than it did five years ago. This increase in giving supports IMB missionaries like John Dina, seen in this photo baptizing new believerJosé Sunte. IMB photo.

In Missouri, year-to-date CP giving is roughly on par with giving at this time last year, and is running 3.61 percent behind the budgeted goal.

Even so, Missouri Baptists are sending more CP funds to the ends of the earth. The MBC has raised its allocations for the SBC from 37 percent in 2011 to 42.5 percent in 2016.

“We are grateful to the Lord for the faithfulness of Missouri Baptists to give to missions in Missouri, throughout North America, and around the world through the Cooperative Program,” said John Yeats, MBC executive director. “Together, we are sending more than half a million additional dollars per year to the SBC than we sent five years ago.”

Yeats continued: “Missouri Baptists have sacrificially kept fewer CP dollars in our state, and sent more dollars to the SBC for support of full-time missionaries, six SBC seminaries, and ethics and religious liberty causes. Meanwhile, they have faithfully supported our Children’s Home, Hannibal-LaGrange University and Southwest Baptist University, and many more ministries that make disciples, multiply churches, and develop leaders” in our state.

“Our Southern Baptist churches have responded powerfully to the call for missions support and ministry support through the Cooperative Program,” said the SBC’s Page.

“I would say two factors are present here – sacrifice and strategic decisions,” he noted. “We thank God for the sacrifice of thousands of churches who truly believe we can collaborate together and do more for the Gospel than we can do alone. This sacrificial giving will minister on the mission field, in theological education and other areas stronger than ever before.

“We are also thankful for the strategic decisions of many of our state conventions who are forwarding more and more to the national level,” Page said in written comments to Baptist Press. “We have just finished five years of increase [from the states], only the third period of time in our history when national CP forwarded from the states has reached or exceeded 38.75 percent. We are thankful for our state partners and thankful for the strategic decisions that many have made.”

In designated giving, the fiscal year’s total of $204,671,725.92 is 4.95 percent above the previous year’s $195,013,412.58. Of this designated amount, $204,135,367.21 was disbursed to IMB and NAMB through the seasonal missions offerings and Global Hunger Relief. The balance was designated for other SBC entities or the SBC Operating Budget. Combined designated gifts to SBC causes and CP Allocation Budget gifts showed a 4.22 percent increase over the same time last year.

“We believe the Acts 1:8 strategy includes local, state, as well as national and international ministries, and we are thankful for our state partners!” Page added.